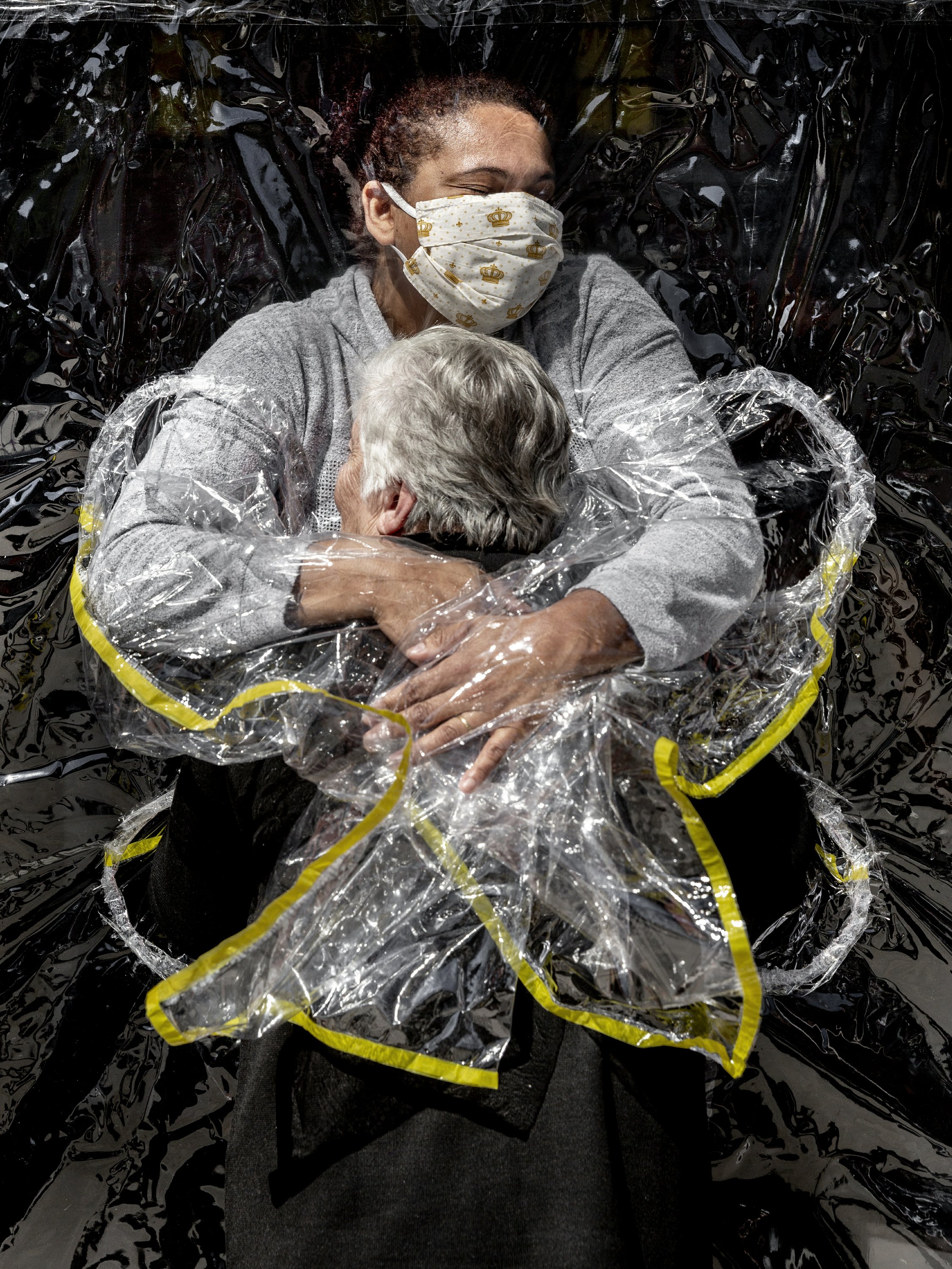 THE HAGUE, Netherlands (AP) – A photo symbolizing the “love and compassion” of an 85-year-old Brazilian woman who receives her first hug in five months from a nurse through a transparent “hug curtain” was named World Press Photo of the Year on Thursday.

The choice of a winning photo portraying the global pandemic was almost inevitable for the contest that covered a year in which news around the world was dominated by the virus that has killed nearly 3 million people, including more than 360,000 in Brazil.

A clear plastic curtain, with the yellow edges folded into a shape that resembles a pair of butterfly wings, offers protection, as does the nurse’s face mask.

“This iconic image of COVID-19 commemorates the most extraordinary moment of our lives, everywhere,” said juror Kevin WY Lee. “I read vulnerability, loved ones, loss and separation, disappearance, but, more importantly, also survival, all in a graphic image. If you look at the image long enough, you will see wings: a symbol of flight and hope. “

The picture taken by Nissen for the agency Panos Pictures and the Danish daily Politiken also won first prize in the general news singles category of the prestigious competition.

“The main message of this image is empathy. It’s love and compassion, ”Nissen said in a comment posted by the contest organizers.

“It’s a really, very difficult, bleak situation and then in that horror, in that suffering, I think this image also brings some light,” Nissen said at an online awards ceremony after being told that there was won the prize and the prize of 5,000 euros. ($ 6,000) accompanying prize.

Second place in the category was a much grimmer COVID-19 image – the body of a suspected coronavirus victim wrapped in plastic at a hospital in Indonesia on April 18 by Indonesian photographer Joshua Irwandi.

The pandemic even reached the category of environmental singles, with American photographer Ralph Pace winning for his image of a curious California sea lion swimming towards a face mask floating underwater at the Breakwater dive site in Monterey.

The judges examined 74,470 photos from 4,315 photographers before selecting the winners in eight categories, including general news, sports, environment and portraits.

The World Press Photo Story of the Year was awarded to Italian documentary photographer Antonio Faccilongo, who works for Getty Reportage, for a series entitled “Habibi” about Palestinian detainees in Israeli jails who smuggle their semen out of detention centers in the hope to start a family.

The winner in the Spot News Singles category was an image that embodies the race debate in America. Evelyn Hockstein’s photo for The Washington Post shows a white man and a black woman disagreeing with the removal of the Emancipation Monument in Washington, DC, showing a freed slave kneeling at the feet of Abraham Lincoln.

The History of Contemporary Issues category was won by Russian photographer Alexey Vasilyev with a series on the film industry in the Sakha region of northeastern Russia. Associated Press photographer Maya Alleruzzo took second place in the category with a story about the Islamic State group that enslaves Yazidi women in Iraq.