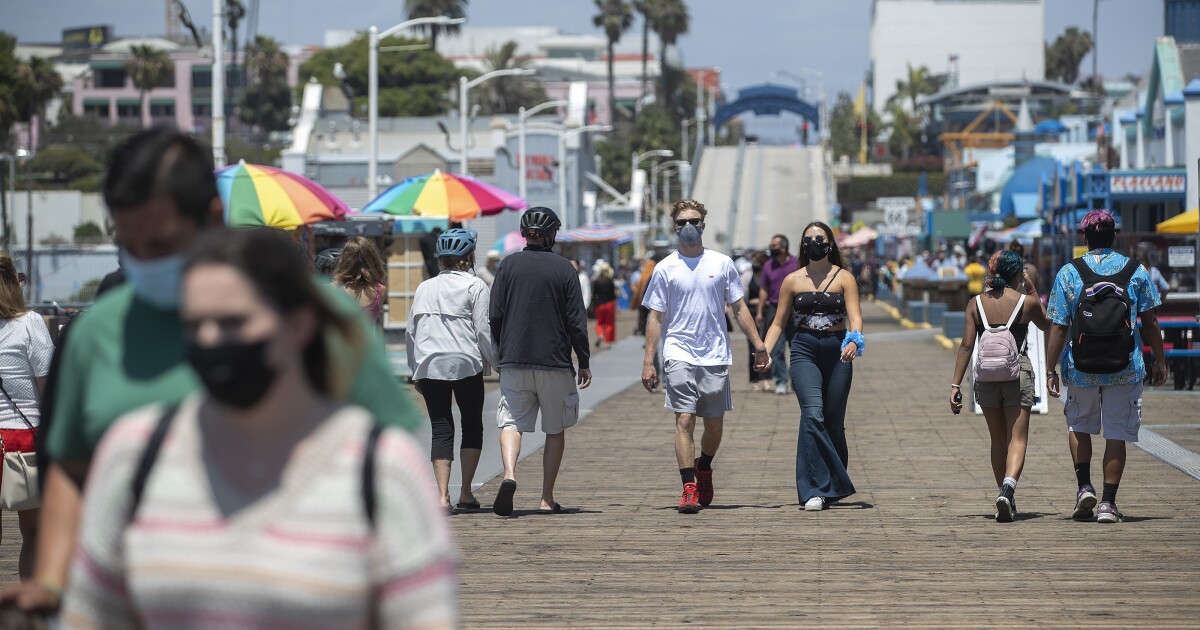 For a brief moment, California returned to bars, beaches, and Botox. But after a few days, much of the state is changing course as hospitals see an alarming increase in people sick with COVID-19, raising the specter of an overwhelmed medical system.

“It’s scary,” said Peter Chin-Hong, an infectious disease expert at the University of California, San Francisco. “We still haven’t recovered from the first phase, and now we have to prepare for the next one.”

While Chin-Hong and other medical experts said California currently has the capacity it needs to treat patients, the future is uncertain. Coronavirus cases rose to more than 220,000 on Monday, progressively increasing in some places, skyrocketing in others and prompting health officials in several counties to demand the closure of bars, beauty salons, and other businesses opened just days ago.

Governor Gavin Newsom said hospitalizations have increased 43% in the past two weeks, while admissions to ICU units have increased 37%. He hinted at stricter state action if counties were unable to contain the outbreaks.

“We don’t like the trend line,” Newsom said. “Let me be honest with you: We are considering a number of other things to move forward, and we will make them public as conditions change.”

Some of the worst outbreaks occur in Imperial and Riverside counties, where ICU beds are nearly full and hospital nurses have gone on strike to protest what they say is understaffed and lack protective equipment.

“When you deliberately don’t hire someone to relieve me, I have to stay on duty,” said Erik Andrews, a nurse at Riverside Community Hospital. “Our professionalism is being exploited.”

Hospital officials denied they were understaffed or protected, but the overwhelming burden of cases in the area prompted Representative Raúl Ruiz (D-Palm Desert), an emergency room doctor, to request that the restrictions be reinstated. and the use of masks.

California authorities have said hospitalizations shouldn’t increase by more than 10% in three days, but more than a dozen counties across the state are missing the mark. California has about 7,880 ICU beds, and about 38% are currently in use by non-COVID patients, according to the Covid Act Now, a collaboration between Stanford and Georgetown universities.

As government officials struggled to regain control of residents weary of the restrictions and eager to celebrate the upcoming July 4 holiday, numerous health officials are frustrated and fearful. Many said that while hospital capacity has increased and more is known about how to treat the disease, those on the front lines still face shortages, stress and disgust because the public is not taking precautions.

“I’m not sure why everyone is so surprised that we go back up. It never disappeared, and we opened “while the mask was” politicizing, “said the doctor, calling it” very frustrating. “

Erin McIntosh, 37, a rapid response nurse at the Inland Empire, said the past few months had been “the worst of the worst.”

“It leaves us with the feeling that we are not enough,” McIntosh said. “I feel like all of this is preparing us to fail.”

But public resistance to the restrictions also remains strong, making it difficult to restore public health protections, some experts said.

“Each and every one of those county health officials faces impossible circumstances,” said David Relman, a Stanford physician.

Unlike in the early days of the epidemic, when much of the virus concentrated in urban areas, infections are now on the rise in northern and inland California counties, putting pressure on medical systems with fewer resources. It has left some medical experts to warn that the state is not experiencing a second wave, but a failure to maintain the flattened curve of the first.

And the virus continues to charge unevenly, hitting communities of color and the elderly the most, and often leaving the young and wealthiest with milder cases that are diagnosed and treated earlier.

A study by Sutter Health in May found that black COVID-19 patients in Northern California were nearly three times more likely to be hospitalized than non-Hispanic white patients and came to the hospital with more severe symptoms. Black patients also die from COVID-19 at higher rates, according to the study and state data.

Sutter Medical Director Stephen Lockhart said he believes those disparities will continue, in part because people of color make up a larger percentage of the essential workforce, cannot afford to stay home when they get sick, and often live in settings. multigenerational. where the infection is passed on to others.

“It is very obvious that COVID-19 has removed the band-aid from existing inequalities,” said Lockhart.

Epidemiologists say it is not yet clear if the increase in cases will cause a similar increase in deaths. Many of the newer infections are younger individuals. And the treatments have improved survival rates, medical experts said.

But one model, according to the Covid Act Now, predicts that deaths in California could reach 24,000 in the next month based on current trends. Currently, about 5,900 Californians have died from COVID-19 related causes.

Newsom said the stay-at-home order launched in March bought time to prepare for upcoming cases, including emergency sites that were closed weeks ago but could be reopened.

The governor said the state has about 30,000 hospital beds available for COVID-19 patients in the traditional hospital system, including about 3,300 beds available in the ICU.

As of Monday, he said 4,776 people were hospitalized with a confirmed case of the virus.

“So the numbers are going up, but our ability to manage and absorb is also significant,” Newsom said.

But those beds are unevenly distributed across the state. Newsom said Imperial County, which has experienced 23% positivity rates, has exceeded its hospital capacity.

In Los Angeles, there are indications that cases could overload local facilities if they are not reduced.

“While we anticipate increases in cases as sectors reopened, we did not expect increases to be as high as quickly,” Barbara Ferrer, director of public health in Los Angeles County, said Friday.

San Francisco and the Bay Area are also experiencing a “spike” in COVID-19 infection rates and the city will have to “pause” its reopening, the city’s chief health officer said Friday. The seven-day average number of COVID-19 patients at hospitals in Contra Costa County increased 75% from June 15 to 29, the county reported Monday.

“We went, we went from yellow to high orange, and if that continues for the next few days, we could be in our red zone,” which could trigger further restrictions, he said. “Our curve is not flat at the moment. … In fact, that curve is becoming increasingly vertical. “

Health officials are also alarmed by the large outbreaks in California jails and prisons. In San Quentin, just north of San Francisco, more than 1,000 inmates tested positive. The Fresno, Lassen County, and Riverside facilities also have outbreaks, as do numerous county jails. Health officials said those patients will likely end up being treated at community hospitals if their cases become severe, adding another pressure point.

“The prison system doesn’t have that level of care for inmates, so when they start to really go wrong, we have to take them to the community,” said Chin-Hong, a doctor at the University of California, San Francisco.

Health experts said the growing number will continue without the kinds of social interventions implemented during the first days of the pandemic. If the spread doesn’t stop soon, they warn, it may be impossible.

“It could get to a point where there is literally too much disease to handle,” Relman said.

Harvard announced earlier this week that all course instruction will be delivered online, even for …