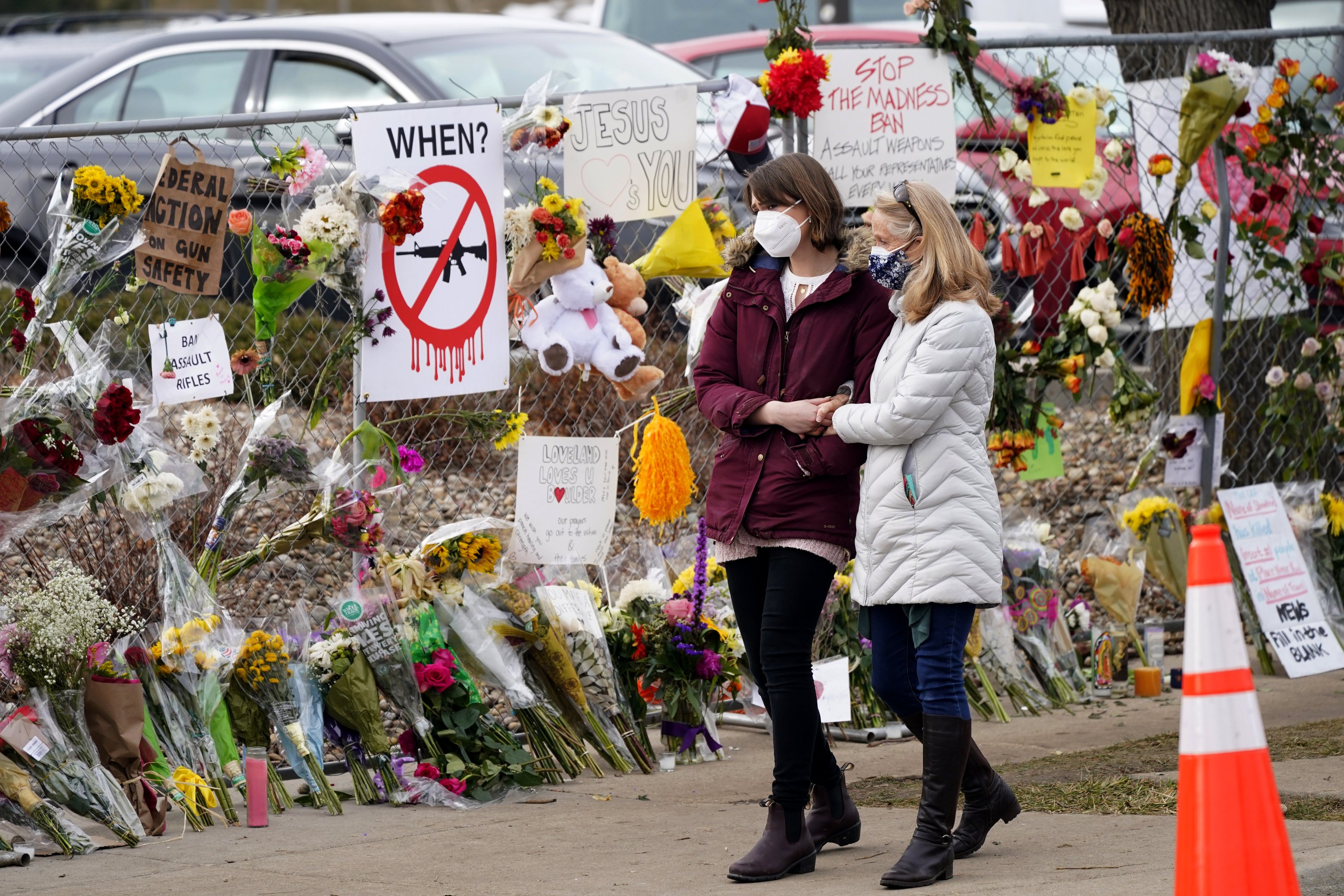 BOULDER, Colorado (AP) – The suspect in the Colorado supermarket shooting appeared in court for the first time Thursday, and a defense attorney immediately asked for a mental health evaluation before the case against him continues. .

Ahmad Al Aliwi Alissa, 21, did not speak during the brief hearing except to say “yes” to a question from the judge, who informed him that he is charged with murder in the attack that killed 10 people, including a police officer from Boulder. Alissa is also charged with attempted murder for allegedly shooting another police officer, who was unharmed.

Alissa did not plead guilty, which will come later in the judicial process. He has been jailed without bail.

The young man entered the court in a wheelchair, allegedly due to a gunshot wound to the leg suffered on Monday in a shootout with police. He seemed alert and attentive, rolling his knees from side to side, his eyes darting from his lawyers to the judge. He was wearing a mask and purple short-sleeved jumpsuit.

His attorney, public defender Kathryn Herold, did not provide details about his health. At Herold’s request, Alissa’s next hearing will not be scheduled for two to three months to allow the defense to assess her mental state and the evidence gathered by investigators.

“Our position is that we cannot do anything until we are able to fully evaluate Mr. Alissa’s mental illness,” Herold said, adding that the defense cannot begin that evaluation until it receives evidence from investigators.

A law enforcement official briefed on the shooting previously said that the suspect’s family told investigators they believed Alissa suffered from some form of mental illness, including delusions. The official was not authorized to speak publicly and spoke to The Associated Press on condition of anonymity.

About 2,000 people gathered for a vigil Thursday night in the parking lot of a high school less than a mile (1.6 kilometers) from the shooting site. Many held candles and roses while holding arms or hugging at Fairview High School, near the base of the snow-capped foothills of the Rocky Mountains.

After a singer led the crowd on “Amazing Grace,” Nicole LiaBraaten, local leader of the gun control group Moms Demand Action, asked everyone to “take a healing breath.”

“Our hearts are broken and our festering wounds reappear once more. And this time it’s for the whole world to see, ”said Liabraaten, whose group helped organize the vigil.

US Rep. Joe Neguse, whose district includes Boulder, told the crowd that he had spoken with some of his fellow Democrats about curbing gun violence.

“It doesn’t have to be this way,” he said, drawing cheers.

Alissa’s legal team includes public defender Daniel King, who represented Colorado theater gunman James Holmes, as well as Robert Dear, who is accused of killing three people in a 2015 attack on a Planned Parenthood clinic in Colorado. Springs, two cases in which a mental illness occurred. a factor.

Depending on what they learn from the investigators about Alissa’s mental health, her attorneys may ask the court to order an examination by a psychiatrist or psychologist to determine whether she is competent to stand trial.

If defendants cannot understand the process and help their attorneys, the process can be delayed to see if treatment, such as medication, can prepare them for trial.

A defendant with mental illness could eventually plead not guilty on grounds of insanity, as Holmes did in the 2012 shooting at an Aurora movie theater that left a dozen dead. It would be up to a jury to decide whether the defendant distinguished right from wrong at the time of the crime, the state’s legal definition of insanity.

During court proceedings on Thursday, five deputies with black mourning bands on their badges were close. Boulder police tweeted Thursday that they used the slain officer’s handcuffs, Eric Talley, to drive the suspect from a hospital to jail earlier this week, and told him so.

Screenshots of what was believed to be Alissa’s Facebook page hint at fears that he was secretly tracked on his phone and reflect his interest in Islamic teachings, immigration and martial arts. The screenshots and dozens of posts were captured by online extremist tracking firm SITE Intelligence Group.

In July 2019, Alissa wrote that her phone was being hacked by “racist Islamophobic people.” At another point, he wrote that his old high school had likely had access to his phone and asked Facebook followers for advice on how to stop it.

Alissa was convicted in 2018 of assaulting a high school classmate, according to police documents. A former classmate told the AP that he was kicked out of the wrestling team after yelling that he would kill everyone after a loss in a practice match.

After a white supremacist killed 51 people in the New Zealand mosque massacre in 2019, Alissa called the dead “victims of the entire industry of Islamophobia that smeared them.” Three months later, he posted a link to a PBS story on how immigrants help the economy, writing, “Why Refugees and Immigrants are Good for America.”

“What Islam is really about,” he wrote in a Facebook post that referred to a list of teachings from the Quran, which included “be good to others” and “hold back anger.”

In other posts, she urged her followers to donate to charity, described abortion as “disgusting” and said she was opposed to gay marriage.

“There was no indication on his Facebook account that suggested radical views of any kind, be it Islamist, anti-Trump or anything else,” said Rita Katz, executive director of SITE, which analyzed the posts. “He mentioned Islam on his Facebook, but never to the extreme.”

Thursday’s court appearance was the first time Alissa appeared in public since her arrest Monday inside King Soopers supermarket. He was last seen handcuffed and driven out of the supermarket by the police. He had removed all his clothing except shorts before being arrested.

According to two law enforcement officials, Alissa was born in Syria in 1999, immigrated to the United States as a child, and later became an American citizen. You would need to be a citizen to buy a gun. The officials were not authorized to speak publicly and spoke to the AP on condition of anonymity.

An AR-15-style weapon recovered from the supermarket is believed to have been used in the attack, said a law enforcement official briefed on the shooting who was not authorized to speak publicly and spoke to the AP on condition of anonymity.

Associated Press writers Bernard Condon in New York, Jim Anderson in Denver, Michael Balsamo and Colleen Long in Washington, and AP staff members from across the United States contributed to this report. Nieberg is a member of the staff of the Associated Press / Report for America Statehouse News Initiative. Report for America is a nonprofit national service program that places journalists in local newsrooms to report on uncovered topics.