The prime minister is disguised as Clark Kent as his Halloween alter ego for 2017.

On his way to question period today, Trudeau descended the stairs sporting slicked-down hair and a blue suit with a bright red tie, surprising the badembled staff and journalists who were waiting for him.

As he got to the bottom of the stairs, he opened his shirt to expose the Superman costume hidden underneath, quipping in both official languages that it was a big shock to see the prime minister dressed as a journalist, but “you know, gotta do it.”

Trudeau has a history of having fun with Halloween, choosing Han Solo of “Star Wars” fame for his first year in office.

Last year he went as a pilot from the French children’s book “Le Petit Prince,” while his son, Hadrien, went as the title character.

Trudeau wasn’t the only MP in the House getting into the Halloween spirit. 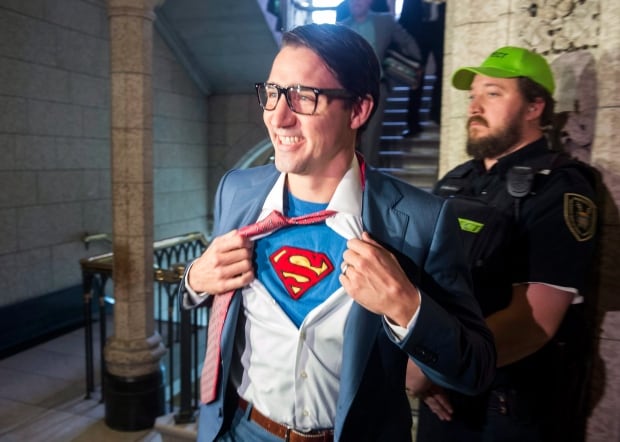 Prime Minister Justin Trudeau shows off his costume as Clark Kent, alter ego of comic book superhero Superman, as he walks through the House of Commons, in Ottawa on Tuesday. (Adrian Wyld/Canadian Press)

Some other MPs also dressed up for Halloween with Liberal MPs Ken McDonald, Avalon, and Brian May, Cambridge, stepping into the shoes of the Muppets’ Statler and Waldorf.

Statler and Waldorf are sitting in for myself and @_BryanMay today in the house. Chances are, they’ll have something to say #HappyHalloween pic.twitter.com/Ppdnp1H3ql

Mark Holland, the Liberal MP for Ajax, channelled Will Ferrell’s Ron Burgundy from the film Anchorman: The Legend of Ron Burgundy.

The NDP’s Irene Mathyssen, the MP for London-Fanshawe, dressed up as a witch and used the occasion to tout the advent of birth control.