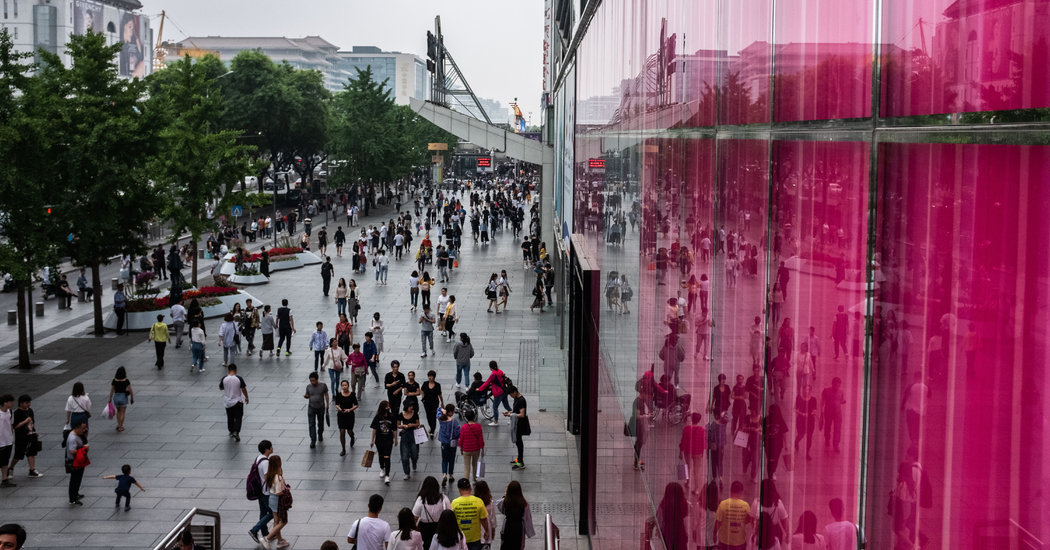 BEIJING – China's growth fell at its slowest pace in nearly three decades, officials said on Monday, due to the resurgence of trade tensions with the United States and persistent financial problems cause an increase in the cost of one of the economic engines most vital in the world.

Chinese officials said the economy grew 6.2 percent between April and June compared to the previous year. While that economic growth would be the envy of most of the world, it represented the slowest pace in China since the start of the modern quarterly record in 1992. That marks a significant slowdown since the beginning of this year, when growth reached 6, 4 percent. , equaling a minimum of 27 years achieved during the global financial crisis a decade ago.

Prime Minister Li Keqiang set a goal in March for economic growth to be between 6 and 6.5 percent this year. Monday's figures fell within that range.

But much of the growth in the quarter may have taken place in April and early May, when public confidence was higher due to a tax cut in March and heavy spending on infrastructure at the beginning of spring. The trade talks broke on May 10 and President Trump raised tariffs on Chinese products, a step that damaged consumer confidence within China. Growth at the beginning of the quarter also would have taken place before the controversial takeover of a bank at the end of May affected financial confidence.

"Economic conditions remain severe both at home and abroad, global economic growth is slowing, external instabilities and uncertainties are increasing, unbalanced and inadequate development at home is still acute, and the economy is under a new downward pressure, "said Mao Shengyong, spokesman for China's National Bureau of Statistics, at a press conference.

Mao played down the effects of trade and said that China's economy is increasingly dependent on consumption.

Monthly economic data, particularly for imports, suggest that the second quarter began strongly but then slowed down. "There was certainly an increase in activity until April," said George Magnus, a long-standing specialist in the Chinese economy who is now at the University of Oxford. "Something happened in May."

The number may also underestimate the extent of the slowdown. Economists widely doubt the veracity of the Chinese global growth figure, which shows much more stability than comparable figures from the United States and other countries.

Some sectors of the Chinese economy are doing quite well. The strongest sector seems to be the construction of infrastructure, largely paid with money lent by local, provincial and national government agencies. Retail sales also increased.

The biggest obstacle for the Chinese economy lies in trade, which grew strongly in the last three decades, but has stopped growing in recent months. Exports fell 1.3 percent in June from a year earlier, the government said on Friday, and imports fell 7.3 percent.

While the trade war has affected US purchases from China, the economic weakness in Europe and many Asian countries has caused demand abroad to weaken much more than in the United States. Last week, Singapore unexpectedly announced that its trade-dependent economy had shrunk at an annualized rate of 3.4 percent in the second quarter.

"The economy is definitely in a broad decelerating trend because the world economy is slowing down, so exports are slowing," said Larry Hu, China's chief economist at Macquarie Capital, the investment banking unit of a Great Australian multinational.

China's problems are rooted not only in trade, but also in a debt-laden financial system that has been affected by a series of major upheavals in recent weeks.

On May 24, Chinese financial regulators took over Baoshang Bank in Inner Mongolia, a small institution that is part of a financial empire previously controlled by Xiao Jianhua, a financier who disappeared under the custody of government investigators two years ago. Regulators tried to force some of their larger creditors to accept losses instead of rescuing them as a way to teach financiers to be more careful about where they deposit money from their institutions.

The problems in some of the shady corners of China's financial system have also scared investors. China's shadow banking system plays an important role in the financing of real estate projects and other private companies. But managers of some riskier investment products have struggled to make high interest payments to investors in recent weeks. In some cases, they have also had problems paying the principal.

These incidents have caused a wider change in recent weeks away from the riskier investments. Both institutions and households have been investing money in larger and more stable financial institutions administered by the central government.

Large state-controlled banks have directed most of their loans to state-owned companies. This long-term trend has affected the real estate market and the private sector in general.

Regulators have repeatedly urged big banks to lend more to small businesses and the private sector, and Mr. Li, the prime minister, He did it again on July 2. But these exhortations have had limited effect so far. Bank loan officers worry that they may be blamed, or even investigated for corruption, if they grant large loans to private companies with problems that then fail as the economy weakens.

Andrew Collier, the managing director and founder of Orient Capital Research, an investment and economic research firm in Hong Kong, said the problems in Baoshang and in the shadow banking system had affected financial markets, but they seemed to have been controlled, at least until now.

"The Chinese central bank is watching closely, and for now will use quiet means to avoid any unstable financial scam," he said.

Economists are looking at other possible warning signs, such as inflation. The price increases have been moderate, according to official statistics. But many in China complain that the real cost of living is rising rapidly, particularly for food, but also for rent and other daily expenses.

Industrial production has weakened this year, as has private sector investment. Home sales have slowed as buyers look for more difficult offers, but sellers have been reluctant to reduce prices. Automobile factories have Production dropped dramatically in response to weak sales, although there were signs last month that consumers' interest in buying luxury cars could finally stabilize.

The protracted trade war has led many multinational companies to look for ways to Change supply chains to other places. But many continue to invest in China to supply China's own market and others, especially in Asia.

"The Chinese government will continue to work hard to create a more stable, fair, transparent and predictable investment environment," Gao Feng, spokesman for the Ministry of Commerce, told a news conference on Thursday.

He later added that "China has not experienced large-scale foreign capital withdrawals."

For now, however, the economy continues to function to a large extent because the Chinese government is injecting huge sums of money into infrastructure. It is building high-speed rail lines, huge road bridges, ports and other facilities to connect cities and towns increasingly smaller and less rich to the rest of the country.

That infrastructure makes it easier to do business and move, even in some of the poorest and most remote areas of China. But bankers and economists worry about whether any of these investments will ever earn enough to cover their cost.

"There is a very weak commercial base," Magnus said, "for this spending on infrastructure fueled by credit."