CD Projekt RED has just issued a statement in which they acknowledge that they are victims of a cyberattack, the attackers managed to enter their internal network by accessing sensitive data and the source code of their famous games.

The company has already had a difficult year and things seem to be getting worse. In a press release posted on Twitter, CD Projekt RED included a screenshot of a plaintext ransom note that the intruder left on their servers. The source code for Cyberpunk 2077, The Witcher 3: Wild Hunt, Gwent “and an unreleased version of The Witcher 3 (probably the remastering) have been hooked or encrypted. If you read the note, it doesn’t end, there are private CDPR documents. financial, administration, legal, human resources and more were victims.

The CDPR stated that it will not give in to the attacker’s requests and has contacted the police. The hacker for his part gives CD Projekt RED 48 hours to contact him / them for an agreement, however, what is demanded has not been listed.

Earlier today, leaks of possibly legitimate source code began to appear on online forums, as noted on Twitter by cybersecurity account VX-underground. This initial leak is believed to include the source code for CDPR’s virtual card game Gwent. The files were posted on Mega.nz and quickly removed. However, it didn’t take long for the content to spread on the most famous hacking forums. A site called CyberNews has already downloaded these files and verified that they are actually the source code for Gwent, the card game released by CD Projekt in 2016. 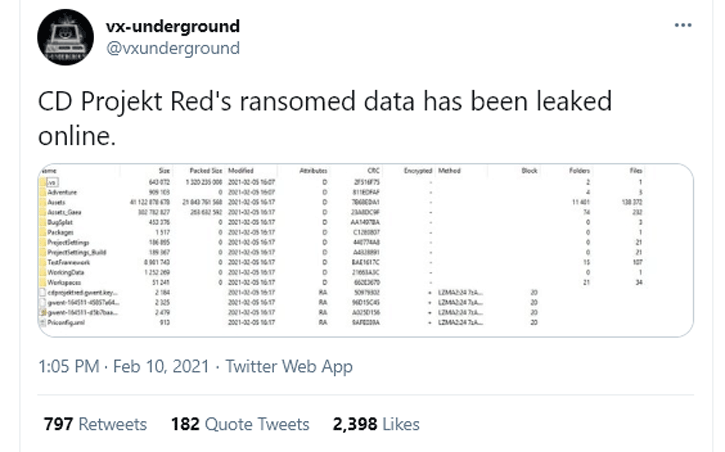 We assume that this is an actual auction by a real seller who obtained the data. The seller offers to use a guarantor and allows only those who have a deposit to participate, a tactic many sellers use to show they are serious and to make sure no scam occurs, ”said a spokesperson for KELA (a company that monitors the dark web) said. An auction offers source code files for the Red Engine and CDPR game releases, including The Witcher 3: Wild Hunt, Thronebreaker: The Witcher Tales spin-off, and the recently released Cyberpunk 2077. The stolen material is also believed to include internal documents, although it is unclear what types of documents or additional material the full cache includes.

KELA says the auction’s starting price is $ 1 million, with higher bids in increments of $ 500,000 and a purchase price now of $ 7 million. Only users who deposit 0.1 bitcoins can participate, which is why Kivilevich believes that hackers are serious about organizing the auction and that the material for sale is probably legitimate because it guarantees that no one participating in the auction is trying to scam sellers.

Turns out there has been a source code for the bidder for Cyberpunk 2077, The Witcher 3, the Gwent card game has been sold. According to cyber specialists, the seller would have received a “satisfactory” offer outside the auction, so they closed it. Not everyone is convinced that the data has actually been sold. According to security analyst Emsisoft, there may not be any potential buyers. The criminals would then have stopped the sale to give the impression that the source code has been sold.

Gabe Newell talks about Cyberpunk 2077 and sympathizes with CD Projekt – 01/24/2021 09:31 AM
Valve’s Gabe Newell doesn’t really need an introduction; the man Valve, Steam, Half-Life and more talked about what happened to Cyberpunk 2077, the most anticipated game in recent years …

CD Projekt Apologizes For Cyberpunk 2077 Release And Shows 2021 Roadmap – 01/15/2021 08:51 AM
The launch of Cyberpunk 2077 was noticed by everyone. Some are better with bugs and performance, others get incredibly choppy. Yesterday CD Projekt issued a statement apologizing …

CD Projekt RED Apologizes for Buggy Cyberpunk 2077 Release, Offers Refunds – 12/14/2020 3:26 PM
The launch of Cyberpunk 2077 just before the weekend has been the subject of much debate. We surely looked at the game from a PC perspective only, and even with a 1500 USD graphics card you can’t even …