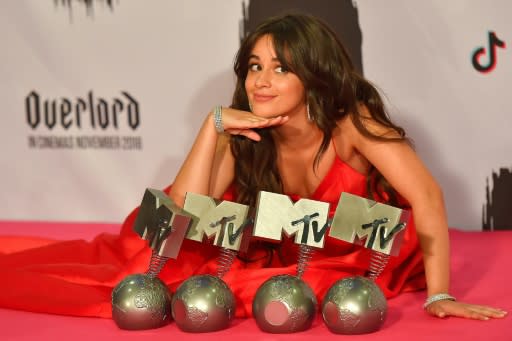 The American singer Camila Cabello took the MTV Europe Music Awards on Sunday, winning the best song with her hit "Havana", as well as the best artist and the best video.

"This year has been the best of my life," said the 21-year-old Cuban native at the event in Bilbao, in northern Spain.

Cabello had opened the show presented by American actress and singer Hailee Steinfeld with a version of her "Havana" of Latin influence.

She is recently winning prestigious awards at the MTV Video Music Awards in August – artist of the year and video of the year – after her album "Camila" reached the top of the US charts in January.

The audio version of "Havana," featuring rapper Young Thug, has had more than 1.3 billion views on YouTube.

Cabello had six nominations, followed by five for the singer Ariana Grande and rapper Post Malone and the Canadian artist Drake and the British Dua Lipa with four.

With two awards, for the best hip hop artist and the best look, the American rapper Nicki Minaj took over, making two appearances on stage, with the French DJ David Guetta and the American singer Jason Derulo.

Dua Lipa won the best pop artist, while the American group Panic! At the Disco he won the best alternative artist and Marshmello got the best electro artist.

The veteran American Janet Jackson was crowned as a "global icon", a title previously awarded to U2, Queen, Whitney Houston and Eminem.

She added: "I am with you, you are my sisters".

Created in 1994, the MTV EMA is one of the two main shows organized by MTV, with its Video Music Awards that have been held in the United States since 1984.

Cabello opened with a version of his "Havana" of Latin influence.

"You are my sisters," said Janet Jackson, accepting the title of "global icon."