By picking up a signal from a distant galaxy, Israelis challenge black hole assumptions 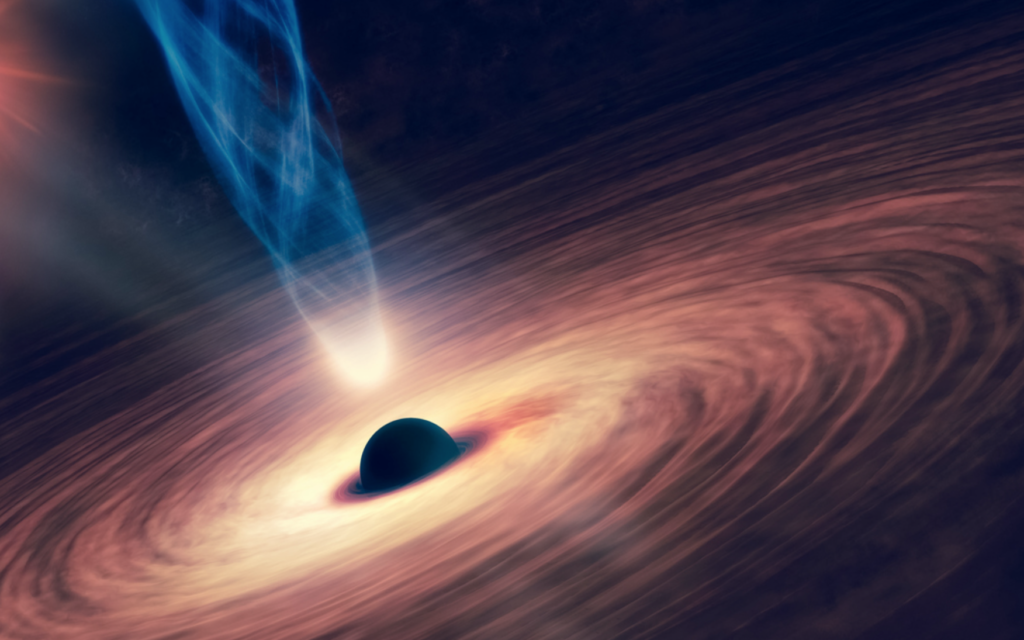 Israeli researchers have detected radio emissions from a distant galaxy that they say can radically change the understanding of how black holes behave.

When stars get close to black holes, they run the risk of breaking apart. If so, much of the material is expected to be consumed by the black hole, in a process that is supposed to take place in a few days and takes several weeks.

But physicists at the Hebrew University of Jerusalem and Tel Aviv University are raising the possibility of a still unexplained process that causes some black holes to go months or years before devouring the last remnants of a destroyed star.

“There seems to be a physical process that we don’t yet understand that causes a long delay between the destruction of the star and the accumulation of material from the black hole,” Hebrew University physicist Assaf Horesh told The Times of Israel.

Illustration of a star ripped apart by a black hole. The stellar debris then accumulates in the black hole. (Elen11 via iStock by Getty Images)

The peer-reviewed journal Nature Astronomy just published the research of Horesh, Tel-Aviv University’s Iair Arcavi, and NASA’s Swift Space Telescope Director Brad Cenko. After observing optical radiation from the destruction of a star in a galaxy 700 million light-years away in 2015, they began looking for radio emissions, hoping to detect them for a short period.

After the destruction of a star, physicists believe that it is common for some material to enter the black hole that caused its death. As part of this process, other materials are ejected by jets caused by magnetic fields around the black hole. Since it is thrown backwards at high speed, this is believed to create shock waves that generate radio emissions.

Scientists have experience detecting this immediately after the destruction of a star becomes observable on Earth, but Horesh and his colleagues ended up breaking new ground by detecting emissions over a four-year period.

“We saw optical radiation after the star was destroyed, and then there were no radio emissions for months,” said Horesh, lead author of the new research. “We decided to give him what we thought would be one last chance. Suddenly, six months later there was a radio broadcast, which vanished for a year.

Diagram showing the time scale of detection of radio emissions by Israeli researchers after the destruction of a star. (Courtesy of Dr. Assaf Horesh, Dr. Iair Arcavi, et al)

“Then four years after the initial observation, we found that once again there was a very strong signal.”

He said the research suggests that the period during which a black hole consumes material from a star and spews out other material, generating radio emissions in the process, is longer “and somewhat more chaotic” than previously assumed. He added that his team is looking to expand their research by identifying more radio transmissions from various galaxies.

As an environmental reporter for the Times of Israel, I try to convey the facts and science behind climate change and environmental degradation, explain – and criticize – official policies that affect our future, and describe Israeli technologies that can be part of the solution.

I am passionate about the natural world and disheartened by the regrettable lack of awareness of environmental issues displayed by the majority of the public and politicians in Israel.

I am proud to do my part to keep The Times of Israel readers informed on this vital subject.

Your support, through membership in The Times of Israel Community, allows us to continue our important work. Would you join our community today?

For as little as $ 6 a month, you can help support our quality journalism while enjoying The Times of Israel AD FREEIn addition to accessing exclusive content available only to members of the Times of Israel community.