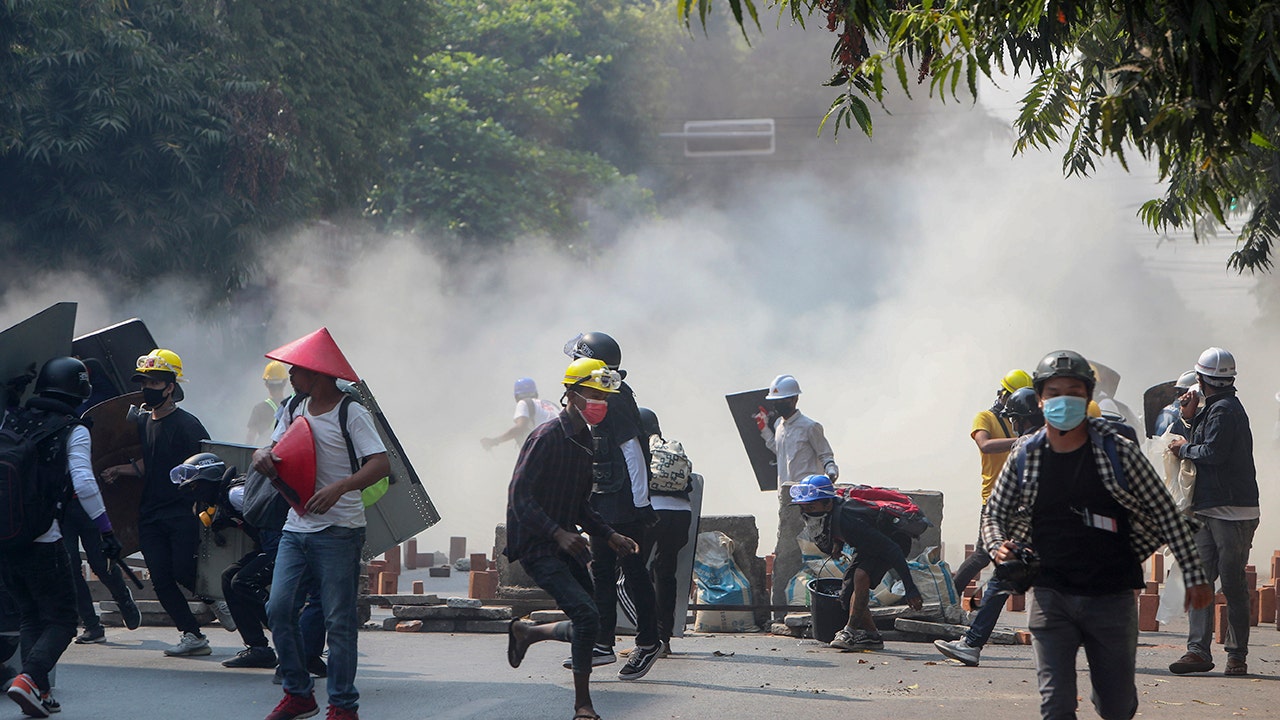 At least nine protesters were killed by Burmese security forces on Wednesday when the army began to crack down on demonstrations against last month’s military coup, according to a report.

Protesters have taken to the streets across the country since the army toppled elected leader Aung San Suu Kyi on February 1. She was arrested along with President Win Myint and most of the members of his administration.

The protesters are demanding that Suu Kyi return to power, defying false accusations of fraud by the military in her party’s landslide victory in November.

Wednesday’s deaths add to more than a dozen people killed by police during the protests and more than 1,000 arrests, Reuters reported. Confirming reports of protester deaths has been difficult amid the chaos and a general lack of official news.

BURMA PROTESTERS TAKE THE STREETS THE DAY AFTER THE DEADLY CRACKD

Two protesters were killed in Mandalay, the country’s second-largest city, on Wednesday, one in the largest city of Yangon and one in Myingyan, Reuters reported.

The Monywa Gazette reported another five dead, according to Reuters.

Anti-coup protesters flee tear gas and charge at riot police and soldiers in Mandalay, Myanmar, on Wednesday, March 3, 2021. Protesters in Myanmar took to the streets again on Wednesday to protest the military’s seizure of power last month. (AP Photo)

“They opened fire on us with live bullets,” a protester in Myingyan told Reuters. “One was murdered, he is young, a teenager, he was shot in the head.”

Along with rubber bullets and tear gas, multiple reports from various cities and towns, difficult to independently confirm, said that the police have used live ammunition.

On Wednesday, Burmese security forces continued to attack peaceful protesters in defiance of the request for peace from the Association of Southeast Asian Nations, of which Burma is a neighbor.

The United Nations Security Council is expected to hold a closed-door meeting on the situation on Friday, said council diplomats, speaking on condition of anonymity before an official announcement. The UK requested the meeting, they said.

But any kind of coordinated action at the United Nations would be difficult as two permanent members of the UN Security Council, China and Russia, would almost certainly veto it. Some countries have imposed or are considering imposing their own sanctions.

The government fired its ambassador to the United Nations on Saturday night for condemning the coup, or as the military called it, “betraying” the country.

Ambassador Kyaw Moe Tun in New York City said on Friday that he represented the “civilian government elected by the people” of Suu Kyi and supported protests against the coup. He urged other counties to condemn the coup.