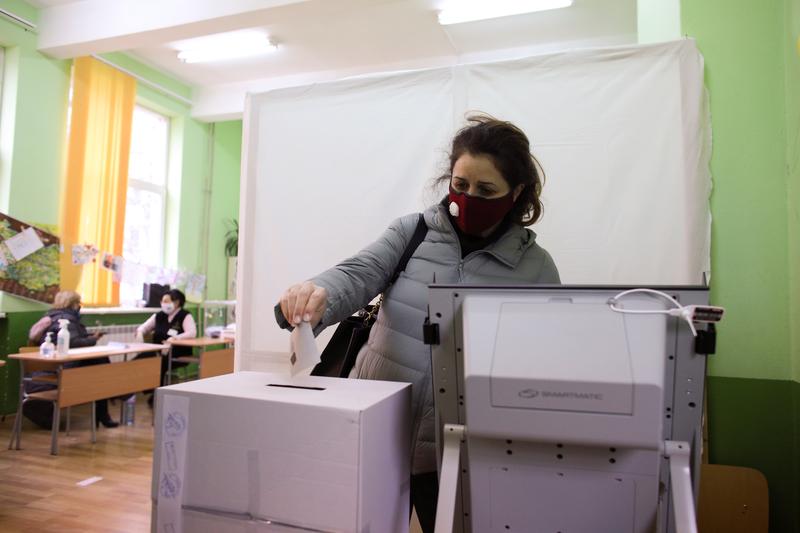 SOFIA (Reuters) – Bulgarians began voting in parliamentary elections on Sunday that will decide whether Prime Minister Boyko Borissov wins a new four-year term despite lingering concerns about corruption in the poorest member state of the European Union. .

Opinion polls suggest that Borissov’s center-right GERB will once again be the largest party, with 28-29% of the vote, but will fall short of a majority and may struggle to build a stable coalition in a more fractured parliament.

That could hamper Bulgaria’s ability to effectively leverage the € 750 billion ($ 884 billion) EU Recovery Fund to help rebuild the bloc’s economy after the coronavirus pandemic.

Borissov, 61, a former firefighter in power almost relentlessly since 2009, has tried to show off his successes in modernizing Bulgaria’s creaky infrastructure during a low-key campaign that took place when COVID-19 hit the country. .

“We show what we have achieved,” Borissov said after casting his vote, thanking his allies in the conservative European People’s Party for their support.

He also thanked the European Commission, the EU executive, for 1.3 million additional injections of the COVID-19 vaccine, which the country will receive in the second quarter.

More than 6.7 million Bulgarians are eligible to vote, but pollsters expect low turnout due to voter concerns about COVID-19 and the slow rollout of the vaccine.

Bulgaria recorded an average of about 4,000 new coronavirus cases a day in March and has the second highest coronavirus-related death rate in the EU after Hungary, according to the online scientific publication Our World in Data.

Although hospitals are full, the government eased some closure restrictions ahead of the vote, allowing restaurants to serve customers outdoors and movie theaters and gyms to run at 30% capacity. The kindergartens will reopen on Monday.

The Borissov government has presided over a 36% increase in the average monthly salary to 1,468 leva ($ 882), kept public debt low and secured entry to the “waiting room” to join the euro currency.

But its inability to tackle endemic corruption and reform the judiciary brought thousands of protesters to the streets for months during 2020.

The protesters accused Borissov of reaching out to local oligarchs and channeling EU aid to companies close to GERB, accusations he denies.

President Rumen Radev, who is a critic of Borissov but has a largely ceremonial role, says Bulgaria needs new faces and ideas.

Socialists in the main opposition campaigned to restore confidence in state institutions and reduce poverty, but have been hampered by internal disputes and are expected to win between 20-22% of the vote.

An anti-elite party led by television host Slavi Trifonov appears poised to finish third with 13%. Trifonov says he opposes any coalition with the main parties, raising the specter of a stagnant parliament if his party performs well.

It is closely followed by the MRF party of Turkish ethnicity.

Democratic Bulgaria and Stand Up! Mafia Out !, fueled by the protests, is also expected to win seats. GERB’s coalition partner, the nationalist VMRO party, is close to the 4% threshold, polls show.

(Correct the sixth paragraph to show that 1.3 million vaccines will arrive in the second quarter, instead of arriving on Friday)