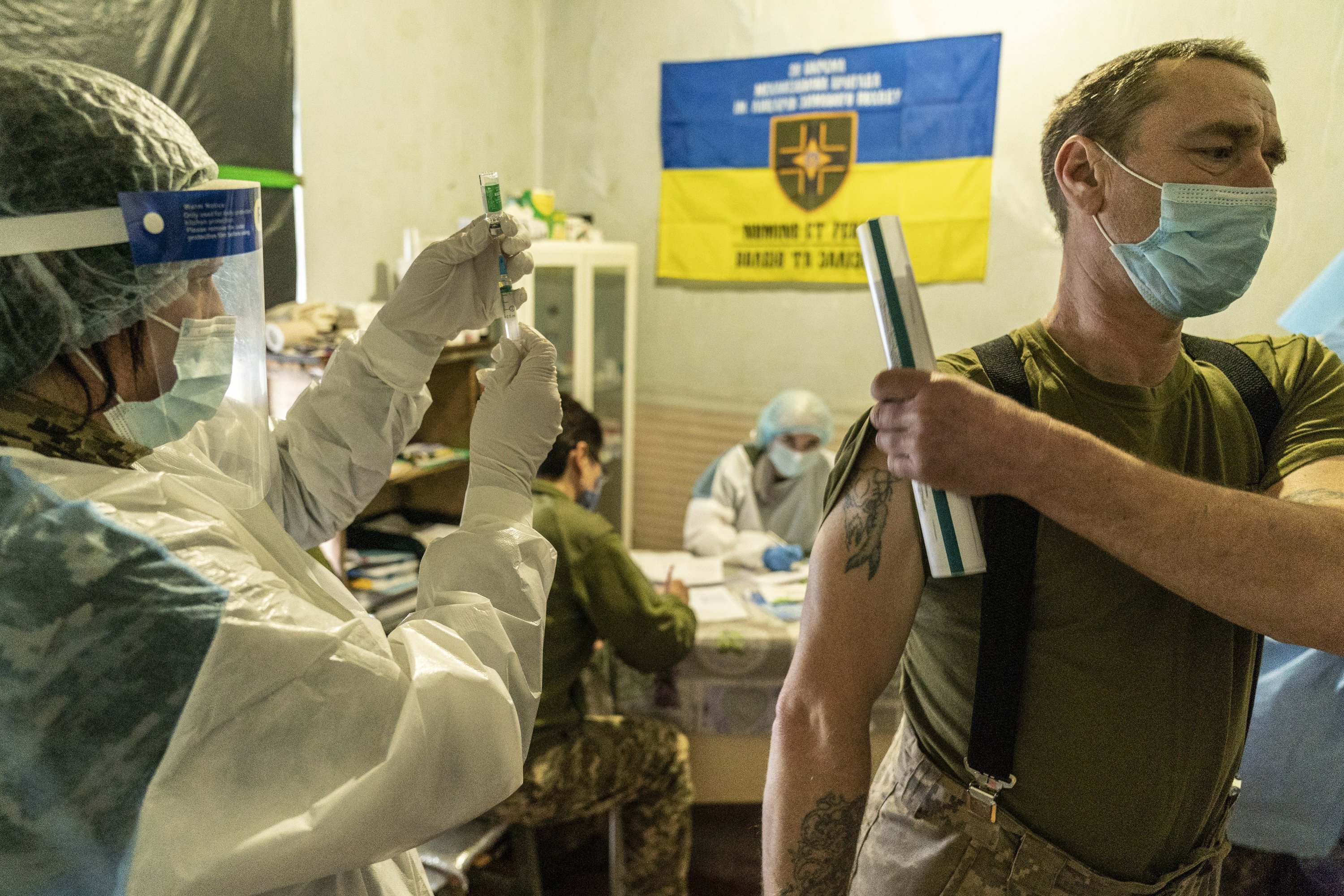 KIEV, Ukraine (AP) – After receiving its first shipment of coronavirus vaccine, Ukraine found itself in a new fight against the pandemic, persuading its largely reluctant people to get vaccinated.

Although infections are increasing dramatically, Ukrainians are increasingly opposed to vaccination: an opinion poll published earlier this month by the International Institute of Sociology in Kiev found that 60% of the country’s population does not want to be vaccinated, compared to 40% the previous month. . The national survey of 1,207 had a margin of error of 2.9 percentage points.

The resistance appears to be rooted in suspicion of vaccines dating back to the Soviet era, amplified by allegations from politicians about poor quality vaccines, corruption scandals and misinformation spread through social media. Even more surprising, reluctance continues to appear even among the highest risk people who administer life-saving drugs to others every day: medical workers.

In the mining town of Selydove, 700 kilometers (420 miles) east of Kiev, only 5% of medical personnel agreed to get vaccinated. Among those who declined was Olena Obyedko, a 26-year-old nurse who works in the intensive care ward of the hospital for COVID-19 patients, where people die every week.

“I decided not to get vaccinated. I doubt the quality of the vaccine. I’m afraid there will be side effects, ”he said.

So few people opted for vaccines that the mobile squad that came to Selydove to administer them ended up getting vaccinated so as not to waste the vaccine.

“Such a low number of vaccinated people is associated with low confidence in the vaccine that has entered Ukraine,” Brigade Chief Olena Marchenko said of the AstraZeneca vaccine that was manufactured in India. “This is due to prejudice and the information that is spread on social networks. People read a lot, they have a negative attitude towards the Indian vaccine ”.

Prominent politicians have fueled that suspicion.

Former President Petro Poroshenko said in parliament this month that he asked doctors in one region why there was resistance to vaccination, and they said, “Because they brought shit. And they brought him in for corruption and incompetence. “

Former Prime Minister Yulia Tymoshenko added to the discontent by demanding that parliament pass a law granting compensation to the government for those facing the side effects of vaccines.

The vaccine corruption scandals had started even before the first doses arrived in the country. Ukraine’s National Anti-Corruption Office reported that it began an investigation into a September deal to buy 1.9 million doses of the Chinese Sinovac vaccine at 504 hryvna ($ 18) per dose. Its Chinese manufacturers have not published full reports on its effectiveness and a study in Brazil said it is only 50% efficient.

“What these attacks lead to are consequences that will affect all Ukrainians,” said Health Minister Maxim Stepanov. “We are talking about an attempt to interrupt the vaccination campaign in Ukraine.”

Ukraine received its first shipment of vaccine – 500,000 doses of AstraZeneca – in late February. However, only about 23,500 people have been vaccinated since then.

In that same period, up to 10,000 new infections have been recorded per day. Overall, the country of 41 million has recorded 1.4 million infections and more than 28,000 deaths.

The health minister says that only about 40% of medical workers treating coronavirus patients have agreed to receive the vaccine.

Speaking in parliament, Oleksandr Kornienko, a prominent member of President Volodymyr Zelenskiy’s Servant of the People faction, said medical facilities were forced to destroy many doses of the vaccine, which can only be stored for a few hours after they are released. open a vial, because the medical professionals who had been prescribed vaccines did not show up.

“Now they are forced to destroy the coveted vaccine, because they don’t give it to people in time,” Kornienko said.

Zelenskiy, who contracted the virus in November, tried to encourage vaccinations by publicly receiving a vaccine.

“The vaccine will allow us to go back to living without restrictions,” Zelensky said. “I think this vaccine is of high quality, it is one of the best in the world.”

However, their action appears to have had little effect.

The country designated 14,000 doses of its first shipment of vaccines for the military, especially those fighting Russian-backed separatists in the east. But so far only 1,030 soldiers have been vaccinated.

In the frontline city of Krasnohorivka, soldiers widely refused to vaccinate.

“I have little faith in a pandemic, I don’t think it’s some kind of serious illness,” said Serhiy Kochuk, a 25-year-old soldier. “I am healthy, but the vaccine can cause disease. Because of this vaccine, you can get sick. “

The director of the Kiev sociology institute, Volodymyr Paniotto, told The Associated Press that a recent decline in the popularity of the Zelenskiy government has contributed to resistance to vaccines.

“The supercritical attitude of Ukrainians towards the authorities was superimposed on the struggle of politicians and the information war, which generated massive mistrust in society,” he said.

Ukrainians have been skeptical of any vaccine since Soviet times. In 2019, the country had the largest measles outbreak in Europe due to widespread refusal to get vaccinated against measles.

“For the past 20 years, Ukraine has been among the European countries most opposed to vaccination as such,” said Vadym Denysenko, an analyst at the Ukrainian Institute for the Future.

The United Nations Development Program says the country is suffering an “infodemic” of misinformation about the vaccine and has called on the government to step up its fight.

“Conspiracy theories, rumors, and malicious misinformation can quickly go viral on social media, especially when there is a low level of public trust in state institutions,” he said.

Mstyslav Chernov in Selydove, Ukraine, and Jim Heintz in Moscow contributed to this story.