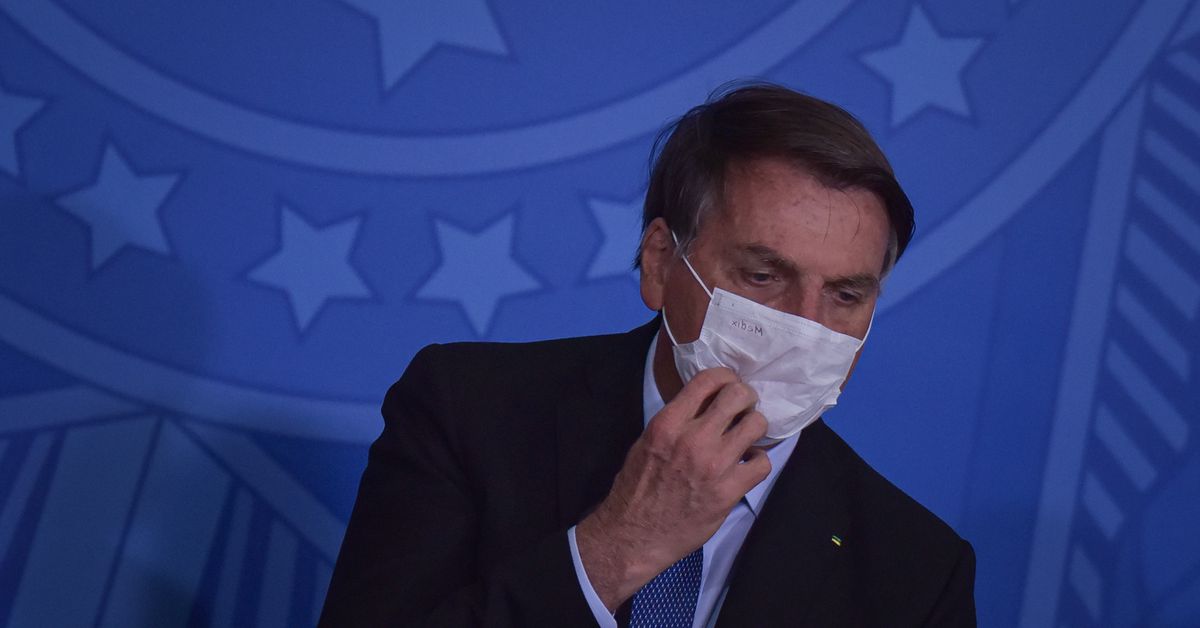 Brazilian President Jair Bolsonaro has tested positive for the coronavirus, after months of downplaying it as nothing more than a “little flu.”

Bolsonaro confirmed his diagnosis to reporters on Tuesday, saying he felt “fine.” The president was reportedly tested on Monday after showing symptoms such as fever and tiredness. He told supporters on Monday that he went to the hospital and that his lungs were “clean.”

Bolsonaro’s announcement comes as Brazil struggles to contain the pandemic. The country has confirmed more than 1.6 million coronavirus cases and has recorded more than 65,000 deaths. It is second only to the United States in the number of confirmed cases and deaths, although those figures are also probably an insufficient count.

“Just look at my face: I’m fine,” says Bolsonaro, taking off his mask in front of journalists after announcing that he just tested positive for coronavirus pic.twitter.com/JIHHcjniPl

Bolsonaro’s critics say his arrogant attitude toward the pandemic has undermined attempts to control the virus and hampered any possibility of a coordinated federal response, worsening the crisis in Brazil.

From the beginning, Bolsonaro dismissed the disease as a “miserable cold” and scoffed at social distancing measures aimed at slowing its spread, proclaiming in late March that “we will all die someday.”

He opposed state governors’ decisions to impose closure measures, attended protests against the closure, met with supporters without wearing a mask and lobbied for companies to reopen despite the growing outbreak. It has supported the use of hydroxychloroquine and chloroquine, the controversial antimalarial drugs, although there is little evidence that they are effective in the treatment of Covid-19. (Bolsonaro has also said that he is now taking hydroxychloroquine.)

Bolsonaro joins a handful of world leaders who have contracted the coronavirus, including British Prime Minister Boris Johnson and Honduran President Juan Orlando Hernández. The 65-year-old Brazilian president underwent at least four tests for the coronavirus, including in March, after members of his inner circle tested positive after a visit with US President Donald Trump in Mar-a- Lake.

If this confirmed positive result changes the way Bolsonaro addresses the pandemic and catastrophe unfolding in Brazil, it is the “$ 1 million question,” Valentina Sader, assistant director of the Adrienne Arsht Center for Latin America at the Atlantic Council, told me. .

“The political outcome of this depends on how well you are going to be with this disease,” Sader said. “So it’s 100 percent related to that.”

Bolsonaro tests positive for the coronavirus. Is anyone surprised?

Bolsonaro has had some coronavirus scares before, but this time, at least, apparently it’s real. He confirmed his diagnosis to reporters on Tuesday after he reportedly had symptoms.

The week before, he had smoothed out a rule requiring people to wear masks in certain settings. And the previous weekend, she attended a July 4 party at the United States Embassy, which didn’t seem to include social distancing or wearing masks. (The US embassy in Brazil said the US ambassador had tested negative for Covid-19, but would be quarantined)

Bolsonaro is now the highest-profile Covid-19 patient in Brazil, and what that means for the country probably largely depends on one’s policy.

“This is a very sharp catalyst for nothing to change,” said Daniel Lansberg-Rodríguez, director for the Latin America region of Greenmantle LLC, a geopolitical advisory firm, and an adjunct professor at the Northwestern Kellogg School of Business, about the Bolsonaro’s diagnosis. “Whatever your opinion of Bolsonaro yesterday, you will feel validated by this news.”

Bolsonaro previously said that he has little to worry about if he contracts the coronavirus, and that his “track record as an athlete” will protect him. “I wouldn’t feel a thing or, in the worst case, it would be like a little flu or a cold,” he said in March.

And if Bolsonaro continues to experience only a mild illness, it would be the best claim for himself and his followers.

Bolsonaro has also said that he is taking hydroxychloroquine, which is touted as a miracle cure, though research results do not confirm this. On Twitter, his son Eduardo promoted Bolsonaro’s use of the drug as a reason why he had come out of this, because “chloroquine is very effective at the beginning of the disease.” (Again, there is no evidence to support this.)

On the other hand, Bolsonaro’s detractors can find their own source of claim in Bolsonaro’s diagnosis. The president adopted a stance contrary to science: exits without a mask, rejection of social distancing, and he would not know it, he received the coronavirus. Bolsonaro becomes a symbol of his own failed response to the pandemic.

His critics will use it to say, “‘Look, even this guy, who dismissed it as nothing more than a’ little flu, ‘has caught it,” Anthony Pereira, a professor of Brazilian studies at King’s College London, told me. “And you know, he may have gotten it because of his actions in terms of going out and mixing with unmasked people. I think it will only reinforce his view that Brazil appears to be competing to be one of the worst countries in terms of the way it handles the coronavirus. “

At the same time, experts told me that there is a certain skepticism surrounding Bolsonaro’s announcement. The coronavirus has devastated the country. Thousands continue to die; hospitals are at their breaking points. The closings, while not applied uniformly, have hurt the economy, although some cities are reopening, even when experts warn that the worst is not yet over. Bolsonaro also faces political scandals, including investigations of his children.

Now that Bolsonaro has the coronavirus, that headline can replace all the others.

“On the one hand, it is going to change all the issues of the last week: that we do not have a health minister, that his children are really involved in some criminal things, and that Brazil is not doing well against the epidemic and also economically,” Fernando Brancoli, an associate professor at the Federal University of Rio de Janeiro and an associate researcher at the Orfalea Center at the University of California Santa Barbara, told me. “And on the other hand, he is really going to use this to maintain his initial speech about the pandemic that it’s not a big problem, it’s going to be fine, he’s taking chloroquine. ”

These competing narratives speak to the level of mistrust and polarization in Brazil at the moment, which Bolsonaro has helped foster. It attacks the media, and virtually all criticism is “fake news.” Also spread misinformation, think chloroquine, to achieve your political ends. His well-documented lies also mean that it is difficult for his detractors to trust what Bolsonaro says or his motives.

As Daniel Lansberg-Rodríguez said, the Bolsonaro news is only solidifying the prejudices that people had yesterday. “Either this is a painfully obvious attempt to try to make a difficult situation for him politically turn into a stronger position,” he said, “or it is, ‘Look how hard our man is. He has the virus that everyone gets. they complain, and he really doesn’t care. He’s doing it right. ‘”

When it comes to Bolsonaro, as Sader said, it’s still early enough to know if he could change tactics or double down. Sader said he believes it gives the opposition the opportunity to push for changes, such as more restrictive mask measures, or to appoint an experienced health minister to help manage the crisis. (Bolsonaro fired one in April who advocated closures, and the other resigned about a month later, when Bolsonaro was promoting chloroquine.)

It seems less likely, at this point, that Bolsonaro will make a radical change in the emergence of the coronavirus. It would be an admission that he fully handled the crisis, and that he only saw it dangerous and deadly when he contracted the virus.

Every day at Vox, we aim to answer your most important questions and provide you, and our audience worldwide, with information that has the power to save lives. Our mission has never been more vital than it is right now: empowering you through understanding. Vox’s work is reaching more people than ever, but our distinctive brand of explanatory journalism requires resources, particularly during a pandemic and economic downturn. Your financial contribution will not constitute a donation, but will allow our staff to continue offering free articles, videos and podcasts with the quality and volume required at this time. Please consider making a contribution to Vox today.