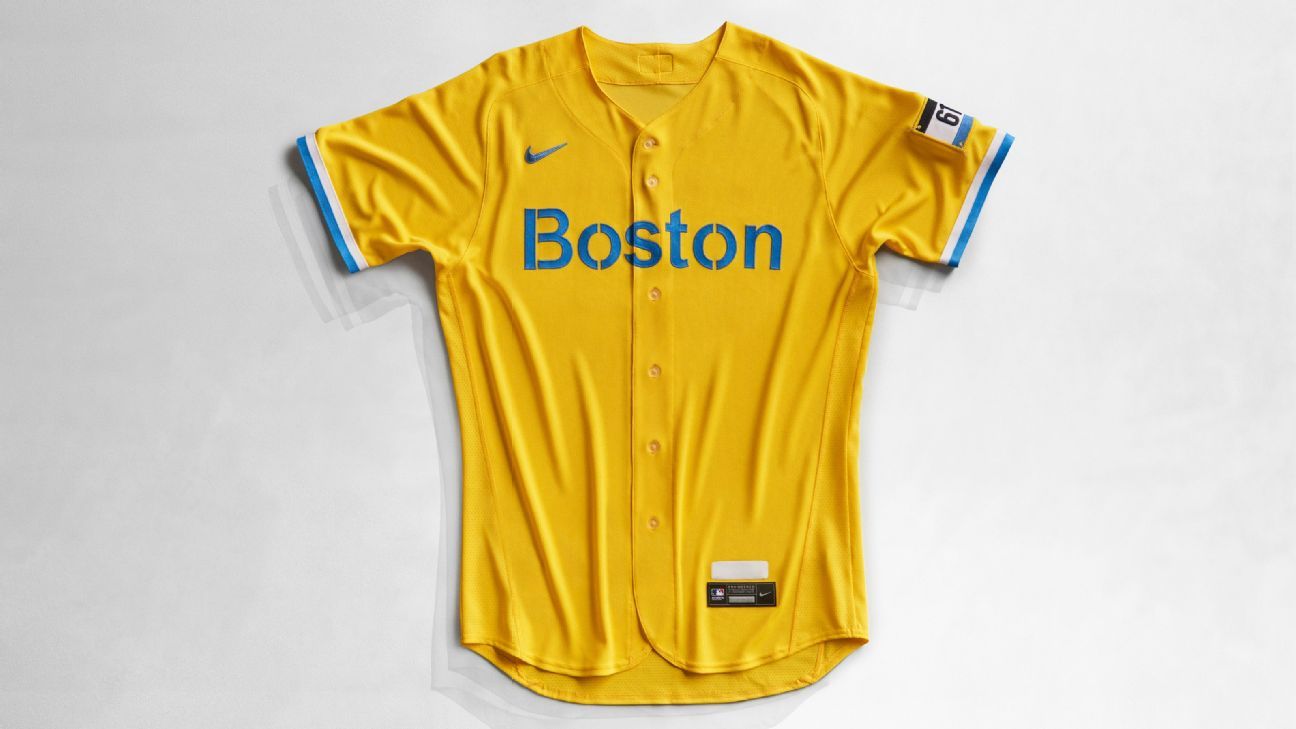 The Boston Red Sox, known for their traditional white uniforms with red lettering and the iconic “B”, are unveiling their first red-free jersey.

As part of Major League Baseball’s first major jersey collaboration with Nike, which became the supplier of sports uniforms in 2019, the Red Sox unveiled the yellow and pale blue uniforms on Tuesday.

Inspired by the Patriot Day holiday and the Boston Marathon, the jerseys feature a marathon patch with the number 617, the Fenway Park area code, on the left sleeve.

“It was in the center and that’s why we made this deal. You take two iconic brands and put them together and you have one and one makes three,” said MLB chief revenue officer Noah Garden. “This is what we expected and this is what we wanted. This is the plan we always set ourselves.”

Each MLB team is expected to have a City Connect Series jersey by the end of the 2023 season, and teams will work individually with Nike to create a uniform that is connected to each city’s personality and community.

Since taking over as a uniform supplier to the NFL and NBA, Nike has driven similarly radical uniform design changes in baseball, with City Edition uniforms in the NFL and NBA creating a wide variety of styles. Nike introduced Boston to 10 different concepts in early 2019, with Red Sox marketing director Adam Grossman and executive vice president Troup Parkinson landing on the Patriot Day concept.

Grossman said that when the Red Sox learned of the sport’s association with Nike two years ago, they reached out to say they wanted to push the boundaries when it came to their uniform design.

“We wanted to be at the front of the line. We told them that we would love to collaborate in whatever way we see fit,” Grossman said. “That was two years ago, and at that point, they said they were going to do the City Connect program, that if we’re going to do this, we do it all, and even though we are a traditional historical franchise, we want to do something completely different.

“We want to go further and be bold in this.”

While Grossman was initially hesitant to introduce a Red Sox jersey without the team name color, he felt the connection to Patriots Day and the marathon presented a unique narrative that justified the decision to go ahead with a bold design. The Red Sox will wear the yellow and blue uniform for the first time on April 17 and 18 against the White Sox before wearing their traditional Patriot Day uniform with the Boston Strong patch first introduced after the Boston Marathon bombings. in 2013.

“This was the one we felt all along that this was the one, but it was also like, ‘This is a Red Sox jersey that doesn’t have red or anything on it,'” Grossman said. “We wondered if we could do this and we felt like it was time to do it. There’s never a better time than now. It drives us as an organization, it drives baseball and I think the way we’re pitching it, we think about it. It would allow us to enter different neighborhoods in Boston that are driving culture in Boston, because that’s part of what this reflects. “

Nike senior designer Wil Green said Nike was inspired by the marathon finish line while designing the uniforms, which feature a template-like font on the front of the jersey.

Grossman acknowledged that many baseball traditionalists may not like the great departure from traditional team jerseys, but they are not intended for “traditionalists” either.

“We understand that for traditionalists, this may not work for them and we agree with that,” Grossman said. “We get it. This isn’t meant to replace our crisp whites. It’s not about that, but it’s about connecting and getting other people to look at us differently, especially younger and more diverse crowds. We embrace it, and it matters. acknowledge and celebrate that, and that’s what this represents. “

“When you see this convergence and for us and the sport, we want to be more part of the lifestyle,” Grossman said. “We do it as a game, but getting out of the white lines of the diamond, that merchandising and hats are part of everyday culture is essential to grow the game as well as the game itself.”

With baseball entering the third season of a 10-year contract with Nike as a uniform supplier, Grossman hopes that the City Connect series will be the beginning of a series of design changes to the baseball uniform.

“We’re going to see more experimentation not just with color combinations, but I think as we get into this relationship as an industry, the creativity around the design itself will be something that will be interesting to see,” Grossman said.