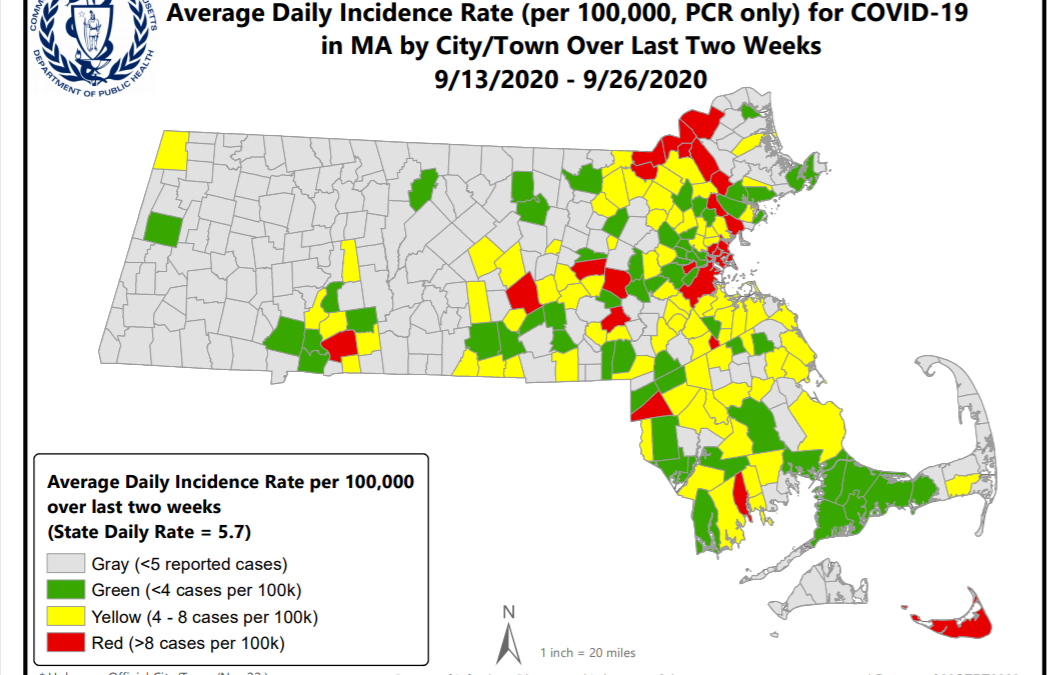 The latest weekly data on Massachusetts’ coronovirus epidemic, including an updated community-level risk assessment map, considers 23 communities most at risk for transmitting COVID-19 from the previous week to eight.

Amidst these changes, Boston is moving into the red zone for the first time since the state has started tracking city-by-city figures, something that Mayor Marty Walsh has been doing since last week.

Data from the Department of Public Health include the breakdown of the total number of coronovirus cases in each Massachusetts city and town, Plus new map and more data.

This map shows the number of cases found in each community of Massachusetts on average each day in the past two weeks. More than 8 cases per 100,000 turn into high risk and red shading, between 4 and 8 cases per 100,000 have a moderate risk and any lower risk is lower.

The city has 23 cities and cities red compared to last week’s map, totaling eight, which included data from September 6–19.

Last week, Boston was classified as high risk at just 0.1 cases per 100,000 cases, following a warning from Walsh that the city was headed for a high-risk situation. But this week’s report put it at 8.5 per 100,000 residents.

Walsh said Wednesday that Boston would not enter Phase 2 of Phase 3 of the state’s reopening plan on Monday, as it was expected to be declared red in the report, which is released on Wednesday evening.

“Being in the red category, we need to be taken very seriously in Boston,” Walsh said in his Wednesday coronovirus briefing. “This is not unexpected and is based on just one data point. We have made incredible progress over the last few months and we still have the ability to continue this progress.”

Although the state’s guidance for shifting schooling is for communities in red, Boston is using a 4% positivity rate as a benchmark for changing times. Boston Public Schools is set to move into a hybrid of in-person and distance learning on Thursday and district officials did not announce a change in that plan Wednesday night, when the recent percentage positivity was 0.56%.

A district statement said officials are “monitoring public health guidance and we will only continue with the scheduled phase of the hybrid model if it is safe to do so.”

A representative from the Massachusetts Department of Public Health noted on Wednesday night that Boston is uniquely dense among Massachusetts communities, with the state’s largest population and high concentration of colleges and universities and other jobs that bring people together . Higher levels of testing in institutions of higher education have contributed to a higher number of positive cases.

Massachusetts has changed over time how this coronavirus virus is measured.

Color-coded city-by-city data was introduced in August, and the Baker administration announced that the state would focus its strongest COVID-mitigation efforts on cities in the red category. Communities can only move to Phase 2 of Phase 3 of Massachusetts, announced Tuesday, if they are not consistently in the red.

Previously, positive COVID test rates before 14 days were the standard for measuring hot spots. The weekly report of the Department of Public Health still includes information on how many tests are being conducted locally and how many cases have been reported locally, along with other metrics.

However, some small towns in Massachusetts have taken issue with being classified on a per-capita basis.

New Mass. Communities designated as state high risk for coronovirus are reacting to the designation.

They say that, when a city has only a few thousand people, its infestation in only one house can send it in red, which is determined by 8 cases of COVID-19 per 100,000 inhabitants.

Asked on Tuesday why he prefers using per capita cases rather than percentage positivity, Gov. Charlie Baker said on Tuesday that the latter does not take into account that some people test repeatedly.

“There are a lot of repeat testers in our data, many of whom are repeating work-related reasons,” Baker said.