‘Blindness’ Review: Hear The Sound Of The Theater Again 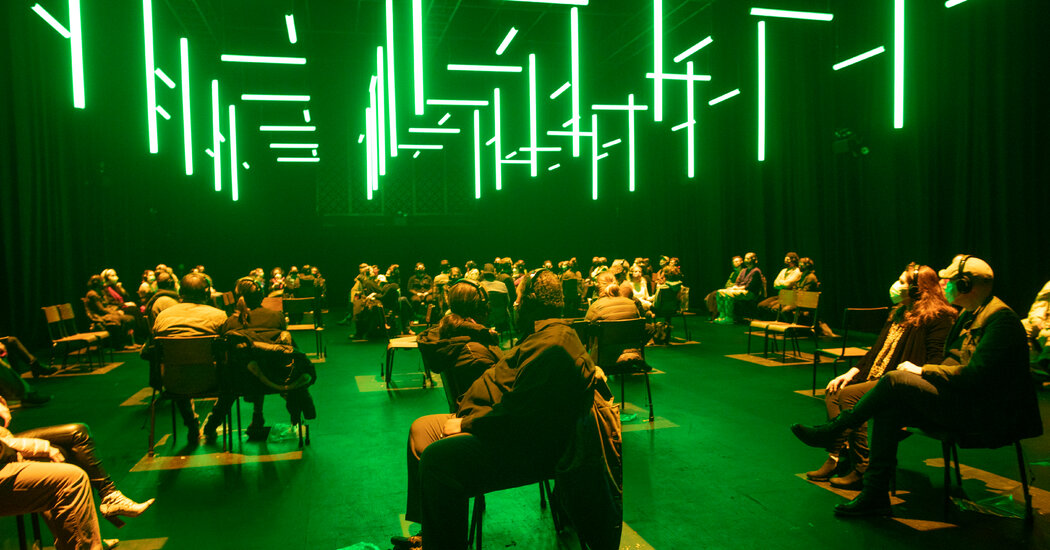 As Stevenson leans toward acting, we become stand-ins for the wife’s confidants. Thanks to Ben and Max Ringham’s surround sound design, the audio brings the actress eerily close – you can almost feel her breath in your ear as she whispers what she sees and continues its way around you as sound bounces from earphone to earphone. other. I reflexively flinched when I heard the buzzing of flies, which seemed to hover around the outer curl of my ear.

As the character unravels, so does Stevenson, his voice cracking with despair. In one scene, when a beastly group of blind men demands to be offered women in exchange for food, their hoarse cry of “Monsters!” rises to a bone-chilling screech.

Stephens, winner of the Tony Award for his stage adaptation of “The Curious Incident of the Dog in the Night,” makes bold and sensible decisions here, especially given the limitations of creating a socially detached theater. Yet this “Blindness” feels remarkably stripped of the brightest elements of Saramago’s novel. The lyrical philosophizing about human nature is lost in translation, cut off for Stevenson’s more direct narrative. Other voices, already muted in the book, disappear completely. Likewise, the indispensable comment on how institutions defraud their people is left behind.

As soon as Stevenson utters the word “epidemic”, with a strong British click on that “C”, the shadow of Covid-19 looms over the 70-minute play. But the coronavirus didn’t really come to mind much while I was there. This story of the epidemic felt too individual, too rushed, too isolated for one character, too lax with the larger social narrative, to fully translate what we’ve experienced in the past year.

The last minutes of the production are abrupt, skipping the last act of the short story. It’s as if the show, produced in a world battling a real pandemic, still doesn’t understand how the story of its fictional epidemic should end.

Instead of the ending of Saramago, Stephens looks for an earlier scene involving three women bathing in the rain. The change admirably centers the resilience of women in the story. But ultimately, it feels like an empty gesture, given the ways the adaptation is limited to character development other than the doctor’s wife.

For someone like me, who had just read the novel, “Blindness” is more of a sensory experience than a richly theatrical evocation; More than a fable about hope and humanity, it plays as a thrill to long-deprived ears and eyes.