Australia’s Great Barrier Reef is one of the planet’s most biodiverse and intriguing areas in the world, but it’s also relatively inaccessible. It shouldn’t surprise us then that we’re still discovering more and more about it. 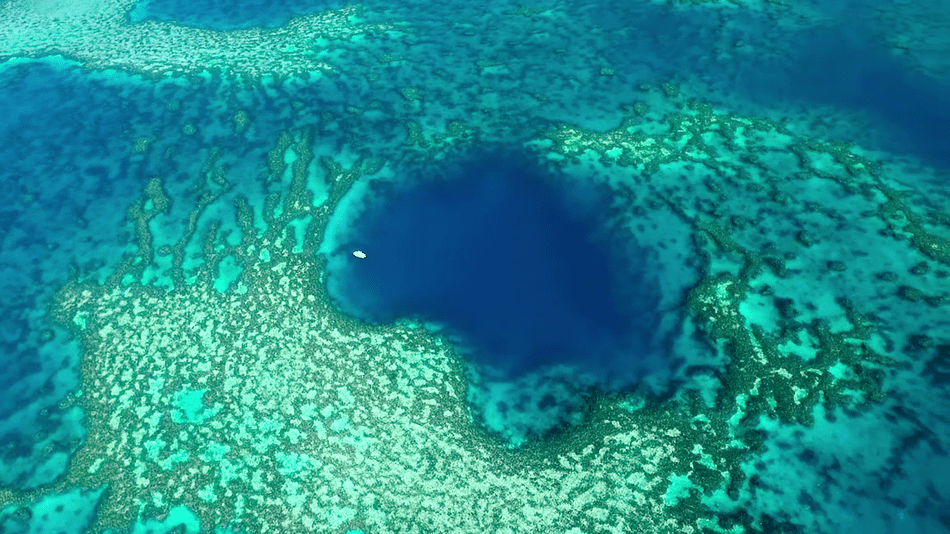 Johnny Gaskell, an Australian who loves marine wildlife and underwater photography, was looking around Google Maps when he discovered something unexpected: a big blue hole. Gaskell, who also works as a researcher for Sharks and Rays Australia, took a boat to the site and explored the hole. Although it is much further out than he usually goes, the trip was well worth it.

“What we found inside was hard to believe, considering five months ago a Category 4 cyclone went straight over the top of it,” Gaskell told Mashable. “At around 15 to 20 metres (16 to 21 yards) deep, there were huge Birdsnest Corals (Seriatopora) and super elongated Staghorn Corals (Acropora), both of which were among the biggest and most delicate colonies I’ve ever seen,” Gaskell said.

This hole, while nowhere near as large as other giants, still measures a respectable 50 to 65 feet deep (15-20 meters), and as Gaskell notes, it hosts some large and healthy coral colonies — something unexpected in the Great Barrier Reef, which is slowly being killed off, in large part due to anthropic pressure.

Research is underway at the blue hole.

“Yesterday’s Blue Hole mission in the Great Barrier Reef,” Gaskell wrote on his Instagram. “This Blue Hole has previously been described and documented by geologists who suggested it could be even older than the famous Great Blue Hole, in Belize. Its location is in one of the least explored parts Great Barrier Reef, over 200km from Daydream Island. To get there we had to travel overnight for 10 hours and time the tides perfectly… Was well worth it!”

Gaskell has located two other blue holes, roughly 200 kilometers away from the first one. Logistical preparations are currently being made to explore the other ones. However, their location is still kept secret for conservation fears. Corals are greatly suffering from bleaching caused by rising temperatures, and tourism can add even more stress with potentially devastating consequences. Half of the reef has vanished in the past 27 years, and it shows no sign of slowing down — this is what makes the healthy corals in the hole even more surprising.

Blue holes are basically marine sinkholes — natural depressions (or holes) in the surface of the Earth’s surface, (usually) caused by karst processes. Karst processes occur when the bedrocks are soluble – in other words, in 99% of all cases, in carbonate rocks (like limestone or dolomite) or evaporitic rocks (like gypsum or anhydrite). Marine sinkholes are also called blue holes. Blue holes typically contain tidally-influenced water of fresh, marine, or mixed chemistry, and can differ greatly from the surrounding environment.