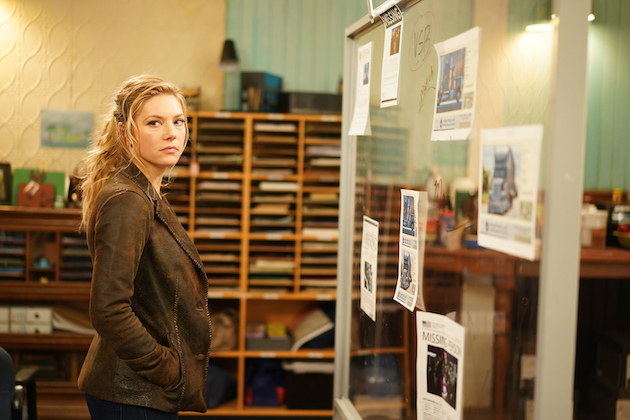 Big skyMarilyn Legarski may want Is planning a funeral for her husband Rick … because, as we learn at the end of the series’ winter premiere, she is not dead!

As viewers will recall, Cassie DeWell fired a bullet into the Montana State trooper’s forehead at the end of the Fall finale, right after she was planning to drive to Canada when she found him with three women. And that’s where Tuesday’s episode arose in the basement of All In Bar with the bleeding of the leggers. He is rushed to the hospital, where he flatlines but is still revived.

Cassie is incredibly moved by what she has done; Throughout the episode, she (understandably) hovers over the edge of a panic attack. When Jenny arrives at the scene, emergency personnel are watching Jerry, Grace and Danielle, she is full of hope about Cody. But it quickly collapsed when Sheriff Toub’s officers excavated Cody’s truck, which contained the body of the dead PI inside. Jenny sighs and falls to her knees in grief, while Cassie watches quietly and cries. (Side note: Even in her deep loss, this woman’s commitment to a wide braid is commendable. At one point in the hour, while she’s keeping her eyes out at home, Jenny is still shaking a plaque causing Elsa Will envy.)

At home, Ronald and his mother are freaking out. Police are going to search Legarski’s house to try to connect him to sex-trafficking, and if they find the hidden room where Rick keeps all his records, Ronald is toast. What’s more: Thanks to the recovered victims, police know that the other hijacker is a long haul truck, who does a custom paint job on his vehicle. So Ronald removes the cab of his truck and messes with the license plate, then devises a plan to break into the Legarski home to erase anything to tie him to the crime. (There is still a huge part about Grace, Jerry and Danielle being able to identify her, but one at a time, mother!)

Jenny and her son, Justin, provide a funeral and memorial service for Cody; The subsequent reception includes some heated moments between the widow and Cassie, including when Cassie steps onstage to sing Neil Young’s “Harvest” – Cody’s favorite song – after a choking chore Jenny can’t make it is. Later, the two women find themselves back in the office. “I never thought it would be something that would help me get through it,” Jenny tells her, and the relationship moment prompts Cassie to offer Jenny Cody’s place in private-investigative practice. Jenny scoffs, but eventually agrees – until the Leggerski case is put to bed.

Elsewhere, Jerry is walking home when a man wearing a baseball cap calls out his name and starts following him. Turns out, it’s just a guy he knows named Jimmy who “wanted to make sure you were okay.” The dynamic between them is a bit ambiguous – it seems she likes him, but she tells him the days she can “talk” to him. Still, she feels that she might really like his anxiety. In his place, however, on the door is a note reading “You don’t learn”, which Ronald often told his detainees.

Unknowingly known to everyone in the hospital, Rick’s fingers twitch, his heart rate starts to monitor rapidly, and then he opens one eye!

Now it’s your turn. What did you think of the episode? Sound off in the comments!