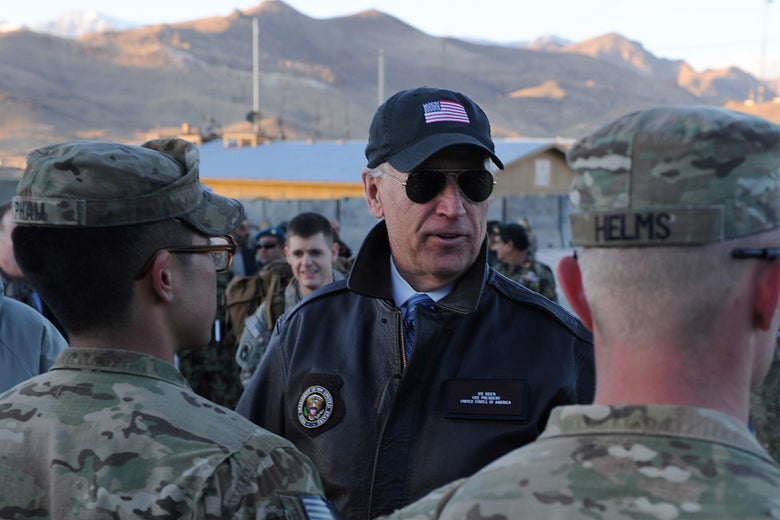 President Biden faces a dilemma that he would rather not face. At some point in the next few months, he will have to send more troops to Afghanistan or withdraw entirely. There is hardly any other real option.

The United States currently has 2,500 troops in Afghanistan, the lowest number since the war began 20 years ago. An agreement that President Trump signed with the Taliban requires all US troops to leave the country by May 1. In turn, the Taliban vowed to disassociate itself from terrorist groups such as al-Qaida and refrain from targeting civilians. They have not met either of the two conditions.

So should Biden stay after May 1 or leave anyway? The problem goes beyond the numbers. The president and his aides are conducting a policy review, and the review should raise a basic question: What do we want to achieve in Afghanistan after all this time? Is that goal feasible? If not, should we cut our losses and go home?

Currently, American troops are primarily involved in counterterrorism against al-Qaida and, to some extent, against ISIS. In all of the past year, only 10 Americans died in Afghanistan, only four of them while fighting. But if American troops are still in the country after May 1, the Taliban will force them to fight, and for that, the United States will need more than 2,500 soldiers. And if they are attacked by the Taliban, they won’t be able to do much against al-Qaida either. Reinforcements would be needed and more Americans would die, or the mission would be doomed.

To complicate matters further, the United States is not the only country whose commitment is at stake. Other NATO countries have around 8,000 soldiers in Afghanistan. They are unlikely to stay if the Americans withdraw. And if Biden stays, they’ll still want to know the plan.

In his long career, Biden has witnessed dire troop withdrawals and unsuccessful escalations. He was a first-year senator during the eerie show of American helicopters leaving the embassy in Saigon, leaving many loyal Vietnamese behind. And he was vice president when Barack Obama, in his first year as president, decided to send 30,000 more troops to Afghanistan, bringing the total to nearly 100,000, and adopt a new counterinsurgency strategy, also known as “nation building.”

Biden was the only National Security Council official to object to that troop increase, arguing instead to deploy just 10,000 additional troops and use them strictly to fight al Qaeda terrorists and train the Afghan army. He argued that nation-building would not work, given the corruption of the Afghan government, and he was right. Obama came to the same conclusion after 18 months of trying, withdrew most of his troops and adopted Biden’s more limited objectives. When he left office, Obama kept 8,000 troops in Afghanistan, not so much to help reform the country as to use it as a base to pressure al Qaeda on both sides of the Afghan-Pakistani border.

Trump was inclined to pull out all the troops, but his advisers, especially Defense Secretary Jim Mattis and National Security Advisor HR McMaster, convinced him otherwise, selling him on a “new strategy” that would inspire “victory.” Actually, it was just a slightly improved version of the old strategy and it didn’t get us any closer to defining “victory”, much less achieving it. So, after hiring a more docile group of advisers, Trump went back to his original plan. He hired a skilled former ambassador and Afghan native, Zalmay Khalilzad, to lead the peace talks with the Taliban (against the resistance of the Afghan government). They made a deal. May 1 was the withdrawal date for US troops. But, as noted above, the Taliban didn’t fulfill their end of the bargain, and now Biden is about to fail our end either.

Biden’s middle ground approach of a decade ago won’t work now if the Afghan government is falling and the Taliban are fighting US forces. So again, should Biden dive further or get out? His previous positions, as senator and vice president, make him less willing to do either.

There are some questions that no interagency group has ever asked seriously, but are worth asking now. First, does it matter if there are American troops in Afghanistan? The standard answer is that if we leave, Al Qaeda will come roaring back and once again use it as a stage to attack the United States, as it did on 9/11. But one thing we’ve learned from the various terrorist plots of the last decade is that if the bad guys want to plan attacks against the United States and its allies, they don’t need a training base in Afghanistan to do so.

Another answer, the one Obama invoked to justify keeping 8,000 soldiers in the country, is that it is worth having a military base in the area, if only to monitor Pakistan, a turbulent country that has nuclear weapons, and to ensure to India, which has some presence in Afghanistan as a way of enveloping Pakistan, of our support. This is the most persuasive argument to stay, even a little bit, (the humanitarian argument to prevent the oppressive rule of the Taliban, especially against women, is another) and if it is impossible to stay a little, we may need to expand our presence a little. A few years ago, there might have been a way to form an alliance with other powers with converging interests in the region – China, Russia, possibly Iran – but tensions with all three make this a fantasy now.

Another way out, the only way to avoid the otherwise inescapable dilemma, is to reach an agreement with the Taliban and the Afghan government to extend the May 1 deadline and keep talking. The Taliban may not agree with this; They think they have us on the run, and in a way they do, so why give us a break? Khalilzad, who remains America’s emissary, may have to find a smart solution to extend this deadlock. I don’t know what this would be; Hope you have some ideas. Biden may have no choice but to urge you on and give you enormous leeway, whatever comes to mind.

Are you kicking the can down the road like the old saw says? Yes, but that’s better than the alternatives.

The central problem is the one the vice president saw in 2009: the corruption of the Afghan government. Senior US military officials saw that back then. At Senate hearings in September of that year, a few months before Obama decided to send more troops, Admiral Mike Mullen, chairman of the Joint Chiefs of Staff, had an interesting exchange with Senator Lindsey Graham. The Taliban were gaining ground, and Graham wanted to know why. The problem, Mullen said, “is clearly the lack of legitimacy of the [Afghan] Government.”

Graham pushed the point. “Could we send a million troops and that would not restore legitimacy in the government?” I ask.

Mullen replied, “That is correct.” A few minutes later, under questioning by Senator Susan Collins, Mullen re-emphasized the point. To defeat the Taliban, he said, “the Afghan government must have a certain legitimacy in the eyes of the people. The central problem is corruption … That threat is as significant as the Taliban. “

Nonetheless, Mullen, Graham, Collins urged Obama, and Obama decided, to send more troops. Mullen, General David Petraeus, and other American officials also said around this time that there was no way to win the war militarily; it would end only through a political settlement. And yet they all urged to wait until the United States and NATO win some big battles, so that we could go to the negotiating table with influence, to get the best possible deal. But we never won some major battles and the Afghan government remained corrupt, lacking legitimacy.

And so President Biden, who saw the situation more clearly in 2009 and supported a policy consistent with that vision, is probably caught in the same dilemma as his predecessors, although I suppose he will not fall into the trap of escalation, he will not send none plus troops. He will simply command his team to find the best, or least bad, way to get ahead.