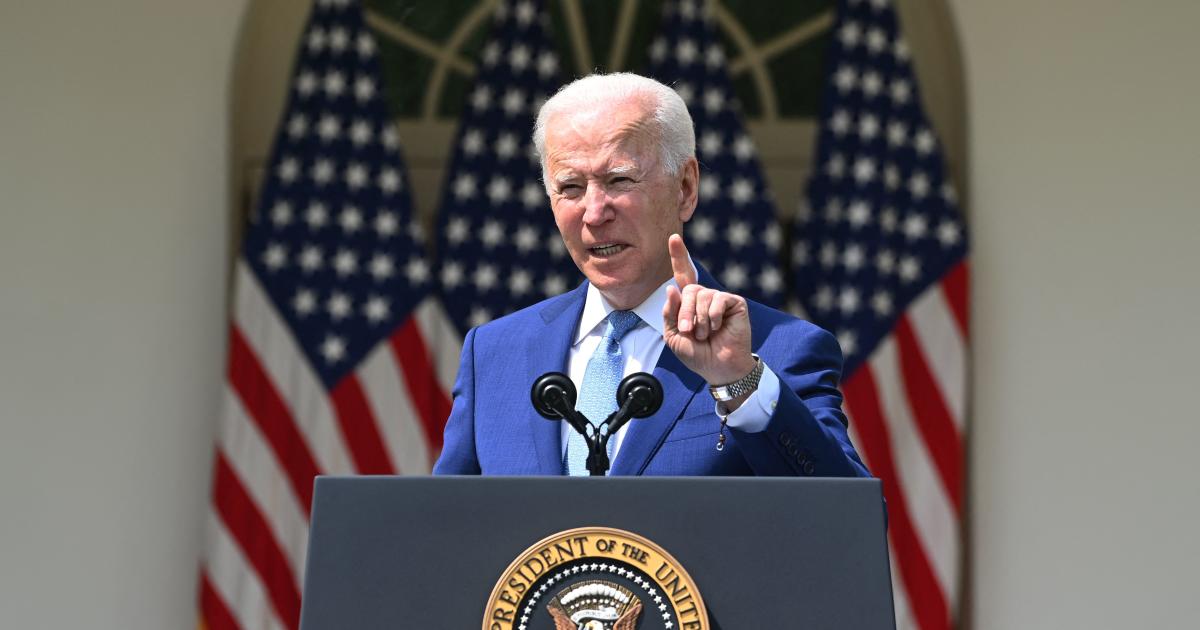 “Gun violence in this country is an epidemic and an international disgrace,” Biden said in his remarks when announcing the actions. He called the high rates of gun violence a “stain on the character of our nation.”

He rejected the arguments that these executive actions would violate the right to bear arms. Changes include revising federal policy around ghost weapons (hand-made or self-assembled firearms that do not include serial numbers) and the use of stabilizer mounts on pistols, a modification that turns the weapon into a rifle. short-barreled.

“Nothing that I am going to recommend affects the Second Amendment in any way,” the president said. Biden said he wants the ghost gun kits “to be treated like firearms” and for key parts to be labeled with serial numbers. He also said he wants pistols modified to be more dangerous subject to the National Firearms Law, which means that owners would have to register and pay a fee for modifications.

The president urged the Senate to approve bills passed in the House to expand background checks. He also asked Congress to reauthorize the Violence Against Women Act, which would close the so-called “boyfriend loophole” to prevent dating partners and stalkers convicted of domestic violence or abuse from buying and possessing firearms.

“Whether Congress acts or not, I will use every resource at my disposal as President of the United States to protect Americans from gun violence,” Biden said.

The president also asked Congress to pass a ban on assault weapons. He helped push a ban in Congress as a senator in 1994, but it expired in 2004. However, a majority of Republicans oppose the measures mentioned by the president, meaning they are unlikely to pass in the Senate. Most of the legislation requires 60 votes to advance in the Senate, and Democrats have a 50-seat majority.

But Biden insists there are “common ground” between Republicans and Democrats, noting that gun control measures are overwhelmingly popular with the American people.

“I know it is painful and frustrating that we have not made the progress that we hoped for,” Biden said. “No matter how long it takes, we are going to approve them. We are not going to give up.”

On Thursday, Biden also nominated David Chipman, a former special agent for the Bureau of Alcohol, Tobacco, Firearms and Explosives (ATF), to head the agency. Chipman, a widely cited expert on gun violence, has in recent years served as the policy director for Giffords, the gun control organization founded by former Rep. Gabrielle Giffords, who was injured in an assassination attempt in 2011.

If confirmed, Chipman would be the agency’s first permanent director in more than six years. Given the tense nature of gun policy, only one ATF director has been confirmed by the United States Senate in the past 15 years, leaving the agency primarily led by a number of acting chiefs.

The president formally announced the election Thursday when he unveiled other steps he is taking through executive action to address gun violence. He was joined by Attorney General Merrick Garland, whose Justice Department will be tasked with taking some of the most aggressive action on gun policy in more than a decade.

Gun control advocates are pushing the president to classify ghost guns as traditional firearms, a move that would require anyone who purchases them to undergo a federal background check. On Thursday, Biden gave the Justice Department 30 days to issue potential changes to federal rules “to help stop the proliferation” of weapons, according to the White House.

Given the handcrafted nature of weapons, ghost weapons often cannot be traced by law enforcement because serial numbers are not required.

The Justice Department also has 60 days to issue a proposed rule on stabilizing braces. Attaching such a clamp to a pistol makes the firearm more stable and essentially transforms it into a short-barreled rifle subject to the regulation of federal law. The White House noted that the alleged shooter in the March supermarket shooting in Boulder, Colorado, appears to have used a clamp-on pistol.

The Justice Department was also asked to draft model legislation to enact “red flag” laws at the state level. For years, lawmakers from both parties have been pushing for federal and state legislation that temporarily prohibits people facing mental anguish or other personal crises from accessing firearms if the police or a judge determines that they pose a danger to themselves. or for others.

“I have no illusions about how difficult it is to solve the problems of gun violence, and I know that the Justice Department alone cannot solve the problem,” Garland said in brief comments. “But there is work to be done for the department, and we intend to do it.”

To curb the surge in homicides across the country, the Biden administration is also asking five federal agencies to tailor more than two dozen government programs to help push community violence intervention programs across the country. The White House noted that the president’s American Employment Plan proposes spending $ 5 billion over eight years to support state and municipal violence intervention programs.

John Feinblatt, president of Everytown for Gun Safety, said in a statement that the measures “will begin to address the epidemic of gun violence that has been unleashed during the pandemic and will begin to fulfill President Biden’s promise to be president of gun safety. stronger. in History. ” He later added that the decision to target ghost weapons and “treat them like the deadly weapons that they are will undoubtedly save countless lives, as will the critical funding provided to groups that focus on gun violence in the city. “.

Kris Brown, president of the gun control advocacy organization Brady, said in a statement that Biden’s actions “will have an immediate impact.”

“President Biden’s actions are historic and will have an immediate impact. These are tangible and powerful policies that will save lives,” Brown said.

Organizations pushing for tougher gun laws and Democratic lawmakers have been pushing for years for the federal government to reclassify ghost guns and force buyers to undergo background checks.

“Ghost guns are weapons too. And it’s time to close the gap,” said Democratic Congressman Adriano Espaillat, who has pushed for legislation to regulate ghost weapons. tweeted on wednesday.

Meanwhile, the NRA immediately rejected the plans. The organization tweeted Wednesday night that the actions were “extreme” and wrote “the NRA is ready to fight.”

Meanwhile, Republican Sen. Pat Toomey, who co-sponsored background check legislation that did not pass Congress in 2013, said in a statement that he and his staff are “reviewing” Biden’s actions.

“I appreciate President Biden’s expressed willingness to work with Republicans and Democrats to achieve this goal. If done in a way that respects the rights of law-abiding citizens, I believe there is an opportunity to strengthen our verification system of background so that we are better able to keep guns away from those who have no legal rights to them, “said Toomey.

Growing in popularity but difficult to track overall given the lack of a serial number, ghost weapons have been used in multiple shooting-related crimes in recent years.

The Biden administration has been reluctant to publicly discuss gun control amid its initial focus on the COVID-19 pandemic and related economic downturn. During his first formal press conference last month, the president noted that he would not rush to address the issue despite recent mass shootings in Georgia and Colorado and that his administration would remain focused primarily on pushing forward legislative responses to the pandemic and its multimillionaire. infrastructure plan.

His decision has allowed critics to highlight how Biden fell short in fulfilling a remarkable campaign promise. Appearing in Nevada in February 2020, Biden promised to send legislation to Congress on his first day in office that would repeal liability protection for gun manufacturers and close loopholes in the federal gun background check system.

For weeks, administration aides have said the plans were still in the works, a stance that did not change in the wake of the recent shootings in Atlanta and Boulder, Colorado.