Bergevin: a new voice was needed 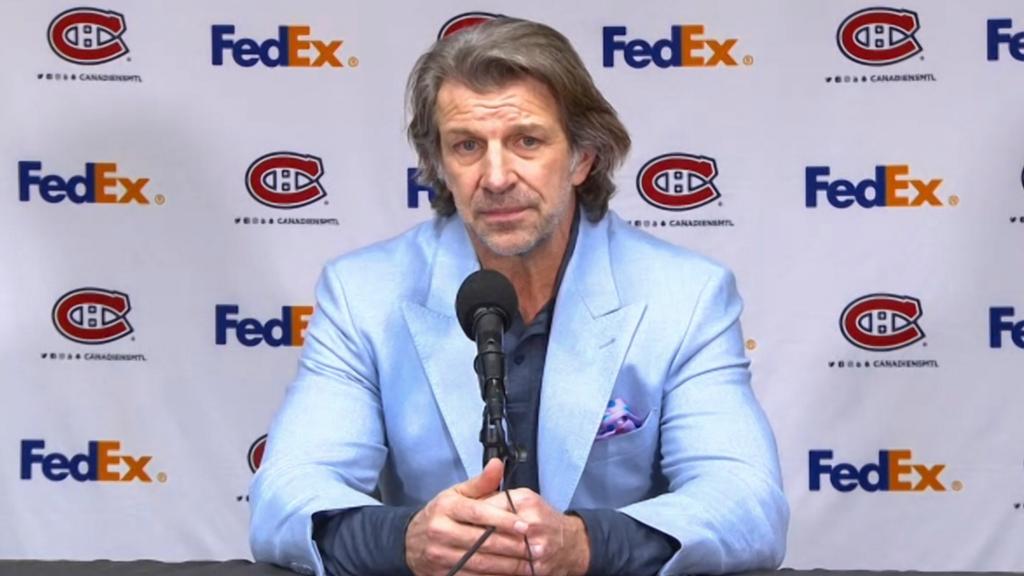 MONTREAL – With only 38 games remaining in the regular season and his hockey club falling short of expectations, general manager Marc Bergevin felt compelled to turn things around.

By no means was parting ways with Claude Julien and Kirk Muller an easy decision, but Bergevin insisted the Canadiens needed to get back on track before losing more ground in the North Division standings.

Enter interim head coach Dominique Ducharme and Alex Burrows, who are tasked with helping straighten the boat for a team that has not won in three straight games and has just two wins in its last eight outings.

“The effort was always there. It shows that Claude did not lose his locker room, but I saw a team that was lost, that lacked a sense of direction,” Bergevin said via Zoom Wednesday afternoon from Winnipeg. “These things happen in professional sports. Coaches keep giving instructions, but after a while, the message is no longer conveyed. Based on what I saw over the last week and what happened last year, in a short season, I took the decision to make a change. “

There were several specific shortcomings in the Canadiens’ overall game that prompted Bergevin to act without further delay.

Both the power play and the penalty, which rank 20th and 22nd in the NHL, respectively, are top concerns, as is the team’s 3-5-0 record at the Bell Center.

The fact that his players have racked up the third-most penalty minutes in the league behind Vancouver and Ottawa doesn’t sit well with him either.

But the bottom line is that Bergevin no longer recognized the team that shot out in mid-January, bombarded opponents, scored at will and posted seven wins in its first 10 games.

“When we play at the top of our game, we are killing plays, we are moving the puck, we are supporting the puck, we are going through the neutral zone with speed. That’s when our team is at our best, and that was not happening in this moment, “Bergevin emphasized. “The difficult thing to see is the change from being a very good hockey team that played with rhythm, was committed and played with their identity, which is speed, and then going to the other side where we were a team looking for Anything. We were chasing our tails, we were chasing the puck, we were out of sync. That was frustrating for me. Injuries could be blamed sometimes, but we didn’t have any. “

@CanadiensMTL Tweet: From QMJHL to World Junior Championships, Dominique Ducharme has been successful everywhere he has been. Meet the Canadiens’ New Acting Head Coach

It should come as no surprise, then, that Bergevin addressed the team in private after Julien and Muller were relieved of their duties, basically putting the responsibility of getting back into form under Ducharme’s leadership.

“It was clear. The bar is high. I have confidence in them, but all the players who wear the Montreal Canadiens uniform should give more,” Bergevin insisted. “I told him that everyone here, for a man, must be better, must improve his game, each and every man. That was my message. That is what to do.”

When Bergevin contemplated the installation of a new bank manager, it was sold to Ducharme immediately.

Citing the 47-year-old Joliette, the modern approach and the QC native’s extensive resume, Bergevin deemed him the ideal candidate to take the helm before a major two-game set against the Jets.

Hired as an assistant coach with Montreal in April 2018, Ducharme certainly has a good idea of ​​where the heads of his troops are at the moment, which is why he will start running at Thursday’s morning skating.

There’s no question that familiarity will speed up the tuning process significantly, hopefully bringing out the best in the Canadiens at Bell MTS Place and beyond.

Bergevin is counting on it.

“I have great confidence in Dominique and what he will bring to the team,” praised Bergevin, who confirmed that Ducharme would be in charge until the end of the season before a decision on his status was officially made. “I think it will be able to bring our players to the level where they were before, where we can be more consistent in the way we work.”