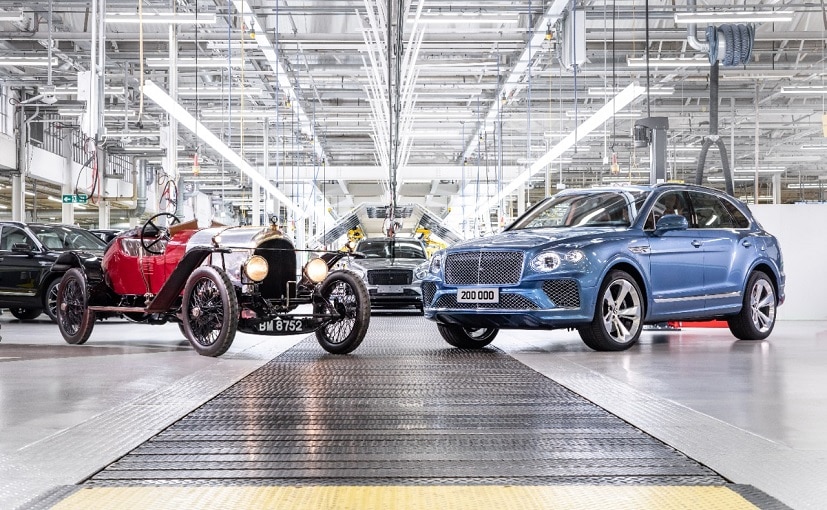 The manufacturing milestone is even more remarkable when you consider that the 200,000th car is the last of 155,582 vehicles built at Crewe since 2003.

Bentley Motors has celebrated the 200,000th luxury car made in the company’s 100-plus year history. The Bentayga Hybrid, intended for a Chinese customer, met the oldest surviving Bentley, EXP 2, and several longtime colleagues, when it rolled off the production line at Bentley’s Crewe home this week. This crowns an extraordinary 20-year period in which the success powered by modern models like the Continental GT and Bentayga has truly changed the face of Bentley Motors.

The Bentayga HybriD met the oldest surviving Bentley, EXP 2, and several longtime colleagues, when it rolled off the production line at Bentley’s home in Crewe.

The manufacturing milestone is all the more remarkable when you consider that the 200,000th car is the last of 155,582 vehicles built at Crewe since 2003, the year the Continental GT was originally launched as Bentley’s first modern-era model. . Today, Bentley makes 85 cars a day, the same production in a month two decades ago.

Compared to Bentley’s modern era, in the year of Bentley’s first existence, from 1919 to 2002, the company made 44,418 luxury cars, 38,933 of them at Crewe. Among that total were many iconic models of its time, including the Bentley Blower, R-Type Continental, Mulsanne, Arnage, and Azure. Incredibly, records show that 84 per cent of all cars made for the UK market are still on the road today.

A major investment program at the Crewe factory since 2003 has gone hand in hand with the success of the Bentley Continental GT, the ultimate luxury Grand Tourer. The individual made-to-order 80,000 model was built in January this year.

Bentley President and CEO Adrian Hallmark comments: “This production of the 200,000th car is just the latest milestone in Bentley’s extraordinary journey since its founding in 1919. In 2003, the introduction of the Continental GT represented a transformation. moment for the brand, and this Bentley alone, has accounted for 80,000 sales out of our 200,000 total, and has created a new segment and contemporary image foundation for the Bentley business. “

Bentley will move to full electrification, just PHEV or BEV, by 2026, then switch the entire model range to battery electric vehicles by 2030.

Looking ahead, Bentley Motors’ ambitious plans for car production were outlined in November 2020, with its groundbreaking Beyond100 strategy. The company aims to be end-to-end carbon neutral by 2030, and the climate at the Crewe factory is positive thereafter.

Bentley will move to full electrification, PHEV or BEV only, by 2026, then shift the entire model line to battery electric vehicles by 2030. The industry-leading Beyond100 strategy will transform all aspects of the business as Bentley accelerates toward its second century of luxury. automobile production.