This is the price we have to pay for having long tolerated management practices in the [state-run] banks and types of lending, which paid inadequate attention to portfolio practices and recoveries. I may add that while undertaking such a large injection of capital into the banks, specific commitments will be required from each bank to ensure that their future management practices ensure a high level of portfolio quality so that the earlier problem does not recur.”

Sounds finance minister Arun Jaitley chiding state-run bank chiefs, doesn’t it? Wrong. It’s not Jaitley; it’s Manmohan Singh in his role as the head of treasury in 1994 in the Narasimha Rao government when he invested a princely sum of Rs 5,700 crore to bail out banks. Today, a single bad loan account is many times that.

Rating companies, bankers and investors have all given a thumbs-up to the government’s proposal to invest Rs 2.11 lakh crore to give a new life to state-owned banks, but the question in the minds of seniors is what is the possibility that one Mr XYZ won’t be repeating Singh’s words in 2030?

“So, the whole issue is what is the vision and role of public sector banking in the banking system and the financial sector… that has not been defined,” says YV Reddy, former governor, Reserve Bank of India who navigated the industry through many crises. “So, what is happening is disjointed incremental efforts. And this is not now; it has been happening from the first Narsimhan committee,’’ set up in 1991.

INDIA’S ‘TARP’
Last week saw one of the monstrous rallies in the stocks of Indian state-run banks, which even market veterans had never witnessed. For example, Punjab National Bank rallied 49%, State Bank of India 26% and Bank of Baroda 25%, thanks to the long-awaited capital investment from the government.

The Narendra Modi government is likely to front-load the capital infusion by recapitalisation bonds worth of Rs 1.35 lakh crore and promised Rs 18,000 crore of budgetary support, which is Rs 2,000 crore short of what was projected under the Indradhanush scheme initially using taxpayers’ money, and raise Rs 58,000 crore from the markets through share sale.

While the details of the bond issue and pie sizes for various banks are being worked out, there is growing belief that this time around, the government will prescribe strict parameters to provide capital unlike in the past where it focused only on credit growth rate, and mandated social obligations.

“Even though it is a mega capital infusion this time, in my view, it will come with certain performance and strengthening of organisational structure, risk management,” says Rajnish Kumar, chairman, State Bank of India. “There has to be a specific target on return on equity given to banks that has to be reached within a given time frame.”

This could well be equivalent of the US’ Troubled Assets Relief Programme (TARP) when the government came up with $800 billion bail-out plan for the economy after Lehman Brothers explosion singed global financial markets in 2008.

In the past governments as the largest shareholder did not insist on business metrics, but used PSU banks to fulfil their political and social goals. For years, the government was investing regular amounts of capital which hit its finances. Banks received over Rs 75,000 crore in the past four years apart from their share sale to investors including the Life Insurance Corp of India. 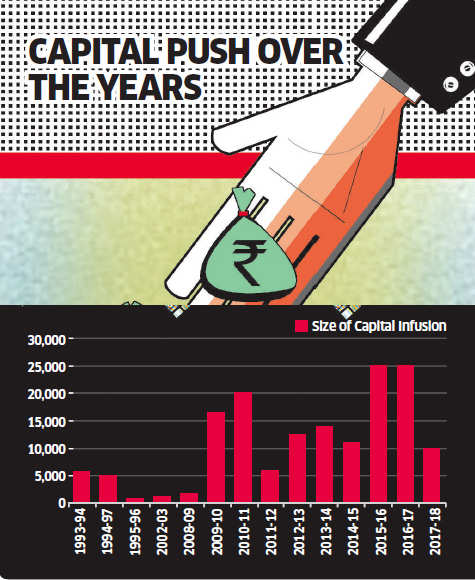 BAD LOANS & RETURNS
India’s economic growth plunged to a three-year low in the June quarter to 5.6% as over-leveraged companies struggled to borrow more and invest. At the same time, banks were reluctant to lend as they feared more bad loans. Furthermore, the sins of the past were squeezing the banks. They are sitting on a pile of Rs 9.5 lakh crore of sticky loans, which is nearly 12% of their loan badets as RBI forced these lenders to dig out the hidden NPAs from their closets.

For many, who were looking for an easier bad-loans-recognition regime after Raghuram Rajan’s exit as the governor of RBI, his successor, Urjit Patel, turned out to be a shock. Beyond tightening the bad-loans recognition, the empowered RBI under Patel is forcing banks to take defaulters to courts, write down mbadive amounts, which turned out to be a pincer moment for banks.

At least six state-run banks — Bank of Maharashtra, Central Bank of India, Dena Bank, IDBI Bank, Indian Overseas Bank and Uco Bank — have come under special RBI watch which is called Prompt Corrective Action. These banks financials have deteriorated so badly that RBI directs them nearly on a day-to-day basis how to run the bank with hopes of nursing them back to health.

“Infusion of capital will not be sufficient for a revival of the banking system unless a host of other measures is also taken to improve credit delivery discipline, and raise the level of skill set of banking personnel,” says K Cherian Varghese, who headed Union Bank of India and Corporation Bank between 2000 and 2006. “Lending under ‘corporate loans’ given without any specific project has paved the way for diversion of funds including alleged repayment of old loans in some banks resulting in ‘evergreening’ of overdue credit.”

Bad loans and poor return ratios reduced their ability to provide for loan losses and continue their lending activities.

“They were unable to take proper hits on their non-performing loans,” says Anil Agarwal, badyst at Morgan Stanley. “This, in turn, was making them push out recognition and provision – hurting chances of earning a reasonable RoE. Proper recapitalisation has the ability to break this vicious cycle. Now, banks can take the required hits, make proper provisions, and move ahead. The insolvency code was helping NPL resolution – now, this will accelerate.”

A NEW BEGINNING
Capital is a welcome raw material for the struggling banks, but does that suffice for them to get back to business? Not at all. State-run banks face legacy issues such as regional concentration, trade unionism, inability to come up with differentiated products, lagging behind private peers in customer satisfaction and many others. Human resources is the next issue the government has to tackle, and it has to lean on the Banks Board Bureau to fix it.

“The role of the government is to appoint the right kind of people on the board or finding the right MD and CEO,” says SBI’s Kumar. “The government will have to take care so that improvements are made. They may also look at appointing high-quality board and a high-quality management team, then everything will fall in place.”

Whether a government and the regulator admit it or not, banking crisis would recur in every country every two or three decades, though the magnitude and reasons behind them may vary.

Whether it is a capitalistic state like the US, or a socialist one like Greece, it is the government which has to bail out. If it is a private enterprise, the government has the flexibility to choose and exit in profits like the US did after the Lehman crisis.

If the state owns banks, it may have to bear dip into its resources and shoulder the responsibility of revival when the revenues could be used to build social infrastructure.

From the first bail-out since liberalisation when the government-owned 100%, stakes have fallen. So, should government take its stake below 51?

“A call the government has to take politically… do they really need to own 51% in so many state-owned banks?’’ says Shikha Sharma, chief executive at Axis Bank. “The government has got out of a lot of sectors, which earlier they used to own. Now, they are talking about divesting Air India, so it will be a big statement when that happens.”

Finance Minister Arun Jaitley and Prime Minister Narendra Modi have not signalled what’s in store for the future of banks. And for the moment, consolidation is also on hold. “But what matters next is how the government is going to have a proper vision; the first leg is fine, but the second leg is yet to be defined,” says YV Reddy.