Astronomers capture a new polarized view of a black hole 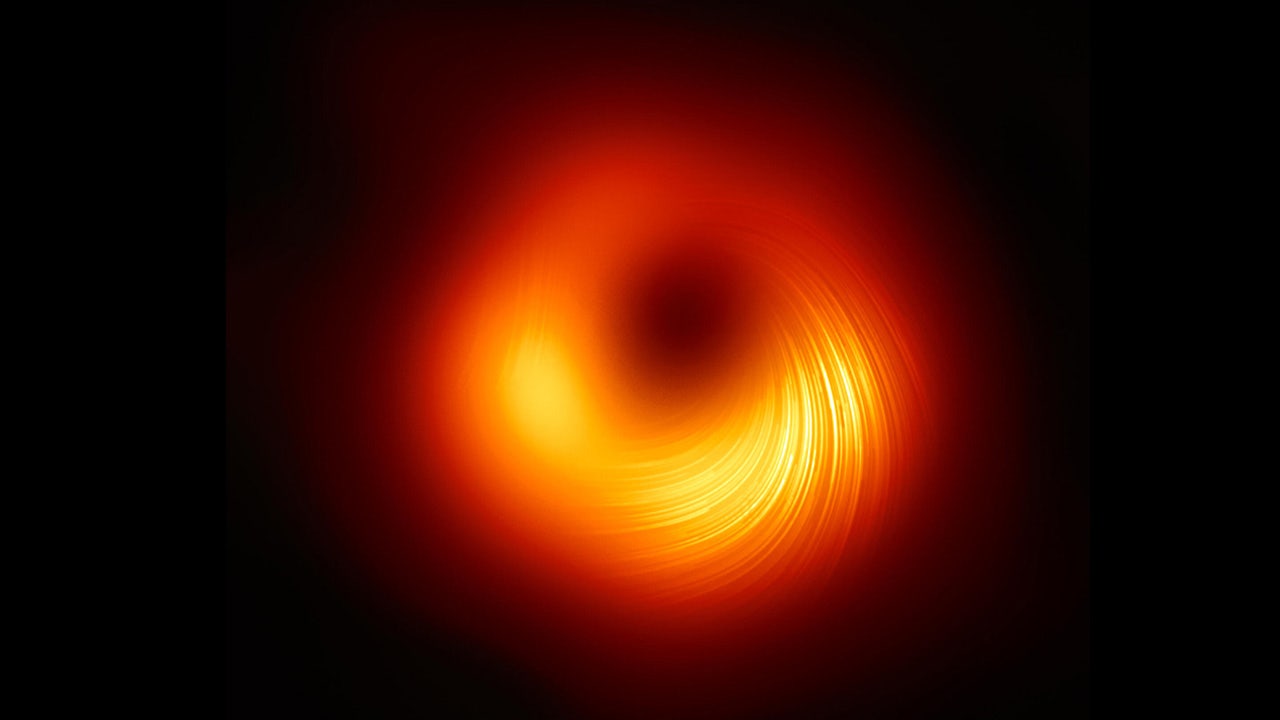 Scientists at the international collaboration Event Horizon Telescope (EHT) announced Wednesday that they had been able to map magnetic fields around a black hole using polarized light waves for the first time, releasing a stunning image of the supermassive object at the center of Messier. 87 (M87) galaxy.

The team of more than 300 researchers had produced the first image of a black hole, from 55 million light years away, in April 2019.

The researchers published their most recent observations in two separate articles in The Astrophysical Journal, which they say are key to understanding how the galaxy M87 is capable of “launching energetic jets from its core.”

From data first collected in 2017, scientists discovered that a significant fraction of the light in the near horizon region of the black hole was polarized.

Light becomes polarized as it passes through certain filters or when it is emitted in hot regions of space that are magnetized.

For the first time, EHT scientists have mapped the magnetic fields around a black hole using polarized light waves. With this breakthrough, we have taken a crucial step in solving one of the greatest mysteries in astronomy.
(EHT collaboration)

The astronomers gained a sharper look around the black hole and the ability to map the magnetic field lines in the surrounding area, by examining how the light around it was polarized.

“These 1.3 mm wavelength observations revealed an asymmetric compact source morphology similar to a ring. This structure originates from synchrotron emission produced by the relativistic plasma located in the vicinity of the black hole,” he said. the group in their observation post. “Here we present the corresponding linear-polarimetric EHT images of the center of M87. We found that only part of the ring is significantly polarized. The resolved fractional linear polarization has a maximum located in the southwestern part of the ring, where it rises to the level of ~ 15%. “

The group also noted that the polarization position angles are arranged in an “azimuthal pattern.”

ASTEROID FLIES SAFELY OVER THE EARTH ON SUNDAY

Azimuth is the angle between a fixed point such as true north, measured clockwise around the observer’s horizon, and a celestial body.

The team wrote that they had made “quantitative measurements of the relevant polarimetric properties of the compact emission” and found “evidence of the temporal evolution of the polarized source structure” over the course of a week.

The data was then collected using multiple independent imaging and modeling techniques.

In an accompanying statement, the collaboration explained that the energy jets emerging from M87’s core extend at least 5,000 light-years from its center.

While most of the matter near the edge of a black hole falls into it, some of the surrounding particles are ejected in the opposite direction in jets.

Astronomers still don’t fully understand this process, or how matter falls into the black hole, but the new EHT image provides information on the structure of the magnetic fields just outside the black hole.

Only theoretical models with strongly magnetized gas could explain the event, the statement said.

“All astronomical objects from the Earth to the Sun and galaxies have magnetic fields. In the case of black holes, these magnetic fields can control how quickly they consume the matter that falls on them and how they expel some of that matter in narrow beams traveling at close to the speed of light, “Geoffrey C. Bower, an EHT project scientist at the Academia Sinica Institute of Astronomy and Astrophysics in Hawaii, told Fox News by email. “We show that the fields are strong enough to play an important role in the way this black hole eats its lunch.”

The EHT collaboration is an evolving network of telescopes in Chile, Spain, Antarctica, Greenland, France, Hawaii, Arizona, and Mexico.

To observe the galaxy M87, the collaboration linked eight telescopes to create the EHT: a “virtual telescope the size of the Earth” with a resolution “equivalent to that necessary to measure the length of a credit card on the surface of the Moon.” .

“This configuration allowed the team to directly observe the shadow of the black hole and the ring of light around it, with the new [polarized-light] image clearly showing that the ring is magnetized, “the statement said.

“Nobody had done this kind of image before,” Bower said. “Surprisingly, the data that make up this image is the same that was used to make the first iconic image of a black hole released two years ago. It took two years to analyze the data in a new way that allows us to separate the polarizations of light. ., a process like putting polarized sunglasses on our telescope. “