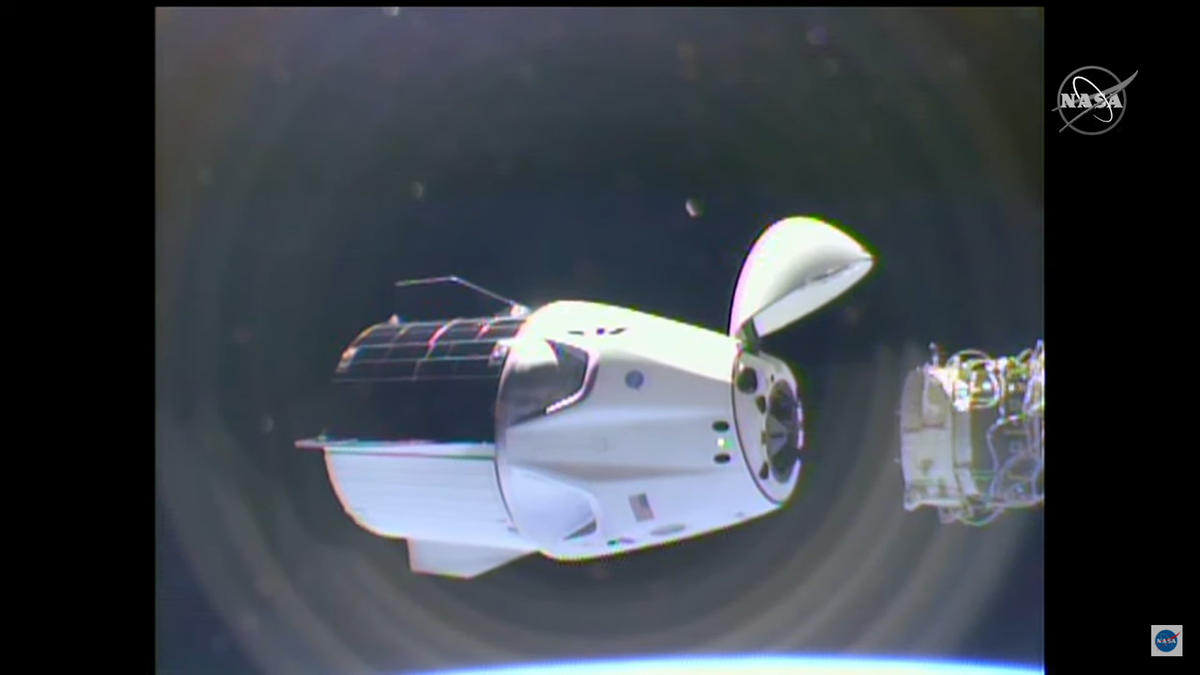 NASA’s SpaceX Crew-1 astronauts completed the first commercial crew port relocation on the International Space Station on Monday (April 5), while moving the Crew Dragon Spaceship in preparation for the arrival of the next crew.

The relocation was carried out by NASA astronauts Michael Hopkins, Victor Glover and Shannon Walker, along with Japan Aerospace Exploration Agency (JAXA) astronaut Soichi Noguchi. The crew undocked the Crew Dragon, nicknamed Resilience, from the forward port of the space station’s Harmony module at 6:30 a.m. EDT (1030 a.m. GMT) and reconnected to the module’s spaceport at 7:08 a.m. EDT (1108 GMT). ). .

The astronauts moved Resilience to a different port on the space station to make room for a Crew Dragon spacecraft due to arrive later this month, called Endeavor, which will dock at the forward port of Harmony. The arrival SpaceX Crew-2 mission includes NASA astronauts Shane Kimbrough and Megan McArthur, JAXA astronaut Akihiko Hoshide, and European Space Agency (ESA) astronaut Thomas Pesquet. The crew is scheduled to launch to the space station on April 22 from Launch Complex 39A at NASA’s Kennedy Space Center in Florida.

Related: Meet Crew-1: These are the 4 astronauts who are flying SpaceX’s Crew Dragon

“We are very excited about [moving Resilience] and we would like to congratulate the entire Expedition 64 team, as well as Team Dragon Crew-1. Congratulations to the commercial crew program for 10 years. What an amazing 10 years this has been, “Hopkins said during a call with Steve Stich, NASA’s Commercial Crew Program manager, from the space station on Friday (April 2).” Thinking about where it started and where we are now, and now we’re getting ready to take this vehicle out for a spin. … We are all very excited to be a part of this. “

On March 19, the NASA astronaut Kate rubins, together with two Russian cosmonauts Sergey Ryzhikov and Sergey Kud-Sverchkov, relocated the Soyuz MS-17 spacecraft from the station’s Rassvet module’s Earth-facing port to the space-facing Poisk port. However, unlike the Soyuz relocation maneuver, which required manual flight, the Crew Dragon is operated autonomously.

“It’s great and it’s an amazing sight to be separated from your vehicle, which has been your home for months, and to be able to look at it from 60 meters. [about 200 feet]”Rubins said during the call from the space station, that NASA shared on YouTube Friday (April 2).

In preparation for Monday’s relocation, Hopkins said he would spend his Easter Sunday making sure to clean up everything from the Crew Dragon spacecraft, his version of an Easter egg hunt, as he had stayed at Resilience for the past few months. he said during the call.

The spacecraft has been “largely inactive” since SpaceX Crew-1 astronauts arrived at the space station on november 16. So the crew prepared for the move by checking that Resilience’s communication systems were working and completing suit fit checks, which Hopkins said “went very well” during the call.

Crew-1 is scheduled to return to Earth in late April or early May, leaving the space-facing port of Harmony vacant by the time a Dragon cargo ship arrives with supplies and the first set of new solar panels. for the space station later this summer. Rubins and Glover began preparing the space station for the new solar panels during a spacewalk on February 28, when they installed one of the two mod kits required to support the new dies. The Dragon cargo spacecraft will need to dock in the space-oriented port to allow robotic removal of new solar panels from Dragon’s trunk using Canadarm2, according to a statement from NASA.

While today’s relocation maneuver was the first time a Crew Dragon spacecraft needed to be moved, it is likely not the last, given that the Crew-1 mission is the first of six. certified crew missions NASA and SpaceX have planned it as part of the agency’s Commercial Crew Program, according to the statement.