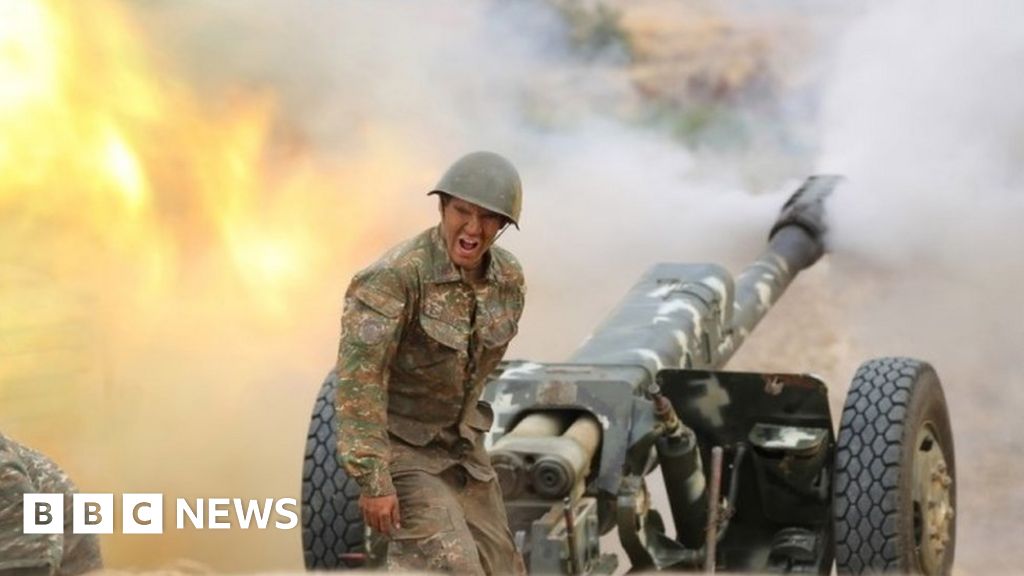 Azerbaijan and the Armenian army have deferred calls for infighting in a disputed area in the southern Caucasus, where fighting has escalated in recent times.

On Thursday, Russia and France called for a cease-fire in the Nagorno-Karbakh region, the most horrific of the violence there in decades.

But heavy firing continued throughout the night in the area’s main city and exploded.

Officially part of Azerbaijan, the region is ruled by ethnic Armenian.

The two former Soviet republics fought a war on the region in 1988–94. Although Armenia backs the self-proclaimed republic, it has never been officially recognized.

It is unclear what led to the renewed fighting, which broke out on Sunday and is the heaviest since the 1994 ceasefire.

Dozens have been killed along with hundreds of injured, and there is growing apprehension that international powers may be dragged into conflict.

What is the latest?

French President Emmanuel Macron and Russian President Vladimir Putin spoke on Thursday and discussed the need for immediate de-escalation in the region.

“[They] The need for a joint effort to reach a ceasefire was agreed, ”President Macron’s office said in a statement shortly after the telephone call.

“[We] A Kremlin statement said the warring parties were called in to stop the fire altogether and ease tensions as soon as possible.

Russia has also offered to host Armenia and Azerbaijan foreign ministers for talks.

Russia is part of a military alliance with Armenia and is a military base in the country. However, it also has close ties to the Azerbaijan government.

Following talks between Mr Macron and Mr Putin, the Kremlin released a statement in which they said they discussed future steps that the Minsk Group of the Organization of Security and Co-operation Organization in Europe could help resolve the conflict .

The Minsk Group was founded in 1992 and is headed by France, Russia and the United States.

The two leaders expressed “readiness” to see a statement made on behalf of the group, which would call for an “immediate” end to the fighting and the beginning of peace talks.

A fighter told BBC Arabic earlier this week that he had been recruited in northern Syria and sent through Turkey to fight in the conflict. Abdullah – not his real name – said that he was sent to “Nagorno-Karbakh” wearing the uniform of Azerbaijan soon after the fighting began.

But Turkey has disputed that claim, and an adviser to Turkish President Recep Tayyip Erdogan dismissed the report as “completely baseless”. Azerbaijan’s ambassador to the United States has also denied reports of Turkey’s involvement.

The Syrian Observatory for Human Rights reports that about 900 Syrian mercenaries have been sent to Azerbaijan by Turkish security companies. But they say fighters of Armenian descent in Syria have also been sent to Armenia to join the fight.

The rise is the threat of a widespread regional war

After a few days the previous escalation between Armenian and Azerbaijani forces has been absorbed. The intensity of the current battle indicates that this time is not possible.

For the first time since the 1990s, populated areas within the contested region of Nagorno-Karbakh have been affected by missile attacks and bombings. Civilian targets have also been hit in Armenia and Azerbaijan.

Both sides appear to be digging in for a long struggle.

Azerbaijan has rejected renewed negotiations with Armenia, and Turkey has a greater degree of support to count it with the previous increase.

The danger here is that the involvement of external powers in a long, protracted conflict will increase and there will be a danger of widespread regional war.

What is happening on the ground?

Heavy shelling continued on Thursday and both sides claimed damage.

Meanwhile, authorities in Nagorno-Karbakh said the situation there was “tense” and the fire was exchanged.

According to the news agency AFP, “The enemy attempted to regroup his troops, but the Armenian forces suppressed all such attempts.”

Two French journalists for the Le Monde newspaper were also injured during the shelling in the nearby Armenian city of Martuni.

Azerbaijan published a video of what they said about destroying two “enemy” tanks, and that an Armenian battalion had fled the area around the village of Tonashen.

Armenian media said that three civilians were killed in an Azerbaijani airstrike on the town of Martarkart on Wednesday. The state news agency Armenpress said seven civilians and 80 service personnel have been killed since the fighting began.

Armenia’s Ministry of Defense also released a photo of an Armenian SU-25 jet stating that it was shot down by a Turkish F-16 on Tuesday. Azerbaijan’s staunch ally Turkey has dismissed the allegation as “cheap propaganda”.