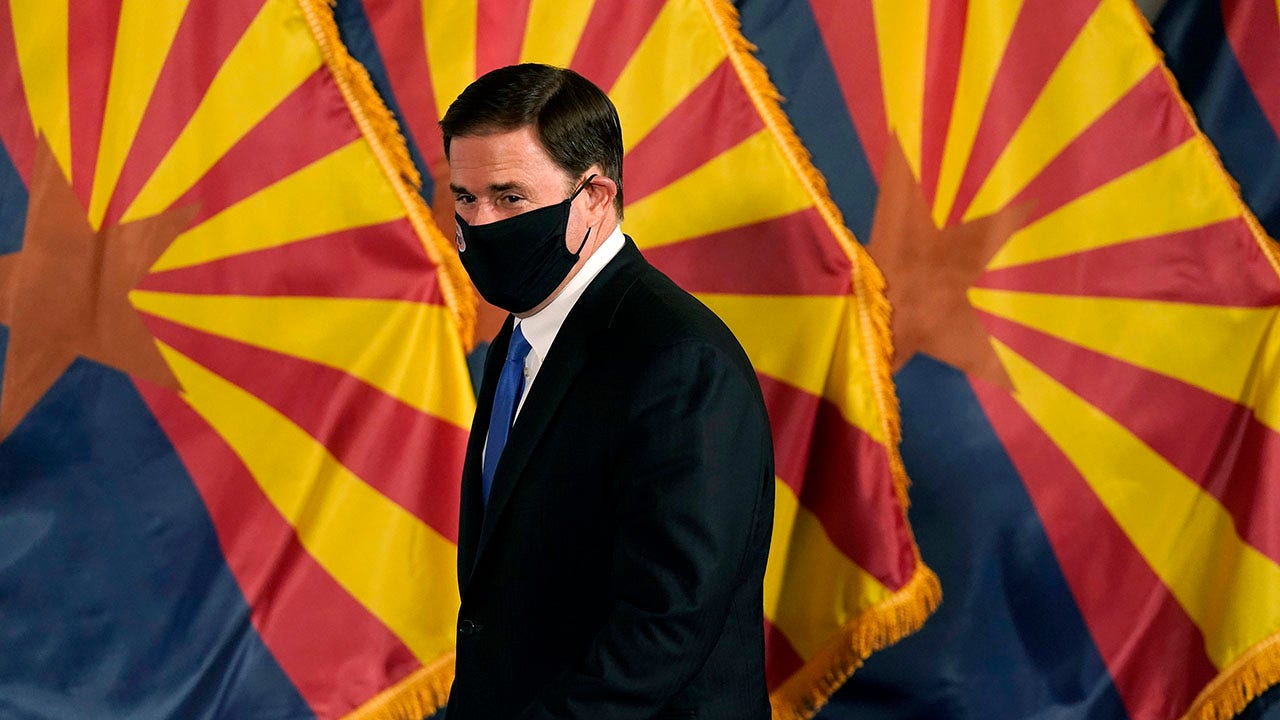 In a statement accompanying an executive order Thursday, Ducey’s office explained that the decision to implement the changes was based on several “key data points.”

Ducey cited 10 weeks of declining coronavirus cases, hospitalization numbers at their lowest since early October; President Biden’s promise that all Americans could get the vaccine by May 1; the opening of immunization appointments for all Arizonans age 16 and older; a March 17 report from the US Centers for Disease Control and Prevention (CDC) that found the Grand Canyon state to have the third highest vaccination coverage for highly vulnerable counties; and reach the milestone of more than three million doses administered.

“We have more than 3 million doses. President Biden and Vice President Harris have discussed the way we distribute vaccines here and have called us a national model,” CJ Karamargin, Ducey’s director of communications, told Fox News Friday. .

“Based on the efficient and effective way of getting the vaccine into the arms of all Arizonans who want it, we are confident that we are on the right track here. This is the light at the end of the tunnel, and we are accelerating toward.” , He said.

The state’s seven-day average for cases and deaths has also declined since the beginning of the year and the Johns Hopkins Coronavirus Resource Center reported its seven-day moving average of positive percentage at 1.87% as of Friday morning.

On Friday, the Health Department reported 571 new cases and 24 deaths.

It’s an overall positive trajectory after 2020, during which cases and hospitalizations reached record levels during the summer and at the end of the year.

In this file photo from Jan.12, 2021, several tents are set up so that registered individuals can receive their COVID-19 vaccinations as they drive through the State Farm Stadium parking lot in Glendale, Arizona. (AP Photo / Ross D. Franklin)

Notably, Arizona never completely shut down like California or New York, nor did Ducey establish a statewide mask mandate. The peak cases in December and January forced him to expand health and safety requirements for public events and impose sanctions on companies that repeatedly ignore security procedures.

While some were frustrated by the scope of Ducey’s mitigation efforts, February was a turning point as more than 1 million residents received vaccinations.

Now, about a quarter of the Arizona population has received at least one dose of the COVID-19 vaccine; approximately 16% are completely inoculated.

“As we’ve said all along, vaccine distribution is our best way to get back to normal, and I want to thank the millions of Arizonans who have rolled up their sleeves to make distribution and acceptance so successful,” Ducey said. . in the statement.

“In Arizona, we never closed, so it is impossible to have a grand reopening. Instead, we continue to take reasonable, safe and sensible steps. The measures implemented last summer allowed Arizona to fight COVID-19.” added. “I want to thank the local leaders who supported these efforts with their own measures and the companies that implemented them. Today we are in a different place and we are also much smarter.”

“I am confident that the businesses and citizens of Arizona will continue to practice fundamentals and act responsibly as we gradually return to normalcy,” concluded Ducey.

Events with more than 50 people will no longer need local government approval, although they are encouraged to follow CDC guidance.

Lastly, local mask mandates, which will not affect the mask mandate in K-12 schools, will be “phased out.”

“Some local governments have implemented ‘mandates’, however, they have rarely, if ever, been fulfilled,” the statement said. “Under this latest action, those local mandates will be phased out. The use of masks continues to be encouraged, especially in groups that are not vaccinated.”

That said, Tucson’s Democratic Mayor Regina Romero has already said that she does not intend to lift her city’s mask mandate and critics argue that relaxing the guidelines now could counter any progress in decreasing broadcasting. of COVID-19 as mutations spread across the country.

The overall reaction to Ducey’s order was largely partisan, The Associated Press noted Thursday, with Republican officials praising the move and Democrats criticizing it.

“It is unfortunate that Governor Ducey is giving in to far-right political pressure instead of following the science and doing what’s best for Arizonans,” Romero said in a statement.

“The governor clearly cares much less about the people of Arizona than he does about their political future,” he said.

Democratic state representative César Chávez, also from the state capital, warned that relaxing restrictions “could counteract the great results we have had in recent weeks. I want normality but I also want herd immunity against # COVID19.”

Chávez’s position is backed by health officials, according to The Arizona Republic, which reported Thursday that both the Arizona Medical Association and Arizona Health System Alliance He said the state must not yet “give in” or “become complacent” as the virus continues to spread and claim lives.

In contrast, some local leaders said they would lift their terms in accordance with Ducey’s order, as in Maricopa and Chandler County.

SLEEPING POORLY, BURNING MAY INCREASE THE RISK OF CORONAVIRUS, CLAIMS FROM THE STUDY

Others weren’t so sure, and Tempe Mayor Corey Woods told the Republic that he planned to meet with council members to discuss how best to proceed.

“Arizona is finally free!” she tweeted on Thursday.

“Better late than never,” Sen. Michelle Ugenti-Rita, R-Scottsdale, tweeted Thursday. “For all (Arizonans) who have suffered so much during the close of this year, we are coming slowly but surely.”