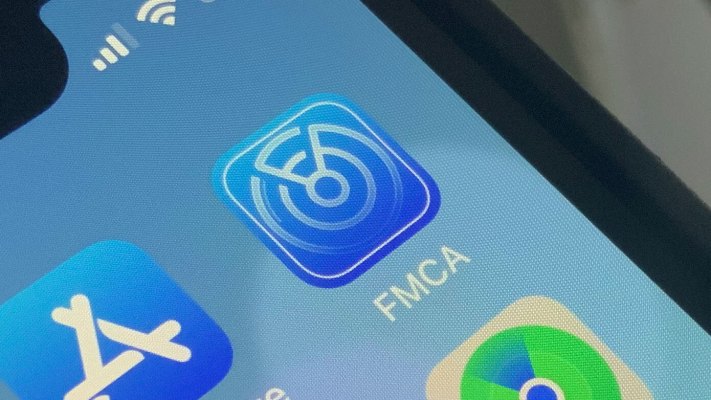 Apple has released a new app, Find My Certification Asst., Designed for use by MFi (Made for iPhone) licensees, who need to test their accessories for interoperability with Apple’s Find My network. The network helps users find lost Apple devices, such as iPhones, AirPods, and Mac computers, among other things, but is poised to add support to find other compatible third-party accessories.

According to the description of the application, MFi licensees can use Find My Certification Asst. to test the “discovery, connection and other key requirements” for your accessories that will incorporate Apple’s Find My networking technology. It also points to information about the Find My network certification program on Apple’s MFi portal at mfi.apple.com, which currently refers to Find My network as a “coming soon” MFi program technology.

Screenshots of the new application indicate that it allows device manufacturers to run a wide variety of tests in areas such as connectivity, sound (for example, if the item can make noise when lost), firmware, key management, NFC , energy and more. 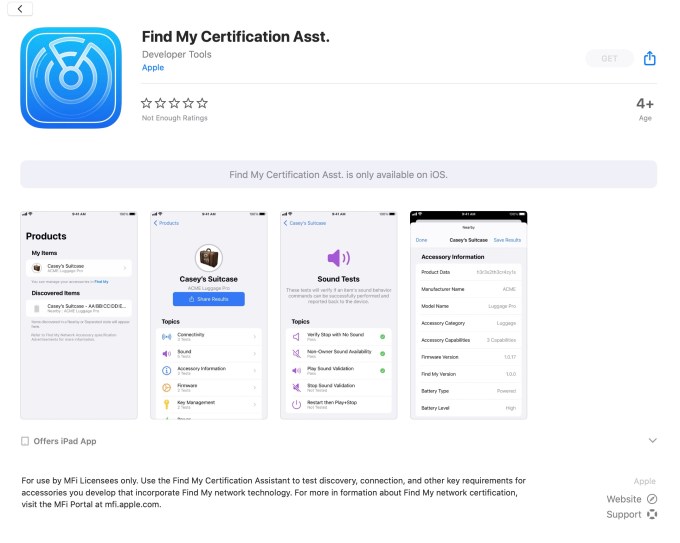 The app was publicly available on Sunday, April 4, on the iOS App Store, according to Sensor Tower data. It is brand new, so it is not yet classified in any category of the App Store, including its own, “Developer Tools” or others. It also has no ratings or reviews at this time.

The app’s launch is a step toward the broader goal of opening up the Apple Find My network to third parties and Apple’s planned launch of its own new accessory, AirTags.

Apple, at last year’s Worldwide Developers Conference, first announced that it would open Find My to third-party devices after facing pressure from regulators in the US and Europe who had been investigating, among other things, whether Apple had planned to give itself a head start with its upcoming release of AirTags, a competitor to Tile’s lost and found finder.

Tile, a prominent Apple critic, had complained that AirTags could connect with Apple’s U1 chips, which use UWB (ultra-wideband) technology for more precise search capabilities, and noted in a congressional hearing that AirTags would work with Find My by Apple. application, which is shipped by default on Apple devices. This, Tile believed, would give Apple a first-person advantage in the lost and found finders market that Tile had successfully established and dominated for years.

Apple, in response, opened third-party developers access to its U1 chip through its “Close Interaction” framework last year. As a result, Tile announced in January 2021 its plan to launch a new tracker powered by UWB.

More recently, Apple updated its Find My app to include a new tab called “Items” in preparation for the app’s expanded support for AirTags and other third-party accessories, such as those from Tile and others. This “Items” tab is enabled in Apple’s latest iOS 14.5 beta, where the app explains how the Find My app will now be able to help users keep track of their everyday items, including accessories and other items that are compatible with Find My.

However, Tile (and probably others) feel that Apple’s concessions are still a disadvantage for their businesses because participation in Apple’s FindMy program means that the third-party device maker would have to abandon its existing application and instead require your customers to use Apple’s FindMy app, effectively converting about your customers and their data to Apple.

It’s worth noting that upon launch, the app features an icon displaying three items: headphones, a backpack, and a suitcase. Perhaps it’s not a coincidence that Tile’s first integrations were with headphones Bose and luggage and bag makers Away and Herschel.

Apple has not responded to a request for comment on the launch of the new app.