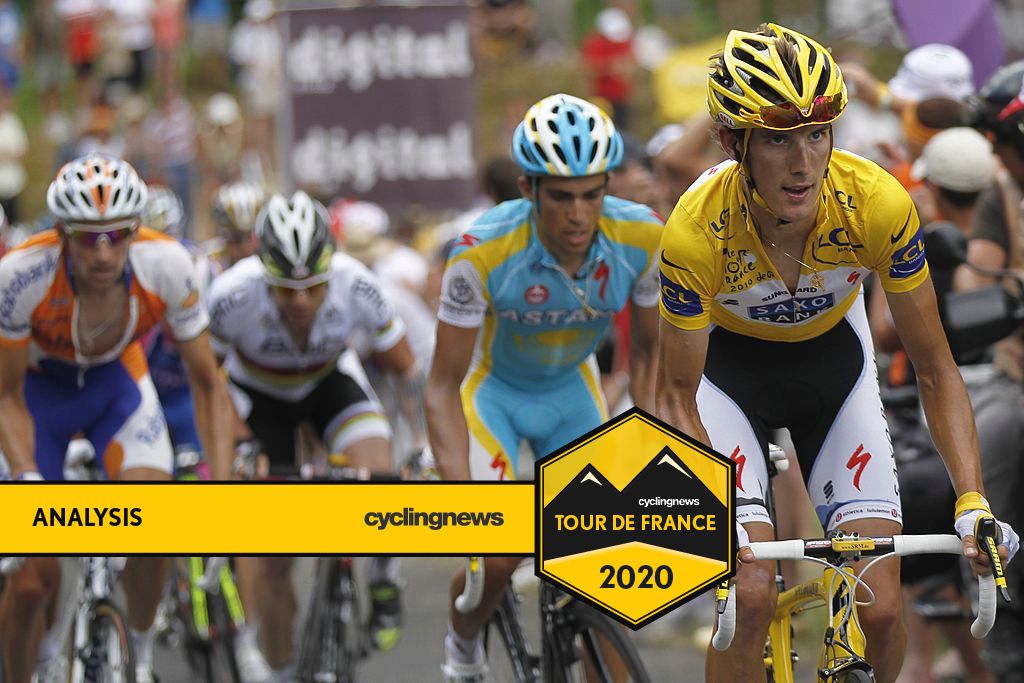 One week in the Tour de France and 2010 winner Andy Schleck returns to give his analysis and opinions on the top-10 contenders.

Former saxo bank climber gave Cyclingnews On the eve of the race and the nine stages in the journey his experts consider, he has been very accurate with predicting who will be near the top of the GC.

On the first rest day of the race, we checked in with Slack to see how his predictions were proceeding and whether any of the total contenders for the yellow jersey surprised him.

I still have Roglič as my favorite for the race. I think Tadej Pogkar will be his closest rival now but Rosalie still has five stars, and I think it would be incredibly difficult to defeat her.

Roglič just looks full of confidence, and I know we’ve already done some climbing in the tour, but only one HC climb, and it wasn’t a summit. I would not say that Roglič is unbeatable, but he has competed in an outstandingly excellent race so far. I am impressed by Jumbo-Wisma as to how he has also rode riders around Rosalie. It is actually more important than three weeks when it comes to saving energy and it is a little different from what Akash or Inios did in the past.

At the same time, they are like Sky in those early years, when they would take the lead and control the entire peloton. That strategy had to change a bit because teams only have eight riders but when you have a rider in your team like Wout Van Aert, who can pull over big mountains, that extends the effort to the rest of your climbers.

Well, the GC is over for Pinot, but now the pressure has completely stopped and he can race his own and not worry about time or yellow jersey. Of course, a lot depends on his back injury and if he can solve that problem for the rest of the days and then the two flatter stages that come during the next two days, but he is very much in my opinion for a stage win. Is a good candidate.

His form in the race was good, but like every year, this time also the problem remains. Last year it was his thigh, this year it is his back after his accident, but on the day of the crosswinds he was there and in front and I’m not sure what that means. After this race, I think he should try to change his approach back to Giro and win because he is still a good rider.

He looks more than okay, but he was definitely on the threshold at Peyresourde as he was dropped at one point and, although he had lost only a few meters, it was an important sign that suggested to me that his form was just Some of their rivals are also not as good.

When you are riding horseback to win the tour and you are in your best form, you do not leave any ground, not even a meter, and you do not say after that stage, when you just rode in yourself Were speed. If you are good enough, you just stay in the wheel and you don’t let yourself fall. That showed an element of weakness, but at stage 9 he was the best on a climb, which was steep and really suited him, and in the end, he was fighting there for bonus seconds so you definitely had him. Can not rule If he is not Rosalie’s biggest threat to form at this point rather than the actual time interval.

I think Bernal will get better in the Alps, but I think more is coming from Rosalie.

It’s all about the stages now for the Frenchman as he has lost a lot of time, but the problem for him is that once he gets into the break I doubt many of the riders will give him a turn as he is in the finals a lot. Is dangerous

He is still good enough to climb with the best 20 people if he is focused, form, and if he finishes in a small group many people do not wager against him in the sprint. This means that their best chance may come on stages that end with a climb but the break has been caught.

As things stand, I think Pogčar is the only person who can leave Rogue in the Alps. They took a huge amount of time on Pearsoord and it was not as if their rivals had stopped for urination – they were also going full gas.

He has been missing for more than a minute but he immediately told L’Equipe That he was not worried about the ditch as the mountains were coming up. To me, it has been shown that although he is still very young, he is an incredibly confident rider. He clearly believes in himself and has supported two important performances in the mountains.

I know he is young and does not have experience with some of his rivals, but Bernal won when he was younger, so it is hard to see Pogker falling in the third week.

He is clearly in shape – which was shown in Phase 9 when he went with the leaders, and he also attacked with Richie Porte the day before – but I think he is still missing a few percent when He goes against the very best riders. I think he’s good enough to follow and I can see him squeezing on the podium in Paris but I can’t see him making a difference.

To me, he is sleepy for some time, though, and you sometimes see him riding in places where he shouldn’t be if you’re a GC man. He calms down many times and I worry about his concentration many times.

He has been amazingly good. He is always in a good position and has shown that he can climb the best, although there was a slight weakness on Stage 9 when he could not accompany the group of Rosalie and Pogar to race the other day.

However, his problem may be his team. They actually protected him really well on the flats but in the mountains, Quintana looks a bit isolated. They have lost Diego Rosa in an accident, and Warren Barguil is not on the same level as their leader, so this means that Quintana has to be really careful to make the right moves. If he goes too early and is caught he may be in serious trouble.

I still think he’s in two stars because nothing really changed my opinion on Urain. He can be good, he can be bad, and we’ve seen him there. I think he is going to end up in the top 10, but I can’t see him making the podium at this point.

He is for Rosalie and his ambitions for GC came to an end at stage 8 when he sacrificed his opportunities to discover his leader and the yellow jersey. He has a huge amount of talent but the goal on the jumbo is now fully evident with Roglič being the only and undisputed leader.

He is not at the level I expected from him and that accident in the Critérium du Dauphin has clearly taken it out of him. 10 days ago wondering what the team’s plan was because it is hard to target the break, green jersey and then cross the GC fight but lost a lot of time for Buchman to be considered a contender now. If he can come around I can see him maybe trying to win a stage in the final week. However, to do so, he would actually have to lose too much time.

He is good but he is good most of the year. I always feel like something is missing from his arsenal, though, and he isn’t fully ridden when it comes to three weeks of racing.

I think this year’s level is great for him reaching the podium in Paris but he deserves credit for being included in this year’s race. Originally he was involved in the Giro race, but he focused his attention and was doing better than many, including himself.

He is surprised by the tour and a rider who was overlooked at the start of the race as I have not seen him race so much, but he watches the class on the bike and I am really impressed how he has raced for GC . He is a big hope for Kofidis and I am really looking forward to seeing how he will go in the Alps and that difficult final week.

He has shown a natural progression from his results over the past year and he knows what steps need to be followed. I have a question mark on him as he may have a bad day in the final week as he pushes himself but so far he is excellent and fully deserving of where he is on GC.