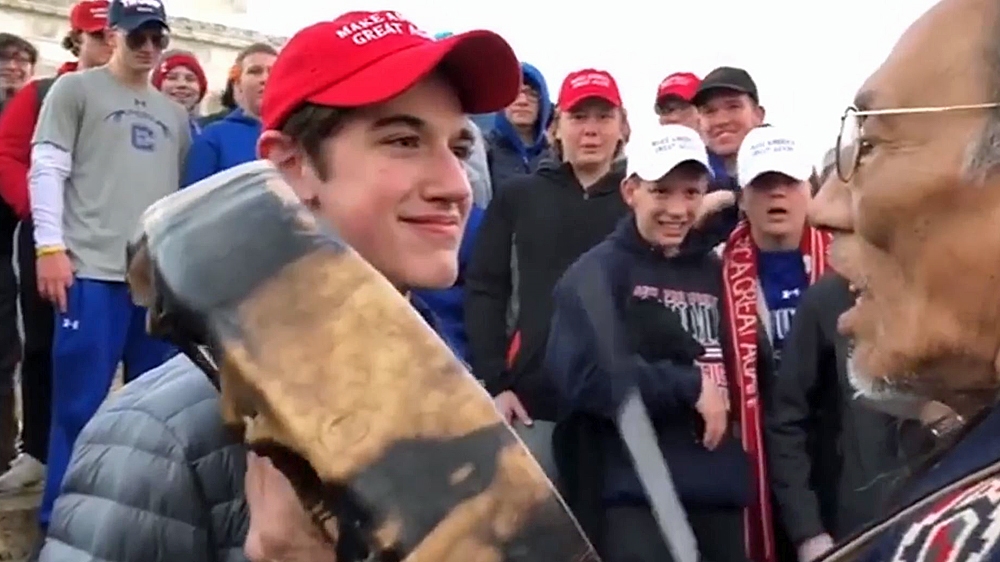 A diocese of the USA UU He apologized and vowed to take action after videos surfaced of children from a private Catholic school making fun of an elderly Native American at a rally in the capital, Washington, DC, which generated widespread criticism.

The March of Indigenous Peoples in Washington coincided on Friday with the March for Life, which attracted thousands of anti-abortion protesters, including a group from Covington Catholic High School in Park Hills, Kentucky.

The videos circulating online show a young man staring and standing very close to Nathan Phillips, a 64-year-old native American who sings and plays a drum.

They were surrounded by others, some wearing Covington clothes and many wearing "Make America Great Again" hats and sweatshirts, singing, laughing and making fun of them. Also present was a student wearing clothes from Owensboro Catholic High School.

In a joint statement, the Roman Catholic Diocese of Covington and Covington Catholic High School apologized to Phillips. Officials said they are investigating and will take "appropriate measures, up to and including expulsion."

"We extend our deepest apologies to Mr. Phillips," the statement said. "This behavior is opposed to the teachings of the Church on the dignity and respect of the human person."

According to the "Indian Country Today" website, Phillips is an elder from Omaha and a Vietnam veteran who holds an annual ceremony honoring Native American veterans at the Arlington National Cemetery.

Marcus Frejo, a member of the Pawnee and Seminole tribes, also known as Chief Quese Imc, said he had been part of the march and that he was part of a small group of people who remained after the rally when noisy students began to sing slogans such as "Make America great" and then began to make the haka, a traditional Maori dance.

Frejo told The Associated Press that he felt they were making fun of the dance and that they were also bothering a couple of black men nearby.

"When I was singing, I heard them say, 'Build that wall, build that wall,'" Phillips said, while wiping tears in a video posted on Instagram. "This is indigenous land, we're not supposed to have walls here, we never did it."

In another video posted on Twitter, the protester of the Indigenous Peoples of the March shouts "Just because you stole the earth do not make it yours", to which a student who carries the Owensboro Catholic High School logo answers: "The land is stolen , Is that how it works". That is the way of the world. "

Frejo said he joined Phillips to calm the situation, singing the hymn of the American Indian Movement with both men playing the rhythm of the drums.

Although he feared a mafia mentality that could turn ugly, Frejo said he was at peace singing despite contempt. He felt briefly that something special was happening while they repeated the melody.

"They went from making fun of us and laughing to singing with us, I heard it three times," said Frejo. "That spirit moved through us, that drum, and slowly began to move through some of those young people."

Finally, a calm fell on the group of students and they separated and moved away.

State Rep. Ruth Buffalo, a state legislator from North Dakota and a member of the Mandan, Hidatsa and Arikara Nation, said she was saddened to see students who did not respect an elderly man who is also a United States military veteran. that was supposed to be a celebration of all cultures

"The behavior shown in that video is just a snapshot of what the Indians have faced and continue to face," Buffalo said.

Here is another video of these children harbading this Native American protester. Ignorance, fanaticism, is exasperating. This is not the future of this nation.

She said she hoped it would lead to some kind of meeting with the students to provide education about the problems that Native Americans face.

United States Representative Deb Haaland of New Mexico, who is a member of the Town of Laguna and had been at the rally earlier that day, used Twitter to sharply criticize what she called a "harrowing" exhibition of " flagrant hatred, disrespect, and intolerance. "

Haaland, who is also Catholic, told the AP that she was particularly sad to see the children mocking an old man, who is revered in the Native American culture. She blamed President Donald Trump, who has used Indian names like Pocahontas as an insult.

"It is sad that we have a president who uses the names of Native American women as racial slurs, and that is an example that these children are clearly following considering the fact that they were wearing their hats & # 39; Make America Great Again & # 39 ; ", said Haaland. "It has really brought out the worst in people."