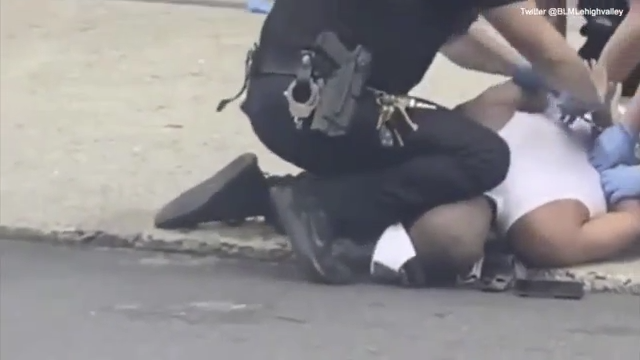 ALLENTOWN, Pa. | Allentown police are responding to a viral video that shows a police officer kneeling over a man while holding him outside the hospital.

The video has sparked outrage on social media, sparked a protest Saturday night, and has been receiving national attention.

Now the police are discussing the circumstances that led to the man being restricted.

According to a press release sent by Allentown police on Sunday night, officers were on the Sacred Heart Campus of Saint Luke’s Hospital in the 400 block of West Chew Street for an unrelated matter when officers observed a man outside who was vomiting and staggering.

Police said the man was escorted to the hospital for treatment. He was treated and then released, police said.

Shortly after the incident, a video posted on social media shows that the restrained man went viral.

The video, taken from a cell phone of an unknown car, shows three officers arresting the man. An officer appears to be using his arm and elbow on the man’s back to hold him, before pressing his knee to the man’s head.

Later Saturday night, a group of more than 100 people marched from the memorial at Seventh and Hamilton Streets to the Allentown Police Department demanding answers and asking what actions were being taken.

People were seen singing “without justice, without peace” and “dismissing the police.”

“It’s puzzling to me that they don’t feel like they’re under a microscope like police officers,” Maegan Llerena, executive director of Make the Road PA, said during the protest Saturday night. “After George Floyd happened, after people still demand justice for Breonna Taylor, Tony McDade, etc., etc., they would not feel that there is pressure on them.”

When O’Connell was asked for his opinion on the video, he said, “When I see it, I think it is disturbing. I think we have to gather all the facts and information before moving on.”

“Let’s take a look at it,” Granitz replied to protesters on Saturday night. “We will go through everything and give you an update as soon as we can.”

Earlier this month, the Allentown Police Department launched a new policy of excessive force. The policy prohibits neck restraints or restraints unless officials are avoiding “imminent death or serious bodily injury” to a citizen or themselves, which is why protesters said they question the need for such neck force in this case.

The NAACP Allentown Branch released a statement Sunday night about the incident.

“We found the video disturbing and disturbing,” according to the statement. “The NAACP Allentown has been in contact with the Allentown Police Department. They have assured us that a thorough investigation is ongoing. Once these components of the investigation are completed, we will have an opportunity to continue discussing the issues with the Police department”.

As the Allentown Police Department works through its new police policy protocols, we want them to ensure that they are acting with integrity that shows respect and safety for their citizens, “according to the statement.

The Lehigh County District Attorney will issue a statement when her review is complete, anticipated later this week. The district attorney has assigned two county detectives to the investigation, according to police.

The Allentown police press release concluded with the following information: “The investigation into this incident is proceeding rapidly. Part of the investigation has included reviewing a 23-second video posted on social media. Although significant, the entirety of the interaction is being reviewed. Witnesses are being interviewed and additional videos of the interaction are being reviewed. We plan to post relevant videos later this week as we complete this investigation. “