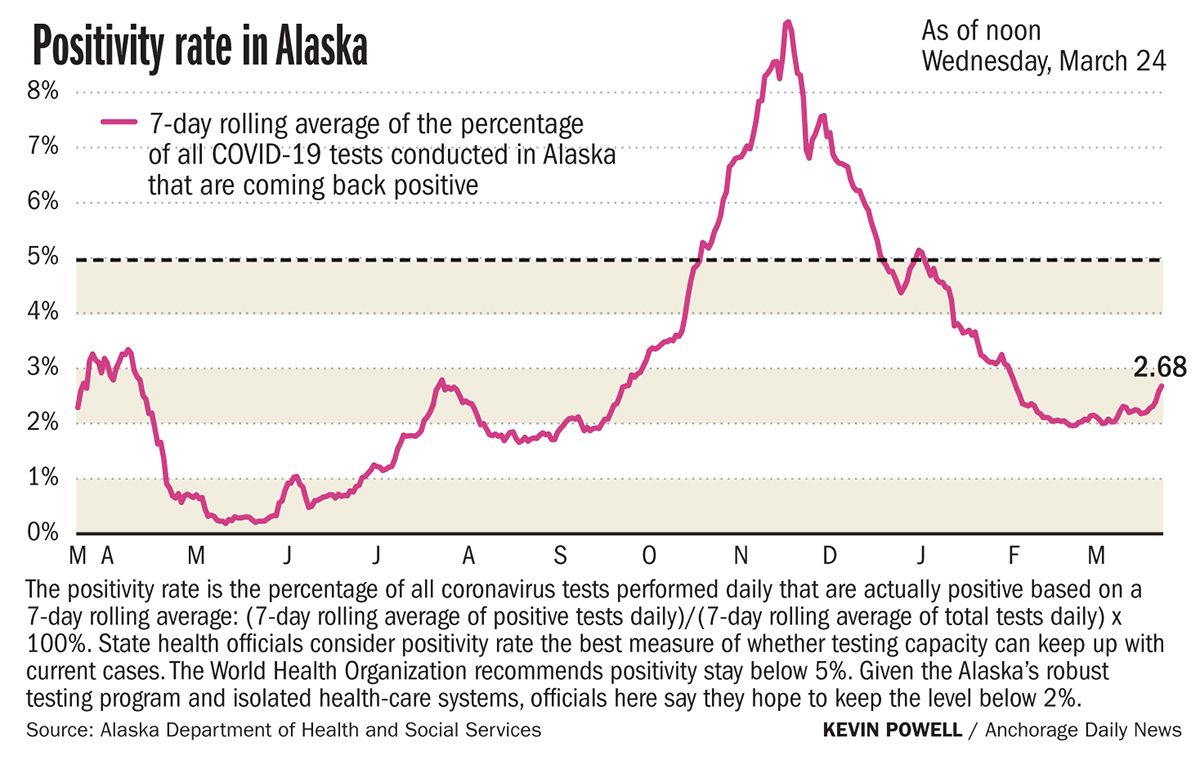 “What we’re seeing recently is just a small increase in cases,” said Dr. Joe McLaughlin, an epidemiologist with the state health department, during a weekly public information session Wednesday. “It’s not huge, it’s not precipitous, but it’s starting to trend upward,” he said.

He and other public health officials continue to encourage Alaskans to keep up with personal virus mitigation efforts, such as washing hands, wearing masks, social distancing, and getting vaccinated against COVID-19.

Alaska this month became the first state in the country to open vaccine eligibility to anyone 16 and older who lives or works in the state. You can now visit covidvax.alaska.gov or call 907-646-3322 to sign up for a vaccination appointment; New appointments are added periodically. The hotline is staffed from 9 am to 6:30 pm Monday through Friday and from 9 am to 4:30 pm on weekends.

By Wednesday, 235,452 people, including more than 38% of Alaska residents eligible for a vaccine, had received at least their first dose, according to the state’s vaccine control panel. At least 157,816 The people, about 27% of Alaskans age 16 and older, were considered fully vaccinated.

As of Wednesday, there were 36 people with COVID-19 in hospitals across the state, well below the peak at the end of 2020. Other patient had pending test results.

Of the 207 cases identified among Alaska residents on Wednesday, there were 100 in Anchorage, plus six in Chugiak and six in Eagle River; one in Valdez; three in Kenai; one in Soldotna; one in Healy; two in Fairbanks plus four in the North Pole; three at Delta Junction; one in Big Lake; one in Houston; 11 in Palmer; 35 in Wasilla; one in Willow; three in Juneau; one in Wrangell; one in Unalaska; and one at Bethel.

Among the communities of fewer than 1,000 residents that are not named to protect privacy, there was one in the Matanuska-Susitna district and 24 in the Bethel census tract.

There were also three new nonresident cases: one in Anchorage, one in Fairbanks and one in an unidentified region of the state.

The mean percentage of daily positive tests during the last week was 2.45%.