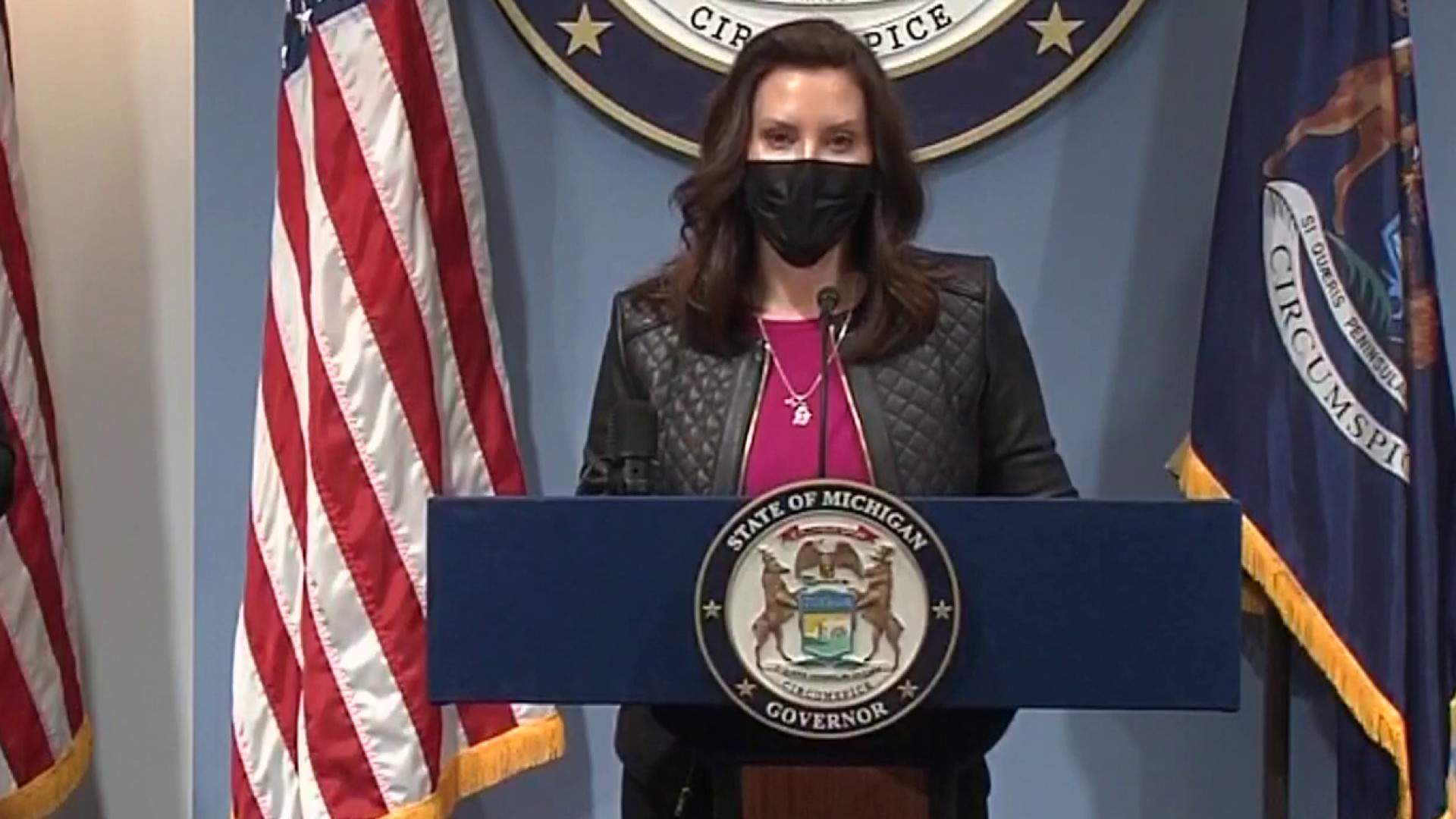 Here are our findings from the briefing..

the Michigan Department of Health and Human Services updated its COVID-19 order to allow up to 20% capacity in outdoor stadiums and arenas with infection control plans. They must also have fixed seats.

Stadiums must create a plan, submit the plan to health officials at least one week before events, publish that plan publicly, and administer a testing program for all players.

The state announced an increase in testing for young athletes ages 13-19 to ensure they can safely participate in sports.

More information about the program is available at Michigan.gov/Coronavirus website.

This is in response to an increased number of COVID-19 outbreaks associated with youth sports, Dr. Joneigh Khaldun, from MDHHS, said.

The new rules go into effect Monday (March 22) and last until April 19.

Michigan has administered 3,310,162 doses of the COVID-19 vaccines, according to Whitmer.

“More than 3.2 million doses of safe and effective COVID vaccines have been administered in Michigan, and we are on track to vaccinate 70% of Michiganians 16 years of age and older,” he said Dr. Joneigh Khaldun, executive medical director and deputy director of health at MDHHS. “While we are still struggling hard against this pandemic and seeing worrying trends in new cases and hospitalizations, we are taking these incremental steps that align with CDC guidance. We are again at a crucial moment in our fight against COVID-19 ”.

Whitmer said that more than 25% of Michiganians age 16 and older have received vaccinations.

For the next eight weeks, Ford Field will house about 6,000 residents per day to administer vaccines.

The governor said that many of the recent COVID-19 cases in the state have been linked to high school athletics.

“High school student athletes will now be required to be tested prior to all sports practices and competitions,” Whitmer said.

Khaldun said the number of outbreaks in the state increased 9% from the previous week, to 645.

“Last week, for the first time since we started tracking outbreaks, those in K-12 settings outnumbered in long-term care facilities,” Khaldun said.

She said that many of the outbreaks are associated with sports and people in younger age groups. Local health departments identified 315 outbreaks associated with recreational sports teams and clubs over the past two months, Khaldun said.

According to guidelines from the Centers for Disease Control and Prevention, Michigan will now allow residents who are fully vaccinated against COVID-19 to remove their masks in certain cases at meetings.

“Vaccinated people can remove their masks at residential gatherings if all participants have been vaccinated,” Whitmer said.

To remove the masks under the new rules, the gathering must be residential and all attendees must have received both doses of their COVID-19 vaccines or the single-dose Johnson & Johnson vaccine.

“That means two weeks after receiving the final dose of the COVID-19 vaccine,” Khaldun said.

Michigan has confirmed at least 756 cases of the B117 COVID-19 variant, Whitmer announced. This variant, which was first identified in the UK, is more contagious than the original strand of the virus.

Whitmer said Michigan has the second highest number of confirmed B117 cases in the country, behind only Florida.

Michigan tracks these variant cases through genetic sequencing in laboratories.

The case rate increased 77% since mid-February, but well below the peak of 737.8 cases per million people on November 14.

“The cases have increased since the end of February,” Whitmer said. “Fortunately, deaths have remained low, and on Wednesday, we had zero new deaths reported for the first time in months, which is excellent news.”

The percentage of COVID tests that test positive in Michigan has also increased for four weeks in a row and is now 6.2%.

Michigan’s positivity percentage has risen 177% from the mid-February low, but is not yet anywhere near the December high of 19.4%.

The percentage of hospital beds dedicated to COVID-19 patients statewide is 4.9%. Hospitalization peaked at 19.6% on December 4, but Friday’s figure is a 25% increase from the end of February.

Khaldun said the COVID-19 metrics above are very concerning and show Michigan is heading in the wrong direction once again.

“What we are seeing now is very worrying data showing that we are going in the wrong direction with the key metrics that we are tracking for COVID-19,” Khaldun said.

Khaldun said that just because something is allowed under the new MDHHS guidelines, it doesn’t mean the action comes without risk.

The first question during Whitmer’s Q&A was about former MDHHS director Robert Gordon.

This week, the state and Gordon lifted the confidentiality agreement that prevented him from discussing his abrupt resignation.

Whitmer was asked about the rationale for ditching that nondisclosure agreement, which was widely criticized and even labeled “secret money” by Republican lawmakers.

“The conversation around transparency is important and we have nothing to hide,” said Whitmer. “We released the former head of the deal and waived the deal for the sake of greater transparency.”

The governor said she will stay focused on the global pandemic going forward.

Due to the outbreaks associated with youth sports and high school athletics, Whitmer was asked if the state has considered shutting down those activities as cases increase overall.

“At this time, we are not announcing any restrictions,” Whitmer said. “We have no plans to do this at this time.”

She said Michigan has the tools to fight the virus: masks, social distancing, vaccinations and hand washing.

Whitmer said officials knew when they reopened more of the state that there would be an increased risk of the spread of COVID-19.

“We’re going to watch it closely, because these variants are very concerning,” Whitmer said.

He said that as long as everyone does their part, the segments of the economy that have participated again can remain open.

The final question to Whitmer during the briefing focused on his nursing home policy that places positive COVID-19 patients in nursing homes with people who did not have the virus.

“Governor, do you think that when the COVID elderly were transferred from hospitals to nursing homes, that resulted in the death of residents who did not have the disease?” They Asked.

Whitmer said the nature of COVID-19 is that it targets older people and spreads easily in congregated settings.

He also said that we have learned a lot about the virus since the beginning of the pandemic.

“At first, we had no idea that a mask was going to be the single most important tool that each of us could easily adorn to protect ourselves and our communities from COVID-19,” Whitmer said. “We have learnt a lot. Now, our nursing home policy, I know a lot of people have tried to rewrite it. But in fact, the nursing home policy was this: We follow the CDC guidelines. “

She said the state never ordered a nursing home to return patients to its care.