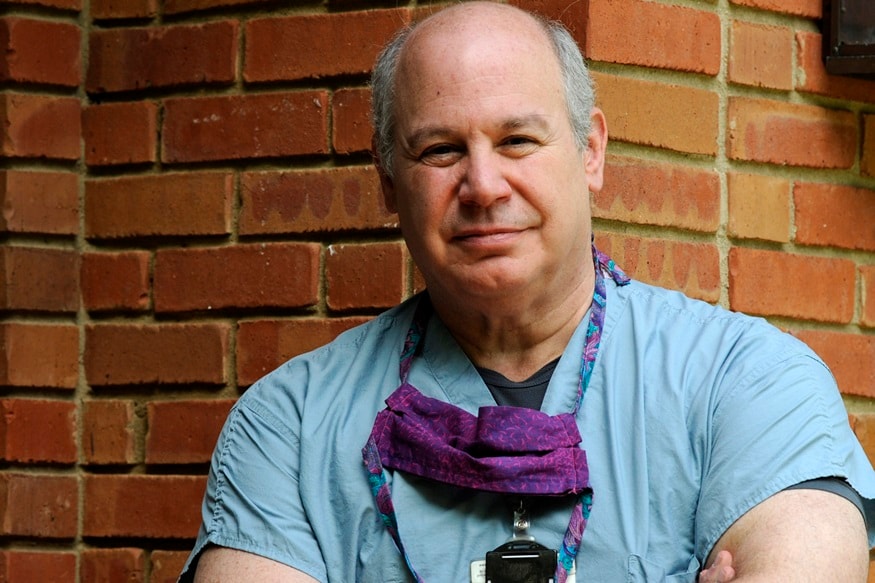 Dr. Michael Sag, who survived COVID-19 and now treats patients with the disease, poses for a portrait on Friday July 10, 2020 at his home in Mountain Brook, Ala. (AP photo / Jay Reeves)

Confirmed cases of COVID-19 have increased an average of more than 1,500 a day in Alabama compared to the previous week, a total of more than 62,100 since the epidemic began in March.

Dr. Michael Sag spends most of his time treating patients fighting for his life and working with colleagues who are overwhelmed and tired of the relentless fight against the COVID-19 epidemic.

But he enters a different world when he walks out the door to his Alabama clinic: one where many people don’t wear masks, keep their distance from others or even in the face of intense struggle against a virus Are aware, which has cost hundreds of thousands of lives nationwide and so many – including doctors – seriously ill.

The disconnect is destructive.

Saag said, “It’s a mixture of emotions, ranging from anger to despair, disappointment to despair.”

Confirmed cases of COVID-19 have increased an average of more than 1,500 a day in Alabama compared to the previous week, a total of more than 62,100 since the epidemic began in March. At least 1,230 people have died and health officials say less than 15% of the state’s intensive care beds are available for new patients. Some hospitals are completely out of room.

This is not just an Alabama problem. About 250 miles (400 kilometers) from Birmingham, Drs. Chad Dowell warned that his hospital in the small Indola of Mississippi is filling up and so others are making it difficult for sick patients to locate beds, as people debate on social media whether the epidemic is real.

Inside the hospital at the University of Alabama at Birmingham, doctors and nurses in protective gear from one emergency to another. They struggle to comfortably break heartbroken visitors who force relatives to say goodbye over long distances via cellphone, Saag said, all coping with the strain of whether they would be infected next.

The sharp increase in confirmed virus cases in Alabama has reopened restaurants, bars, theaters, gyms, sports leagues and churches that closed when the virus first hit. Although most are open at low capacity and with restrictions in place, many patrons are not following recommended precautions.

In metro Birmingham, where greens live, it is common to see less than half the people wearing masks inside shops. The doctor said he recently disputed after being stopped by a restaurant on the way home from work to take takeout orders for sushi. He said there were 60 people inside.

“I and one other person were the only two people who were wearing masks. And everyone, not only were they wearing masks, they were congregating together,” he said. And they see me that I am wearing some kind of pariah. A mask. ”

In response, Gov. Kay Ivey this week ordered all Alabama residents 6 and older to wear masks when in public and within 6 feet (2 meters) of someone’s relative. Cast against an epidemic that has become increasingly political, the move praised the duo as a potentially life-saving move and harshly criticized those who called it unnecessary opposition to freedom.

Sag said he hopes this order helps, but it all depends on compliance. Ivey said the rule would be harder to enforce, and some police and sheriff’s offices said they would not even try.

During the initial outbreak, doctors and nurses were honored as heroes in the fight against COVID-19. Some people say that they now feel like cannon fodder in war which has become increasingly divisive.

“People consider the virus as a political scheme or conspiracy theory. People continue to ignore the recommended guidelines to help slow the spread of the virus. People keep complaining about wearing masks. We’ve gotten to do better as a community, “Dowell, a Mississippi doctor, wrote in a Facebook message released by South Sunflower County Hospital.

For Saag, the fight is personal. In early March, both he and his adult son came down with the virus after a trip to Manhattan when the epidemic erupted there. Cough came first, followed by fever, headache, body aches and what Sag described as “fuzzy thinking”, or inability to concentrate.

“In the morning I would feel fine, thought I was done with it. And then every night it came right back up as if it was just starting again,” he said. “The hardest part of the night was breathing. There was a feeling of discomfort and did not know that it was going to go bad. ”

During eight suffocating nights, Sag was not sure if he would survive without a ventilator. It never came to that. He is now fully recovered and feels closer with people than ever before.

“When I talk to a patient and I say, ‘Hey, I have too, it’s like we’re connected in a way that I’ve never really, honestly, felt with patients before – And I have been doing this 40 years, ”Saag said.

Outside the exam hall, Sag attended news conferences and did media interviews to encourage basic public health practices, but he knows that many people are just not listening.

He said it is disheartening to see widespread disregard for security measures and concerns about the future of Alabama when the virus remains a greater threat than ever before.

“I’m just thinking, ‘Oh, my goodness. We’re about to get into trouble soon.’