After fierce storm, more than half a million customers around New England still in the dark

A day after powerful winds and rain ripped through New England, downing trees and power lines, utilities had made progress restoring power to homes across the region, but nearly 95,000 Mbadachusetts customers remained without power Tuesday afternoon, along with more than 362,000 in Maine and 118,000 in New Hampshire.

Utility officials throughout the region cautioned that restoring power will be a multi-day effort, given the breadth of damage, and said the initial focus will be on repairing transmission lines because they will turn the lights on the for the largest number of customers.

But according to the National Weather Service, conditions will favor the utility crews. “Plenty of sunshine will result in high temps today mainly in the middle to upper 50s despite gusty winds,’’ forecasters wrote Tuesday.

Get Fast Forward in your inbox:

Forget yesterday’s news. Get what you need today in this early-morning email.

In Maine, the process of restoring power was slower, with just over 300,000 Central Maine Power customers without electricity Tuesday afternoon. But that number was down from the more than 400,000 Central Maine customers that went dark at the peak of the storm on Monday. An additional 62,000 customers also remained in the dark.

Portland Public Schools cancelled clbades Tuesday at five schools that were still without power, and city officials advised families to use caution when trick-or-treating Tuesday night.

“We’ve really been trying to caution people that, if they do go out, to be extra aware of debris, trees, power lines, to not trick-or-treat on streets with no power . . . and to hopefully trick-or-treat on the earlier side,” said Jessica Grondin, a spokeswoman for the city.

About 15,000 electric customers in Portland were still without power Tuesday morning, and several homes had been affected by small fires caused by downed trees on Monday, according to Grondin.

Crews from the city’s Public Works and Parks, Recreation, and Facilities departments were still trying to reach about 160 locations where trees needed to be removed, including a dozen sites where the trees were in contact with electric wires that would need to be handled by utility companies, Grondin said.

Grondin said city officials were working with the Cumberland County Emergency Management Agency to determine whether it would be necessary to open a shelter for residents, as the overnight temperature in Portland was expected to drop to the freezing mark on Tuesday night, according to the National Weather Service. 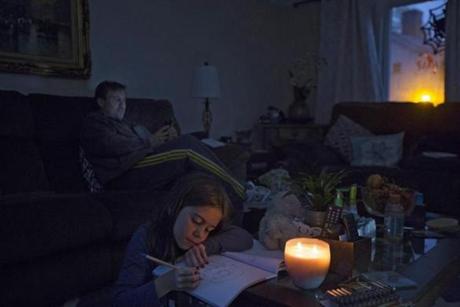 Emily Samways, 7, colored by candlelight as utility workers worked to restore power to her Wilmington home Monday and her father, Mark, called the phone company about service.

So far, she said, there didn’t appear to be a demand for shelters, likely because residents sought help from family and friends.

Grondin’s own home was affected by the blackout, she said, and her family spent Monday night in a hotel. On Tuesday, her daughter’s elementary school was among those closed for a second day because it lacked electricity — using up another “snow day” well before the start of winter.

At Bowdoin College in Brunswick, Maine, the administration called only for library staff and essential personnel to report to work, and said professors could teach at their discretion. The library and dining halls remained open, but academic buildings were without power or internet access.

The college posted a photo on Instagram Monday night showing students huddled around their laptop computers in the Thorne Dining Hall, taking advantage of the building’s electricity and online access.

At the University of Maine in Orono, clbades were cancelled and the Fogler Library was closed on Tuesday, according to an alert the university posted online. Power had been restored to residence halls by Tuesday morning, but other campus buildings were still dark, the alert said.

A Red Cross emergency shelter was open at the university’s Field House, and both that facility and the Memorial Union were available to students living in fraternity and sorority buildings and off-campus student apartments.

In New Hampshire, more than 93,000 Eversource customers were still without electricity Tuesday afternoon, and about 25,000 households served by the New Hampshire Energy Cooperative remained dark.

The Planet Fitness chain announced that all of its 16 New Hampshire facilities will be open for free to anyone in that state needing to use its showers, electrical outlets, and fitness equipment from Tuesday through Sunday.

“We have fully deployed town resources in order to ensure the public’s safety,” Andrew Flanagan, Andover’s town manager, said in a statement. “Our response has been comprehensive despite competing demands of services, and I am incredibly moved by the response we have received so far from town workers, residents, and business owners.”

Schools were also closed in Lawrence, though trick-or-treating was set to go on as planned from 5 to 7 p.m., according to online postings from city officials.

In Lowell, public schools were closed “due to safety issues related to downed power lines and obstructed roadways,” according to a Facebook posting from the School Department, and trick-or-treating was postponed until Friday.

John R. Ellement of the Globe staff contributed to this report. Jeremy C. Fox can be reached at [email protected] Follow him on Twitter @jeremycfox.