Acid reflux drugs could double your risk of stomach cancer

Acid reflux drugs that are supposed to prevent stomach cancer could double your risk of developing the potentially-fatal illness, according to a new study.

The report, published in the journal Gut, concluded that proton pump inhibitors (PPIs) significantly increase people’s risk of being diagnosed with gastrointestinal tumors, which are the third deadliest type.

PPIs such as Prilosec, Prevacid and Protonix are prescribed to wipe out a certain type of bacteria that is linked to the cancer.

But after this happens, if a person continues to take a PPI, their cancer risk surges, according to the research by the University of Hong Kong and University College London.

The study’s authors warn their findings show doctors should impose more limits on how many PPIs they prescribe, and for how long. 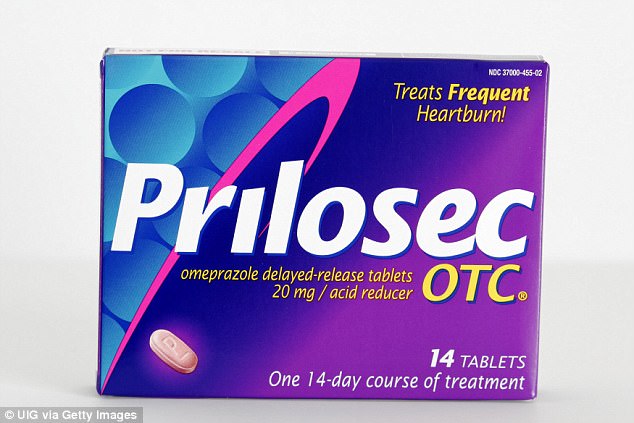 A new study has found that acid reflux drugs, such as Prilosec, might double one’s risk of developing stomach cancer (file photo)

Stomach cancer usually begins in cells that line the stomach and produce mucus.

The following are symptoms of stomach cancer:

You can decrease your risk of developing the cancer by:

The participants were monitored individually until they died, developed stomach cancer or the study ended in December 2015.

The average amount of time that participants were monitored was seven-and-a-half years.

Five percent of the participants – 3,271 people – took PPIs for an average of three years during the study, and 21,729 people took H2 blockers.

The researchers – from Queen Mary Hospital and the Department of Pharmacology and Pharmacy at the University of Hong Kong and University College London School of Pharmacy – found that taking PPIs significantly heightened one’s risk of developing cancer and that H2 blockers were safe.

Your risk parallels the frequency with which you take the drugs. Daily PPI usage more than quadrupled a person’s risk of developing stomach cancer.

The study’s authors wrote that doctors ‘should exercise caution when prescribing long-term PPIs’.

The American Cancer Society estimates that about 28,000 cases of stomach cancer will be diagnosed in the US this year. Additionally, they said it will probably kill about 10,960 people.

The society also said that the average risk of developing stomach cancer is one in 111. Most people diagnosed with the illness are at least 65 years old.

Men are impacted by stomach cancer more than women, and, in the US, Hispanic, black and Asian Americans are more likely to develop the cancer than white people.