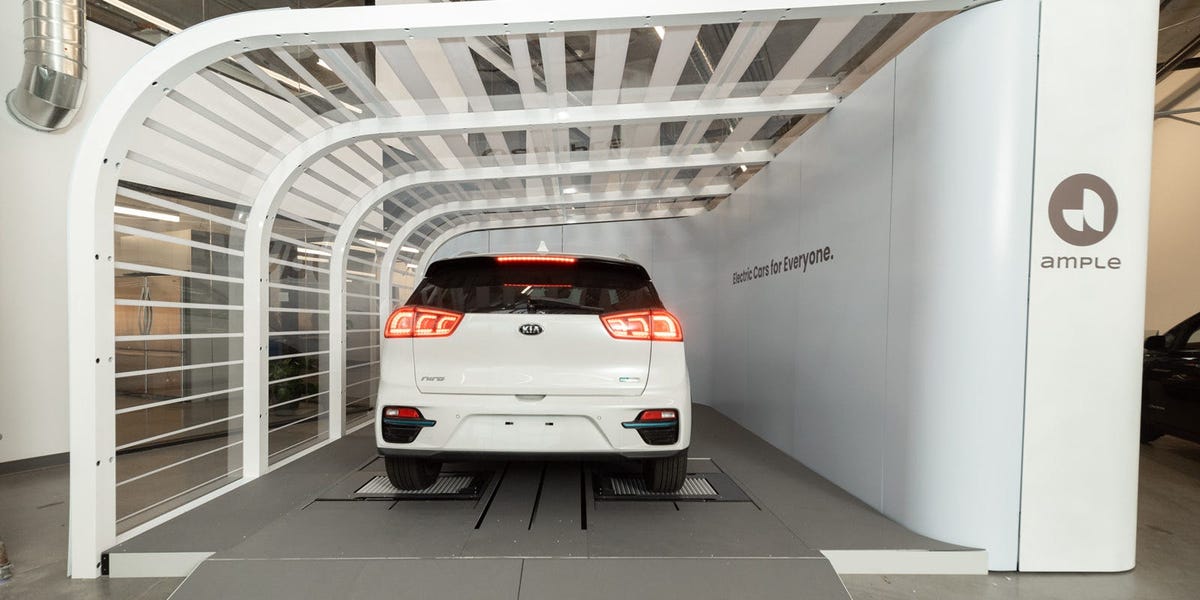 Ample, a San Francisco-based startup, has launched a charging network that can recharge an electric car in less than 10 minutes. The company went out of stealth mode on Wednesday.

The company started the initiative through a partnership with Uber and is funded by more than $ 70 million from private investors. The network currently charges Uber’s fleet of cars in San Francisco and is expected to hit the mainstream market in a couple of years.

Ample has already deployed two stations that are in full use in San Francisco for the Uber fleet and is working to deploy more stations in several other major California cities. The startup hopes to alleviate much of the anxiety of driving an electric car by making charging stations as fast and available as gas stations.

Unlike typical charging stations, which require the electric car to be plugged in and can take 45 minutes to 12 hours, Ample’s charging stations remove batteries from the car and replace them with freshly charged ones. The exhausted batteries are placed on the shelves at the station where they are recharged for future use.

The system is also completely autonomous. Customers will pay using an app system and don’t even need to get out of the car to charge the electric vehicle, according to Hassounah. The station automatically detects the vehicle and goes to work.

Ample president John de Souza said the company’s goal is to make electric cars as accessible as possible. For many drivers, the decision to switch from a combustion engine to an electric car is not feasible due to the hassle of long charging times and cars that cannot travel long distances without stopping to recharge.

“Electric cars shouldn’t have to be subsidized by the government or come at a huge personal cost,” de Souza told Insider. “It has to be more convenient than gas, so it becomes a no-brainer for people to say, ‘Why wouldn’t I change?’

The startup charges Uber fleet drivers per mile and offers its services for 10-20% less than the cost of gasoline. Hassounah said the battery’s modular system makes the process simpler and ultimately more economical. The full configuration also contributes to a more economical price, as it can be easily built in a parking lot.

“We could deploy an entire city in a matter of weeks,” Hassounah told Insider.

Self-contained battery exchange stations can be easily assembled or disassembled as they come in their own frames that can be quickly assembled into several large sections.

Changing the battery could increase the life of an electric car

The swapped batteries will use the longest-range technology available for each car to give drivers as many miles as possible between recharges.

Hassounah said the exchange system would also contribute to the longevity of the vehicle, as the car would no longer be limited by a dead battery, but would continually receive the newest battery chemistries.

Most electric vehicle batteries are insured for at least 100,000 miles, but lithium-ion batteries often get shorter and shorter ranges as they go. A new electric car battery costs several thousand dollars – for example, a Nissan Leaf battery replacement costs around $ 5,500, while a Chevy Bolt replacement costs more than $ 16,000, according to Car and Driver. Both cars have a range of around 250 miles.

The company is not the first to employ battery swap technology and faces competition from at least six startups with similar strategies.. In China, a leader in the electric car industry, the practice is much more common. The Chinese manufacturer Nio has had great success with the process in China.

Businesses have struggled with technology in the past

In 2013, Tesla CEO Elon Musk showcased the battery-swapping technology, only to reject the technology two years later in favor of focusing on the company’s supercharger stations. Musk called the technology “too expensive.”

Another Israel-based startup, Better Place, also invested in battery-swapping technology. Investors in the company lost more than $ 850 million because the idea failed.

The company could not find automakers willing to build vehicles with its technology and it was not financially sustainable to make enough different types of batteries to suit every type of electric car on the market.

Hassounah said Ample has learned from Better Place’s mistakes. The company’s modular battery is cheaper than Tesla’s attempt and will eventually fit any car, unlike Better Place’s battery swap method. Ample is in the process of working with five major automakers, according to Hassounah.

The company is also approaching charging stations differently. Extensive plans to use renewable energy sources to recharge batteries. The company captures wind and solar energy when it is available and delivers it to cars when necessary.

“Switching to electricity but continuing to burn fossil fuels is not solving the problem,” Hassounah told Insider. “We save the energy absorbed for peak hours and plan to charge the vast majority, if not all, with renewable energy without increasing the cost.”

Ultimately, Hassounah said the company hopes to help put a billion electric cars on the road.

“It’s not about changing the battery instead of charging it,” Hassounah told Insider. “We need all the solutions. We are all lined up to find different ways to solve the problem, and modular battery swapping is just another way to solve the bigger problem.”