The world’s first satellite to use magnets to collect space debris will launch tomorrow morning.

The spacecraft, called ELSA-d and manufactured by the Japanese firm Astroscale, will take off from Kazakhstan aboard a Russian Soyuz rocket at 6.07 am GMT on Saturday (March 20).

The 200 kg ship consists of two components that will perform a series of tests in space to test the ability to retrieve garbage with a magnetic mechanism.

Once the tests are complete, ELSA-d will burn up in Earth’s atmosphere, but the satellite will be crucial in informing future space cleanups.

The mission, authorized by the UK Space Agency, acts as a test case for licensing more missions to remove defunct spacecraft and debris fragments.

According to the European Space Agency (ESA), there are approximately 9,200 tonnes of space debris, defined as human-created objects that have been fragmented from spacecraft and are now floating aimlessly above Earth.

The UN has recognized the challenge of avoiding collisions between satellites and debris in space, and now satellites are made to drift off course to avoid a damaging impact in flight.

Saturday morning’s launch, which Astroscale says will mark the world’s first trade mission to “demonstrate the basic technologies required for docking and removal of space debris,” will be broadcast live.

“Pre-launch activities have been completed successfully, and ELSA-d is now integrated into the rocket and ready to demonstrate our technical capabilities to the world,” said Okada, who is also the current CEO of the company.

This landmark mission will also allow for better-informed policy developments and will drive the business case for in-orbit services such as end-of-life and active debris removal.

“This is an incredible moment, not just for our team, but for the entire satellite service industry as we work to mature the debris removal market and ensure the responsible use of our orbits.” 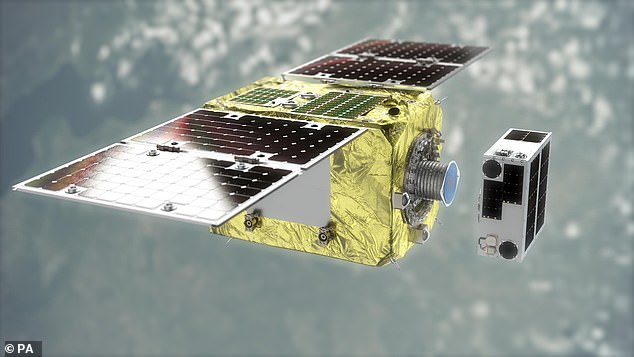 Tomorrow the world’s first mission will be launched to demonstrate how space debris can be removed from lower Earth orbit. ELSA-d consists of two spacecraft that will conduct a series of tests in space to test their ability to retrieve garbage with their magnetic mechanism.

The Astroscale founder previously told AFP that the density of space debris has reached a ‘critical level’ where collisions could occur at any moment.

“If we don’t take any action, the space is no longer sustainable,” he said. ‘So someone has to clean up the space.’

“A certain percentage of the satellites will disappear in space. And they have to be replenished with new satellites to maintain coverage.

“To do that, they have to remove the oldest satellites to make sure their orbital plane is clean.”

As part of the upcoming demonstration, two components will be launched into space together: a 180 kg service satellite to collect the debris and a 20 kg ‘client satellite’.

The smallest client satellite is a debris replica with a plate that allows it to engage with the manager’s magnetic mechanism as it approaches. 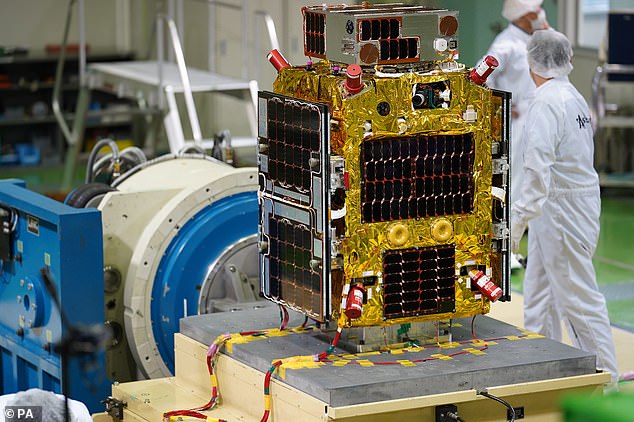 Close-up of the 180 kg servicer satellite, equipped with a magnetic capture mechanism, which will repeatedly release and dock with the ‘client’ spacecraft 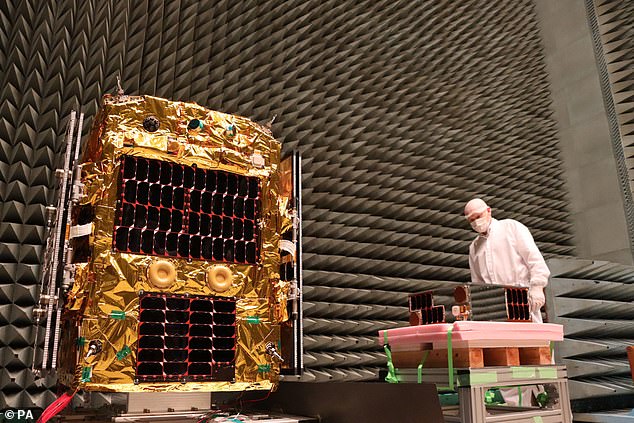 Astroscale intends to demonstrate the capabilities required for debris removal, including searching, inspecting and finding customers, and docking both no-tip and no-tip.

During the mission, the servicer will repeatedly drop and dock the client in a series of technical demonstrations, as a dummy test of how it would find and dock with defunct satellites and other debris.

Demonstrations include searching for the customer, inspecting and meeting them, and docking in “cartwheels” where the customer’s satellite is lost and falls, the manager has to catch up with it.

The main demonstration phases of the mission will be completed by the end of the year, at which point the decommissioning process will begin.

“ At the end of the mission, the ELSA-d spacecraft will begin a slow desorbitation phase, using the last of its thruster to responsibly avoid colliding with other debris in space, which will eventually burn out upon re-entry ” ‘John Auburn, managing director of Astroscale UK, told MailOnline.

“We are already working hard in the next phase of the program to recover multiple pieces of debris in a single mission, and we hope to launch this service by the end of 2023.”

ELSA-d, which is short for Astroscale End-of-Life Services by Demonstration, will be operated from the national facility at the Satellite Applications Catapult (SAC) on the Harwell campus in Oxfordshire.

“We will perform complex maneuvers to demonstrate the release and capture of this debris,” Auburn said. 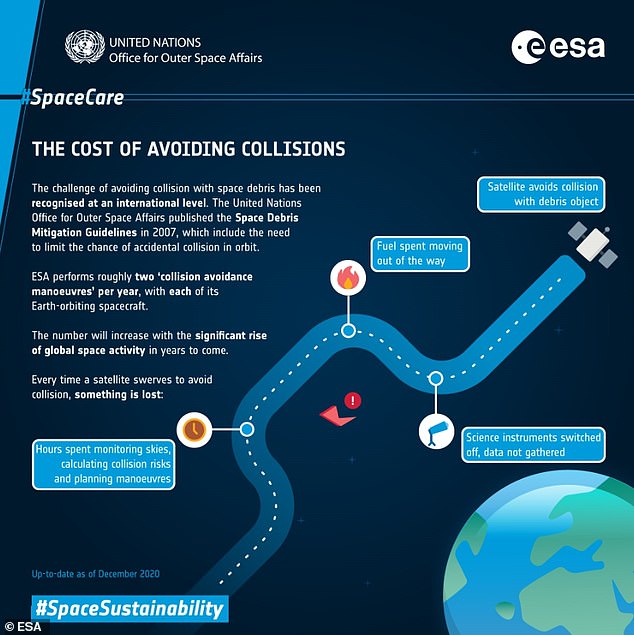 “This mission will pave the way for Astroscale to expand our commercial debris removal services for satellite providers and government partners.”

Auburn said it will be the first semi-autonomous robotic magnetic capture of a piece of debris falling through space.

However, the mission will use advanced software and autonomous control technology, rather than being completely under human control.

“These kinds of demonstrations have never been done in space before; they are very different from, say, an astronaut controlling a robotic arm on the International Space Station,” Astroscale UK’s Jason Forshaw told New Scientist.

With up to tens of thousands of satellites launched in the next few years, space debris endangers “a thriving ecosystem in space,” says Astroscale. 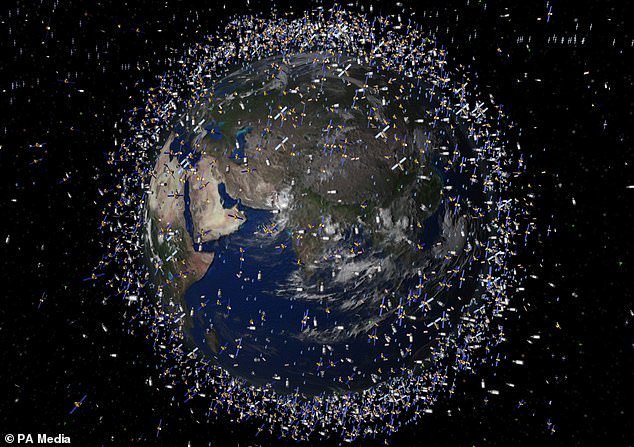 A collision with space debris could have a major impact on the satellite services that people rely on every day.

It is estimated that there have been more than 560 ruptures, explosions, collisions or anomalous events that resulted in fragmentation.

ESA conducts around two ‘collision avoidance maneuvers’ per year with each of its spacecraft in Earth orbit.

“ A collision with debris in space could have a major impact on the many satellite services that we rely on every day on Earth, from mobile phones to online banking, ” said Dr. Alice Bunn, International Director of the UK Space Agency, which approved the license. for launch earlier this month.

“The UK is taking a leading role in international efforts to clean up space debris as the largest investor in space safety for the European Space Agency,” said Dr Bunn.

“Astroscale’s exciting ELSA-d mission is the world’s first commercial demonstration debris removal mission and will show how we can make space safer for everyone.”

WHAT IS SPACE JUNK? MORE THAN 170 MILLION PIECES OF DEAD SATELLITES, SPENT ROCKETS AND PAINT FLAKES POSE A ‘THREAT’ TO THE SPACE INDUSTRY

There are an estimated 170 million pieces of so-called ‘space junk’, left over after missions that can be as large as spent rocket stages or as small as paint flakes, in orbit along with some US $ 700 billion ( £ 555 billion) of space infrastructure. .

But only 22,000 are tracked, and with the fragments capable of traveling at speeds in excess of 27,000 km / h (16,777 mph), even the smallest pieces could seriously damage or destroy satellites.

However, traditional gripping methods don’t work in space, as the suction cups don’t work in a vacuum and the temperatures are too cold for substances like tape and glue.

Magnet-based tweezers are useless because most debris orbiting the Earth is not magnetic.

Around 500,000 pieces of human-made debris (artist’s impression) currently orbit our planet, made up of disused satellites, pieces of spacecraft, and spent rockets.

Most of the proposed solutions, including debris harpoons, require or cause forceful interaction with debris, which could push those objects in unpredictable and unintended directions.

Scientists point to two events that have seriously worsened the space debris problem.

The first was in February 2009, when an Iridium telecommunications satellite and Kosmos-2251, a Russian military satellite, accidentally collided.

The second was in January 2007, when China tested an anti-satellite weapon on a former Fengyun weather satellite.

One is the low-Earth orbit used by satellite navigation satellites, the ISS, China’s manned missions, and the Hubble telescope, among others.

The other is in geostationary orbit and is used by communications, meteorology, and surveillance satellites that must maintain a fixed position relative to Earth.