A photo and its story: an American couple shoots protesters against racism with weapons

July 1, 2020 U.S. Comments Off on A photo and its story: an American couple shoots protesters against racism with weapons 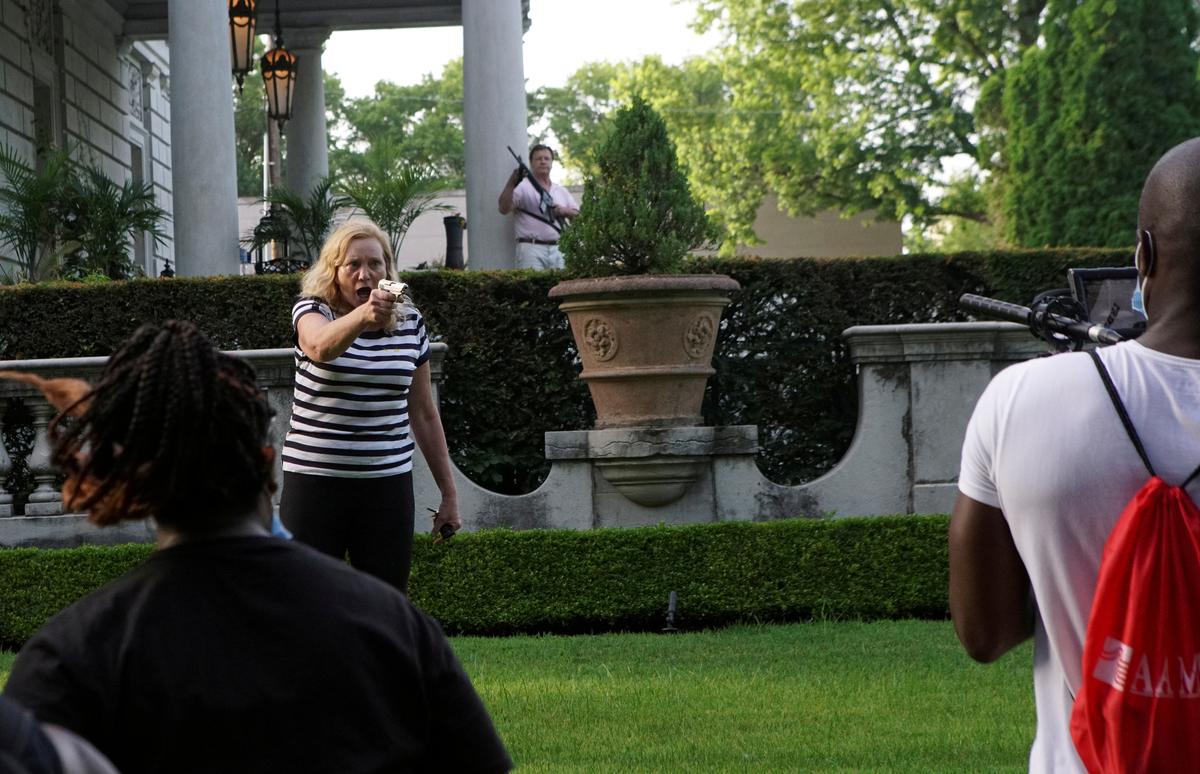 (Reuters) – For Reuters photographer Lawrence Bryant, last Sunday’s events in St. Louis, Missouri will keep him especially alert the next time he goes out to cover the anti-racism protests that are raging the United States.

Patricia McCloskey and husband Mark McCloskey point guns at protesters, including a man holding a video camera and microphone, as they enter their neighborhood during a protest against St. Louis Mayor Lyda Krewson in St. Louis, Missouri, United States, June 28. 2020. REUTERS / Lawrence Bryant

In a series of dramatic images, Bryant captured a couple leaving their mansion with firearms waving at the crowd, as they confronted protesters on their way to the mayor’s house to demand their resignation.

The images, shot at close range, have been featured prominently on news websites and in newspapers since they were taken.

Bryant, 45, recalled that on Sunday afternoon several hundred black and white protesters entered through an open door to the community where the couple, Mark McCloskey and his wife Patricia McCloskey, live.

They were greeted by Mark McCloskey holding what looked like an automatic rifle and shouting “Get out!” several times to the crowd. In the photographs and videos of the incident, he was wearing a pink shirt, beige pants and his feet were bare.

With places to shelter, Bryant said he was not overly concerned at the time, even as the man appeared to be aiming his gun.

Then Patricia McCloskey appeared from the front of the house with a pistol. Bryant quickly became more concerned.

“She had her finger on the trigger and she looked nervous and I got a little bit more worried, since there were children and she sporadically pointed the gun at random people,” she recalled.

“I was just trying to make frames. Trying to stay safe, trying to dodge the barrel of the gun and stay out of sight and offline. I’m a great black man and I always have to pay attention to that anyway. ”

The McCloskeys have said they feared for their lives on Sunday and that protesters damaged a wrought-iron gate at an entrance to the wealthy neighborhood.

“His actions were based solely on fear and apprehension, the genesis of which was unrelated to race. In fact, the agitators responsible for the concern were targets, “his lawyer said in a statement sent to Reuters.

“The McCloskeys want to make sure that no one thinks less of the Black Lives Matter (protest movement), his message, and the media he is using to spread his message because of the actions of a few white individuals who tarnished a peaceful protest.”

Calls to the couple’s phone numbers were unanswered, and her lawyer declined to make them available for an interview.

Kimberly Gardner, the city’s attorney general, said she was alarmed by the videos and that her office was investigating.

“We must protect the right to protest peacefully, and any attempt to cool it down by intimidation or the threat of lethal force will not be tolerated,” it said in a statement.

The St. Louis confrontation has taken on additional importance after President Donald Trump, who has already been accused by critics of stoking racial tensions in the United States, retweeted an ABC News video of the incident. He made no comment.

Bryant said he was satisfied with the photos he took.

On the one hand, he would have liked a longer lens to be able to get closer to men and women. On the other hand, the fact that he only had a camera with him meant that he captured not only the McCloskeys, but also the protesters around him.

“A lot of the photos focus on them holding weapons, but for me that doesn’t tell the whole story,” he said.

“I wanted to show that there were people protesting peacefully and they came to involve them.”