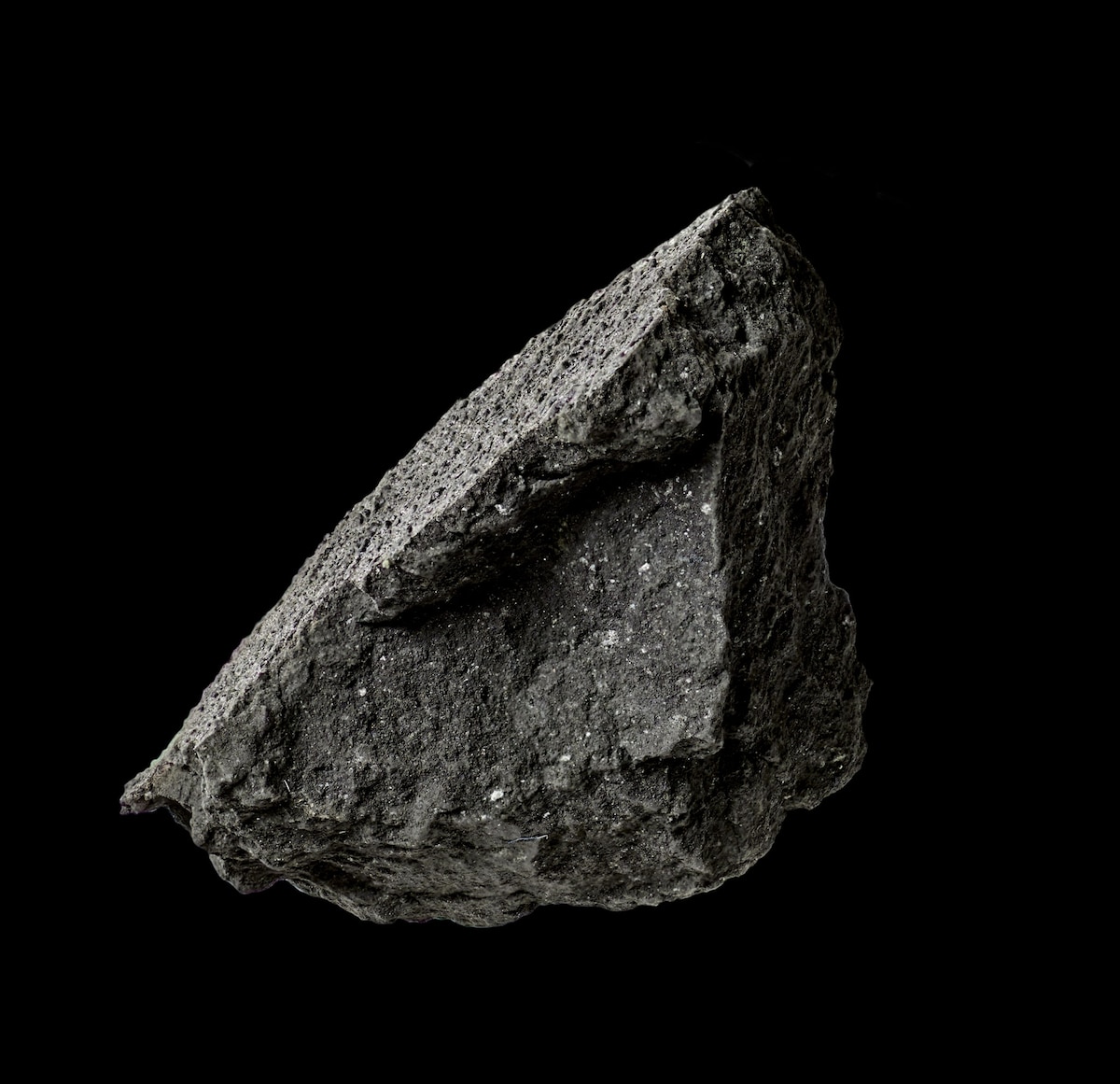 On the night of February 28, a rocky fragment fell from the sky and illuminated the atmosphere over England. The impressive fireball was captured by an international network of meteor tracking cameras and scientists were dispatched to the quiet town of Winchcombe. A chunk of the meteorite was found in a driveway, while another was discovered in a field littered with sheep droppings.

Around 18 ounces of space rock have been found so far, all of which was quickly turned over to a few selected scientific institutions, primarily the Natural History Museum in London, for preliminary analysis. The rapid transport of the samples to the labs was crucial in ensuring that the Earth’s environment did not significantly alter the chemistry of these nearly pristine materials from space.

It turns out that the meteorite, the first found in the UK in 30 years, is a fairly rare type known as a carbonaceous chondrite. These ancient fragments contain not only the building blocks of planets, but also compounds that can help explain how Earth got its water or even provide clues to how life began.

“It’s like the kind of magical meteorite that fascinates a lot of people,” says Katherine Joy, a meteorite expert at the University of Manchester.

Interestingly, at first glance, the chemistry, minerals, and textures of the meteorite do not appear to belong to any kind of carbonaceous chondrite. Each of the fragments studied so far appears to be slightly different from the others.

Scientific work on what will likely be known as the Winchcombe meteorite has just begun. But the meteor’s rarity, combined with the speed with which it recovered, has caused the meteor community to explode with glee.

“We’ve all gone crazy,” says Sara Russell, a planetary scientist at the Natural History Museum in London. “For our group of meteorites, it is the most important acquisition, I would say, ever.”

Time capsules from above

Meteorites collide with Earth all the time, but most are not large enough to be announced with a fireball. Even when they do, many fall into the oceans. The vast majority of collected meteorites are found in deserts, particularly in the cold desert of Antarctica, a large expanse where conveyor belt-shaped ice flows deposit space debris in specific areas, and the white tones of the continent allow them to black meteorites stand out easily.

The UK is small, so meteorites don’t hit the islands often, and it’s full of cities and greenery, making meteorites hard to find. But, from time to time, space rocks accidentally fall right in front of people’s noses. On Christmas Eve 1964, a meteor “bounced off a driveway, through someone’s window and landed under their Christmas tree,” says Matthew Genge, a meteorite expert at Imperial College London.

In recent years, meteorite hunters in the UK have improved their odds by installing cameras designed to spy on fireballs, which are used to find out where fragments fall to Earth. Over the last decade, six different networks of sky-facing cameras, managed by amateur and professional researchers, have been integrated into the UK Fireball Alliance.

These cameras “are pointing to the sky all the time,” always recording, looking for any flash or noticeable object that crosses the sky, says Jim Rowe, the group’s organizer. During the pandemic, he wrote computer code that ensured that these individual networks could communicate with each other to track any objects that fell from above.

The system has captured occasional fireballs over the past five years, but the impact sites were not suitable for collection. A few years ago, “there was a fireball that hurled a meteor directly into the North Sea,” says Daly, without knowing the surrounding lands of the UK, northern Europe or Norway, where it could have been recovered.

In late February, after years of watching and waiting, a six-second fireball was caught spewing meteorite fragments across Gloucestershire, a county in south-west England. The trajectory was immediately analyzed by a team of international researchers working with the UK Fireball Alliance, the possible impact zone was determined and experts from across England landed on the town of Winchcombe and the surrounding region.

After a few days of looking around, the scientists notified the local press and asked the public to help them find any strange-looking rock fragments. People across the country sent countless photos of possible fragments to the experts.

A family woke up to find fragments of black rock and splatters of soot in the driveway. After hearing reports of a fireball, they quickly realized the debris was meteorite and contacted the UK Meteor Observing Network. Just 12 hours after impact, a large portion of the meteorite had already been packed up, ready to be collected by experts.

“How generous, recognizing how important this is to science and wanting to contribute to that,” says Joy.

Daly and his girlfriend Mira Ihasz joined a group combing a nearby field littered with sheep droppings. When a rock passes through Earth’s atmosphere, the material melts and then hardens into a black shell, and the dark tones of sheep dung inconveniently resemble the scorched crust of meteorites.

“Another promising poop, as we started calling it,” says Daly. But after five days of searching, Ihasz stumbled upon the real deal.

The fragment was found 1,300 feet from where the models said the fragments should have fallen, a remarkable degree of precision, but not accurate enough for the modelers, who Daly said expressed some disappointment that their prediction was not more accurate.

‘A ball of mud from the start’

The exact origin of most meteorites remains a mystery. But thanks to the well-documented ground trajectory of the Winchcombe meteorite, it was traced to the outer edge of the asteroid belt, between Mars and Jupiter.

“Knowing where this came from and what it is is very special,” says Joy. This knowledge makes it easier to determine what type of asteroid the meteorite broke off from, and it also helps scientists better understand the kinds of disturbances in space that can cause rocks to rush toward us.

Although the Winchcombe meteorite shows characteristics of multiple types of carbonaceous chondrites, meaning this could be something entirely new, initial chemical analysis identified it as a CM type. These meteorites contain (among other things) abundant minerals that contain water.

“It’s a ball of mud from the beginning,” says Genge of Imperial College London. Only 652 of them have been found.

Compared to most other types of meteorites, CM chondrites “are incredibly delicate,” says Daly. The minerals inside break down quickly in Earth’s humid atmosphere, so if they’re left exposed to the elements for a long time, “these things just turn to dust.”

“The fact that it is so fragile and delicate, and the fact that it was compiled so quickly, was critical,” says Joy. “This was bagged up and returned to the museum within 36, 48 hours after it was dropped, which just doesn’t happen very often.” The rapid recovery means that its ingredients have been almost perfectly preserved, and they will have much to reveal about the early solar system and the lush planet we live on today.

Secrets of Earth and space

A hidden secret in rocks like the Winchcombe meteorite has to do with how the Earth obtained such large amounts of water. The giant impact with our planet that led to the formation of the moon about 4.5 billion years ago likely removed much of the water that Earth started with.

Whether the surface water we have today came primarily from within the planet and escaped through volcanic eruptions, or whether it was delivered primarily by soggy asteroids is a matter of debate. By studying the hydrated minerals in carbonaceous chondrites, Russell says, we can discover what process filled the oceans of our modern world.

CM chondrites also generally contain many different organic molecules, including amino acids and sugars, and this meteorite is expected to be no different. The asteroids that bombarded the early Earth would have brought this organic matter with them, perhaps depositing the materials necessary for the first living organisms to form.

“That organic chemistry may well have accelerated the origins of life on Earth,” Genge says.

Meteorites can also tell us about the time before Earth was formed. The Winchcombe meteorite contains features known as calcium-aluminum-rich inclusions, or CAI. “They are the oldest solids in the solar system, which of course is the most amazing and cool thing,” says Russell.

The chemistry of the CAIs suggests that they all formed at the same time and in the same place, 4.56 billion years ago, right next to the sun, before ending up embedded in rocky material that clumped together in the cold recesses of the outer solar system. The dramatic outward journey of this material is not easy to explain, but gathering more CAI will help unravel how matter moved and mixed as planets formed and the solar system evolved into its modern form.

CM chondrites also often contain substances like graphite and diamond grains that are remarkably older than the solar system itself. Their chemistry is so different from anything found within our solar system that scientists believe they came from atmospheres of giant stars or formed in supernova explosions before moving into our still-forming cosmic neighborhood.

These grains were “thrown into the universe, floating for hundreds of millions of years and then collapsing inward to form our solar system,” Genge says. While these primordial gems have yet to be identified in the Winchcombe meteorite, scientists hope that, like other CM chondrites, it contains pre-solar system grains.

Thus, the Winchcombe meteorite could contain not only clues to the history of our neighborhood around the sun, but also the ghosts of other planetary systems lost to time, and the international effort to decode its many secrets has only just begun.