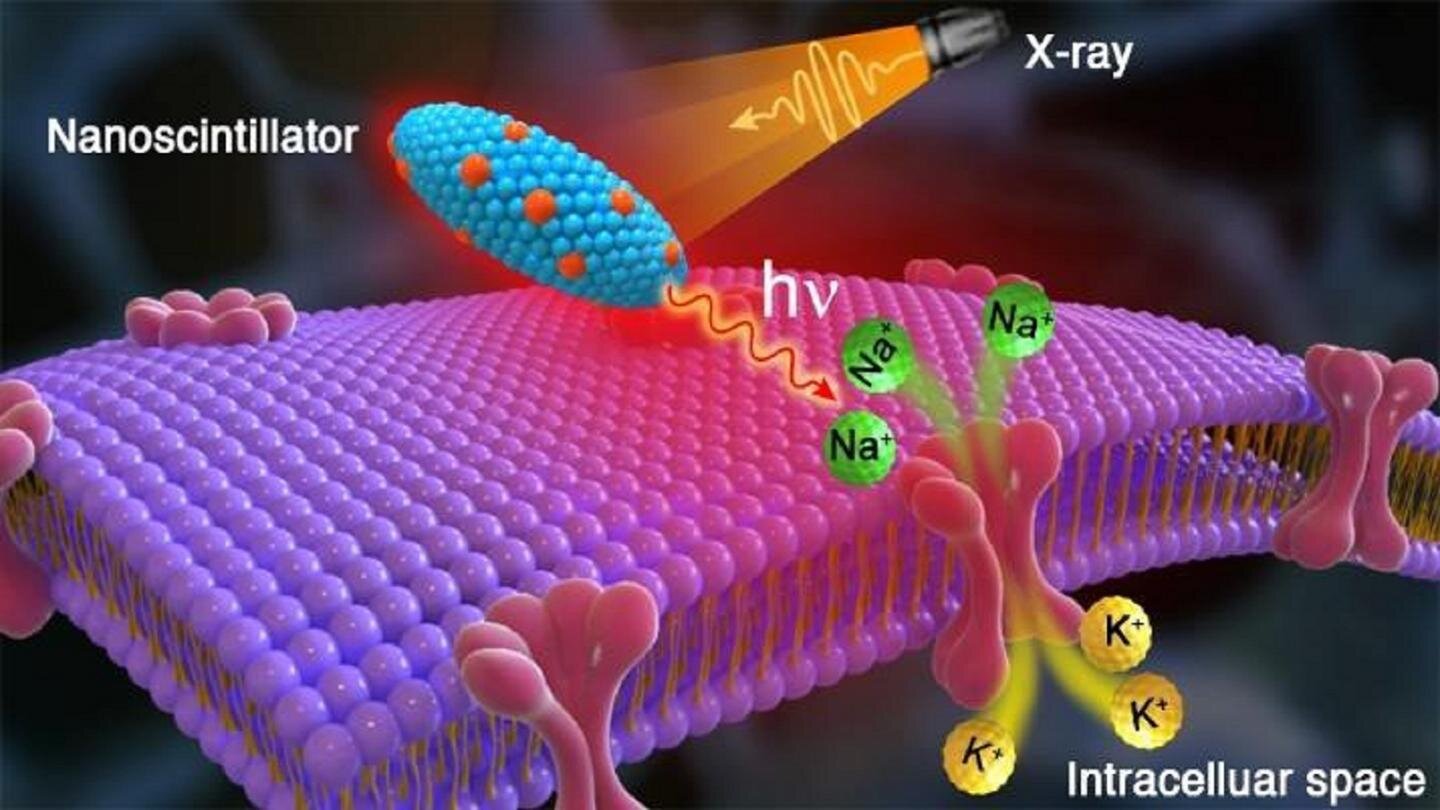 Scientists make a fundamental discovery of a method for the wireless modulation of neurons with X-rays that could improve the lives of patients with brain disorders. The x-ray source only requires a machine like the one found in a dentist’s office.

Relief for some people with brain disorders may one day be on the way in the form of a new treatment invented by researchers at the US Department of Energy (DOE) Argonne National Laboratory and four universities. Treatment is based on advances in both optics and genetics. It would be applicable not only to movement-related brain disorders, but also to chronic depression and pain.

This new treatment involves the stimulation of neurons deep in the brain by injected nanoparticles that light up when exposed to X-rays (nano-sinkers) and would eliminate an invasive brain surgery currently in use.

“Our high-precision non-invasive approach could become routine with the use of a small X-ray machine, the kind commonly found in every dental office,” said Elena Rozhkova, lead author and nanoscientist at the Center for Nanoscale Materials. (CNM) of Argonne. , a user facility of the DOE Office of Science.

Traditional deep brain stimulation requires an invasive neurosurgical procedure for disorders when conventional drug therapy is not an option. In the traditional procedure, approved by the US Food and Drug Administration, surgeons implant a calibrated pulse generator under the skin (similar to a pacemaker). They then connect it with an insulated extension cord to electrodes inserted in a specific area of ​​the brain to stimulate surrounding neurons and regulate abnormal impulses.

“The Spanish-American scientist José Manuel Rodríguez Delgado made a famous demonstration of deep brain stimulation in a bullring in the 1960s,” said Vassiliy Tsytsarev, a neurobiologist at the University of Maryland and a co-author of the study. “He stopped a raging bull charging at him by sending a radio signal to an implanted electrode.”

About 15 years ago, scientists introduced a revolutionary neuromodulation technology, “optogenetics,” which is based on the genetic modification of specific neurons in the brain. These neurons create a light-sensitive ion channel in the brain and therefore fire in response to external laser light. However, this approach requires very thin fiber optic cables implanted in the brain and suffers from the limited depth of penetration of laser light through biological tissues.

The team’s alternative optogenetic approach uses nano-sinkers injected into the brain, bypassing implantable electrodes or fiber optic cables. Instead of lasers, they replace X-rays due to their greater ability to cross biological barriers in tissues.

“The injected nanoparticles absorb X-ray energy and convert it into red light, which has a significantly greater depth of penetration than blue light,” said Zhaowei Chen, a former CNM postdoctoral fellow.

“Therefore, the nanoparticles serve as an internal light source that makes our method work without wires or electrodes,” added Rozhkova. Since the team’s approach can stimulate and quell specific small areas, Rozhkova noted, it has other applications besides brain disorders. For example, it could apply to heart problems and other damaged muscles.

One of the keys to the team’s success was the collaboration between two of Argonne’s world-class facilities: CNM and Argonne’s Advanced Photon Source (APS), a DOE Office of Science user facility. The work in these facilities began with the synthesis and multi-tool characterization of the nano-sinkers. In particular, the X-ray excited optical luminescence of the nanoparticle samples was determined in an APS light line (20-BM). The results showed that the particles were extremely stable for months and after repeated exposure to high intensity X-rays.

According to Zou Finfrock, a staff scientist for the APS 20-BM beamline and Canadian Light Source, “they kept shining a beautiful orange-red light.”

Argonne then shipped CNM-prepared nano-sinkers to the University of Maryland for testing in mice. The University of Maryland team conducted these tests for two months with a small portable X-ray machine. The results showed that the procedure worked as planned. Mice whose brains had been genetically modified to react to red light responded to X-ray pulses with brain waves recorded on an EEG.

Finally, the University of Maryland team sent the animals’ brains for characterization using X-ray fluorescence microscopy performed by Argonne scientists. This analysis was performed by Olga Antipova on the Microprobe (2-ID-E) beamline at APS and by Zhonghou Cai on the hard X-ray Nanoprobe (26-ID) jointly operated by CNM and APS.

This arrangement of multiple instruments made it possible to view tiny particles residing in the complex environment of brain tissue with a super resolution of dozens of nanometers. It also allowed to visualize neurons near and far from the injection site on a microscale. The results demonstrated that the nanosintilators are chemically and biologically stable. They do not drift from the injection site or break down.

“Sample preparation is extremely important in this type of biological analysis,” said Antipova, a physicist in the APS X-ray Sciences Division (XSD). Antipova enlisted the help of Qiaoling Jin and Xueli Liu, who prepared brain sections only a few micrometers thick with jeweler’s precision.

“There is intense commercial interest in optogenetics for medical applications,” said Rozhkova. “Although it is still in the proof-of-concept stage, we predict that our patent-pending wireless approach with small X-ray machines should have a bright future.”

Citation: A new method could shed ‘a healing light’ on the brain for those with movement disorders (2021, March 24) Retrieved March 25, 2021 from https://phys.org/news/2021-03-method -brain-movement-disorders .html