A new document argues that Mars is dry 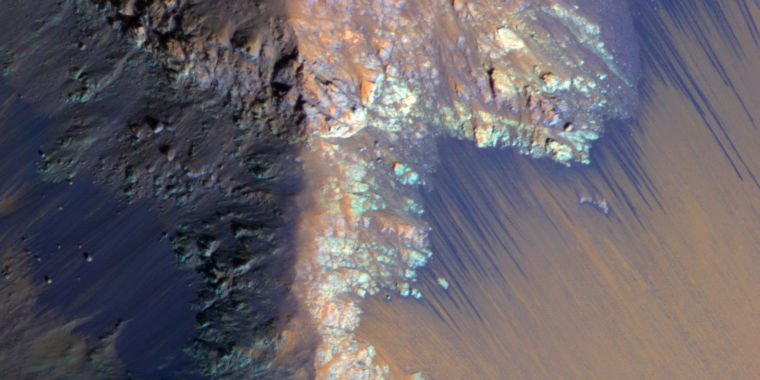 Mars clearly had extensive water in the past, and there is still much of it enclosed like ice in the glaciers and polar ice caps. But the atmosphere is too thin and cold to allow liquid water to exist on the surface, which makes the prospects for life on the red planet much less likely.

However, in 2011, the researchers suggested that, contrary to our expectations, it could still be some water seeping into the surface of Mars. The dark features were identified in a variety of slopes, and appeared to appear during the warmer seasons and disappear as temperatures fell again. The Mars Reconnaissance Orbiter appeared to detect water on the site. But other researchers proposed a physical mechanism that did not involve water that could explain seasonal changes.

Now, a review of the evidence in Nature Geoscience argues that there are problems with almost all the potential causes of these seasonal characteristics. And, in the absence of a convincing argument for water, it is better to badume that harsh conditions mean what we normally thought it was: Mars is a dry planet.

The characteristics in question are called recurrent slope lineae, or RSL. We saw them because we had an excellent camera in orbit around the red planet for more than a decade. That means that many sites have been photographed several times, which allows us to detect changes over time. RSL appears as a darkening on slopes made of loose granular material, essentially piles of sand. Its appearance is seasonal, with the darkest phase occurring when local conditions are heated. They are also limited to the equatorial regions, suggesting that a certain level of heat is needed for their formation.

In general, there is an ascending slope of the underlying exposed rock of the RSL, which provides a potential source of groundwater. And, as mentioned above, the spectroscopic data showed the presence of water in the region.

None of these, however, are slam dunks for the presence of water, according to the new revision. For example, many minerals incorporate water as part of their structure, which may have been what was collected by spectroscopy. The presence of prominent features of the bedrock is also not persuasive, since some of them are quite isolated; they can not be part of a network of fissures through which water flows from an ascending source.

The only plausible way to keep liquid water in Martian conditions is to saturate it with salts, which will reduce its rate of evaporation. But the review argues that it will not reduce it enough. It also notes that the RSL would eventually build a salt deposit near the bottom of the slope, and nothing of this type has yet been detected (the review mentions that it will only take a few years to deposit one cubic meter of salt).

Finally, there is the question of the duration of the RSL. All of them tend to stop just above the bottom of the slope. As the authors of the review argue, "this would require that the liquid volume correspond to the length of the available slope, producing more liquid on longer slopes." Instead, they favor an explanation that involves the flow of loose material from the hillsides. As the grains flow down, they stop naturally as the material accumulates near the bottom of the slope. And, as noted above, a physical mechanism has been proposed that should begin to flow as the area warms up with the change of seasons.

But even the authors admit that there are some problems with this idea. To begin with, when a slope is destabilized and part of the material flows downhill, the larger particles must flow further. This should leave the slope in a more stable state and the RSLs are less likely to appear the following Martian year; instead, they seem to reappear in the same places.

Then there are color problems. The darkening could be attributed to the discovery of material that has not been lightened by its exposure to the harsh Martian conditions. But many of the RSLs show a complicated pattern of darker and clearer features. In addition, there is no obvious mechanism to lighten the RSL again in less than a Martian year. The review suggests that a layer of dust could help, but there should be additional factors involved.

Finally, just like the salt left by the evaporated brines, the downward flow should leave piles of material at the base of the slope and close any features such as rocks protruding from it. But there are no signs of that in most of the images. So, based on these problems, the idea that these flows are granular has almost as many problems as the aquatic explanation.

So, where does that leave us? The document argues that we are back where we started: we do not expect liquid water on the surface of Mars, and RSL simply is not conclusive proof of that. "Flowing liquid water in the current Martian climate has always been an extraordinary claim," the authors write. "The observations and interpretations presented here suggest that RSL is no longer extraordinary evidence." While we are not sure of what they are, they can not be used as evidence of something else.