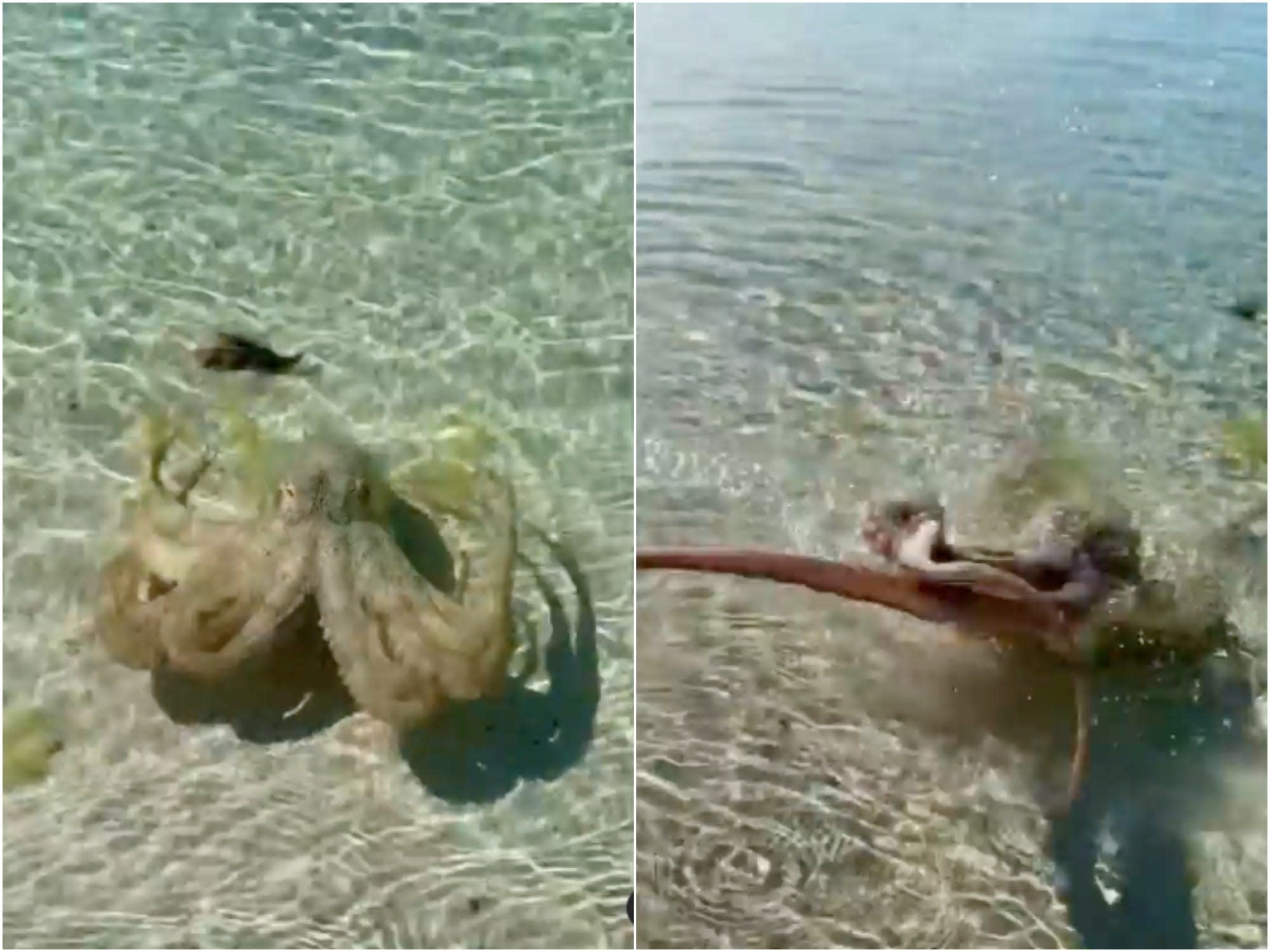 A father was attacked by what he described as the “most angry octopus” off the coast of Western Australia on March 18.

Lance Karlson, a geologist and former lifeguard, was at Geographe Bay in Dunsborough with his two-year-old daughter when he saw the creature in the shallow water, having initially thought it was a stingray striking a seagull.

Karlson filmed some images of the octopus and posted them on Instagram, which has now been viewed more than 221,000 times.

“The octopus attacked us, which was a real shock,” he told Insider.

“My response to the first encounter I captured on film was shock, followed by fascination. I hadn’t encountered an octopus this close before, so at the time, I was mostly intrigued. Keep in mind that I was with my daughter and I think any parent he would identify with being more protective of her than fear of the threat, “Karlson said.

The former lifeguard left the octopus alone and went to pitch a tent later on the beach for his wife and daughter.

Approximately 20 minutes later, Karlson was swimming in the sea on his own (having swam there “many times” before) when the octopus returned – while looking at crab shells in the water about 1.5 meters deep, Karlson was whipped in his left arm.

“My glasses got foggy, the water suddenly turned cloudy and I remember being shocked and confused,” he said. “Then they hit me a second time, harder, on the neck and upper back. I can only describe it as a ‘whiplash’ sensation followed by a prick.”

When threatened, the octopuses spew an ink-like substance, and Karlson believes that it may have unknowingly been in the creature’s home.

He swam back to shore, about 25 meters away, but the encounter left Karlson with red marks on his arm, neck and upper back.

Karlson, who has been a geologist for 13 years, and his family rushed back to their hotel room in search of something acidic for his wounds, unable to find vinegar. They managed with Coca-Cola.

“I didn’t really know if Coke would work, but given how acidic it is, I decided it was worth a try,” he said. “Turns out it works.”

He did not go to the doctor and confirmed in his Instagram stories that he is now fine, that the pain and the marks have only lasted a few days.

Despite the impact of Karlson’s attack, Bryan Fry, an associate professor at the College of Biological Sciences at the University of Queensland, told CNN that octopuses generally do not pose a risk to humans.

“Like all octopuses, it is poisonous, but like most, it is harmless to humans, and the poisons are much more potent in invertebrates such as clams and lobster,” he said.

Karlson’s experience has made headlines around the world, to his surprise.

As a geology student, Karlson attended Cornell University in a student exchange year in 2007-2008. “I remember being asked many times by other students about Australian animals that regularly make headlines in the United States, our deadly snakes, spiders, great white sharks and crocodiles, I would never have imagined appearing in one of those articles! ” he said.

Karlson hopes that people will respond to his story with intrigue and fascination rather than fear.

“These are truly remarkable and highly intelligent creatures that clearly have some very strong emotions,” he said. “I think I just found one one day where he woke up on the wrong side of the bed!”

Read the original article on Insider