June 30, 2020 U.S. Comments Off on A graph explains why Americans face a travel ban to the EU 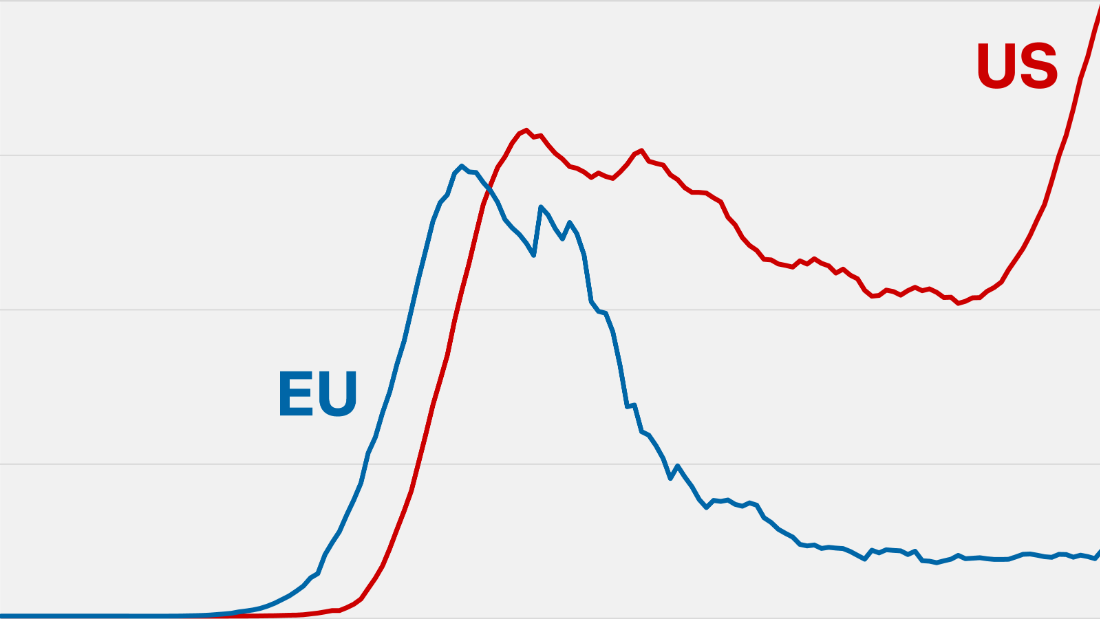 The EU has published a list of recommendations for which nationalities should be allowed to enter its borders, and the United States is not included.

And while United States Secretary of State Mike Pompeo has emphasized the “importance” of reconnecting the United States and the EU during the coronavirus pandemic, a graph shows exactly why European countries are excluding the Americans.

The two curves clearly show the direction of the EU and the US in opposite directions when dealing with the Covid-19 outbreak. New confirmed daily cases in the EU peaked in mid-March and are on a clear downward trend, with cases below 10,000 for more than a month. In the United States, new cases are on a steep upward trajectory.

Many European countries entered a strict closure early, and EU nations have been gradually and cautiously reopening as their cases decline.
Health experts have repeatedly warned that some states in the US reopened too soon, while some administration officials said that US President Donald Trump and his aides were “in denial.” on the severity of the pandemic.
More than a dozen states have now paused or reversed their reopening plans as the United States sees an increase in coronavirus cases.
The United States has recorded more cases and deaths than anywhere in the world, with almost 2.6 million cases and more than 126,000 deaths, according to figures from Johns Hopkins University. Brazil, Russia and India, the three nations with the highest number of cases after the United States, have also been excluded from the EU’s list of safe countries.

The decision is based on whether a country has an epidemiological situation similar to or better than that of Europe, as well as comparable hygiene and containment measures.

Data from the US shows that new cases in at least 36 states are trending up compared to the previous week. State and local leaders have said the increase in cases is due in part to home gatherings and gathering places like bars.
In Texas and parts of California, bars were ordered to close their doors, while the beaches of Miami, Fort Lauderdale, and Palm Beach were banned from the public over the upcoming holiday weekend. In Florida, local alcohol use has been suspended in bars across the state, and in Arizona, many companies are closed for at least 30 days.

New York Governor Andrew Cuomo announced Monday that the state will decide later this week whether to delay the reopening of indoor food in New York City, as “it has been shown to pose a risk in other states.” .

While Europe appears to be going through the worst, at least for now, there have been some localized spikes in the cases. In Germany, authorities were forced to quarantine 360,000 people this week after an outbreak at a meat plant in the state of North Rhine-Westphalia.
Schools and shops in the city of Leicester in the UK, a country that is in transition outside the EU, will be closed again as some coronavirus restrictions are re-imposed because their infection rate is three times higher than the next highest local area.

Despite these resurgences, the EU is in a position to gradually reopen its borders to other countries.

But for now, the United States it just doesn’t meet the criteria.