A dumpster will do that – tech2.org

A dumpster will do that 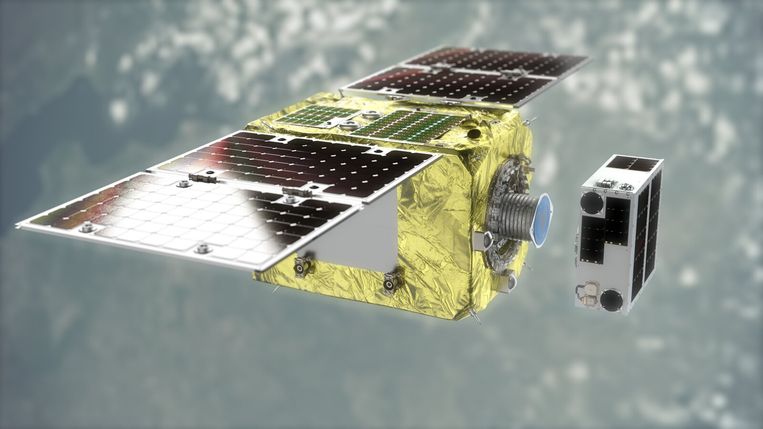 It is slightly smaller than a garbage can and has roughly the same purpose: to collect waste, but in space. The device is called Elsa-d and it will depart from the Russian Baikonur launch site next week. Elsa-d was built by Astroscale, a Tokyo-based trading company with offices in several countries, including Great Britain. Astroscale was founded seven years ago and provides governments and (telecommunications) companies with cleaning up debris from their space activities (see box).

Elsa is an acronym for Astroscale’s End of Life Services. The letter “d” denotes the explanation. The device shown in the image consists of two parts. The big piece, with solar panels, is called a service. The smallest block is your customer, who is the size of the moving box. These two are glued. But when the Elsa-d goes into orbit with a Soyuz missile, it will release its client, a few meters away, and then catch it again.

Elsa-d uses a magnetic arm for this purpose, and the first test should show that it is operating in space. In a second experiment, it becomes more complicated. Not only does space debris hang a few feet away and remain stationary, it flies through space on all its axes. In the second test, the client will be released again, but with one click, causing unexpected crashes. In addition, it is hundreds of meters from the service.

Elsa-d must now get closer to her client, measure what she is doing, and start doing the exact same turning movements in order to grab the client again with her magnetic arm. In a third experiment, the client will be many miles from the server, and Elsa-d must show that she can locate and then seize a specific piece of space debris orbiting the Earth.

The final part of the mission is waste disposal: the servant and his client go down to Earth and are released into the atmosphere. Due to its high speed, the resistance of the air causes heating and the garbage and its space debris are burned. If you want to get an impression of the entire Japanese mission, you can watch the animation below.

The mission that begins next week must primarily demonstrate that the technology developed to remove space debris is working. Astroscale is already working on the next step. The company received a contract last month from the Japanese space agency Jaxa. Like other organizations in the United States (NASA) and Europe (ESA), JAXA understands that the immediate vicinity of the Earth must be cleaned up to avoid deadly collisions by cutting through space debris.

In the first project, Jaxa wants to remove the last stairs of a missile launched earlier. The giant, which weighs several tons on Earth, is floating in orbit around the planet. Picking it up and cleaning it would be a completely different story than the Elsa-d mission. However, the missile’s stage is several times larger than that of the customer. Elsa-d will play, she has no iron and cannot be caught with a magnetic arm.

In this case, it is likely that a robotic arm can be developed that can accommodate the obsolete part of the missile. But this is for later. In the first part of this Japanese mission, Astroscale will launch a satellite to closely examine this piece of space junk, from a distance of several meters, and map its immediate surroundings. It has to be done next year, after which Jaxa can think of a second stage on how to get the Colossus into the atmosphere for cleaning.

Robotic arms are the technology that ClearSpace also chooses. This young Swiss company originated at the Technical University of Lausanne three years ago and recently won the first contract offered in the new debris removal program for the European Space Agency (ESA).

In this first mission, ClearSpace will launch a four-armed robot from the Kourou launch site in French Guiana in 2025. It has to use it to recover part of a missile launched in 2013. The part that is now orbiting the Earth is very large. ; You will weigh over a hundred pounds on Earth.

In the microgravity of near space, almost none of this weight remains. This sounds useful, but it makes recovering space junk very tricky – a bit wrong and a piece of junk can disappear from view at any moment. Or worse, it can be damaged and shattered, adding to the problem of space debris. Also in this case, the debris removal machine, simply called ClearSpace-1, must first find out precisely where the piece of space debris is and how it is spinning, in order to capture the giant on a trajectory.

It’s a € 100 million project and it was a surprise that Esa was awarded to it by a young Swiss company. Switzerland is a member of the European Space Agency, but it is not a major country in space flight. Why does ClearSpace Swiss start? “Why not?” Said founder Luc Piquet recently in an interview with Innovaud, the Swiss innovation agency. “Our country has great universities and engineers, and a long tradition of craftsmanship. The people of Made in Switzerland associate high quality with reliability, and this also applies to aviation technology ”.

According to the Japanese Nobuo Okada, founder of Astroscale, it will be a matter of preparing satellites before departure for disposal at the end of their working life. Your company developed a round plate with optical and magnetic properties, which is now installed at the customer. This allows Elsa-d to find and magnetically connect the client. This panel can be installed on any future satellite. Scrapers would help.

Space is cold and empty, but near Earth there is a landfill. More than half a million pieces of space debris orbit the Earth. A small part has a natural origin: meteorites that orbit the sun like Earth and approach the planet. But most of it is human debris, ranging from tiny chunks to whole rocket chunks orbiting Earth.

This space debris is not only a disgrace, but also a great danger. The pieces rotate around the Earth at a speed of 28,000 kilometers per hour. At these speeds, even the smallest particles of debris can cause a devastating collision with satellites orbiting the Earth or, for example, with a space station.

Known collisions included in 1996 when a French satellite was damaged by the remains of a missile – also French – launched ten years earlier, and in 2009 when a retired Russian satellite collided with a US commercial satellite, which not only spelled the end of the lifespan of the latter, but an advantage. It added about two thousand pieces of debris to the garbage cloud.

Therefore, the possibility of colliding with existing space debris is really great. The chaos continues to grow as humanity brings more and more equipment into space. In the first decade of this century, an average of 72 satellites were put into orbit each year. There are now more than 125 a year, ESA said, and the number will increase dramatically as new and advanced versions of the Internet are created.

In fact, the International Space Station and larger satellites sometimes have to change course a bit to avoid hitting debris. But not all space satellites have the engines to do this.

Space organizations have developed guidelines in consultation around the world to reduce launch debris and bring satellites that are no longer in orbit where they do not get in the way. These guidelines are not enough. Some debris must be removed to reduce risk. If more dangerous items are chosen, the number to be saved will be limited. The technology for this is now under development. But they are very expensive missions.

Avi Loeb got all the knowledge when he stated that “Oumuamua, the object that crossed the solar system in 2017, had such a strange origin. In your answer, you describe your colleagues as shortsighted.