A 1,000-degree fire continues on the Navy ship in San Diego 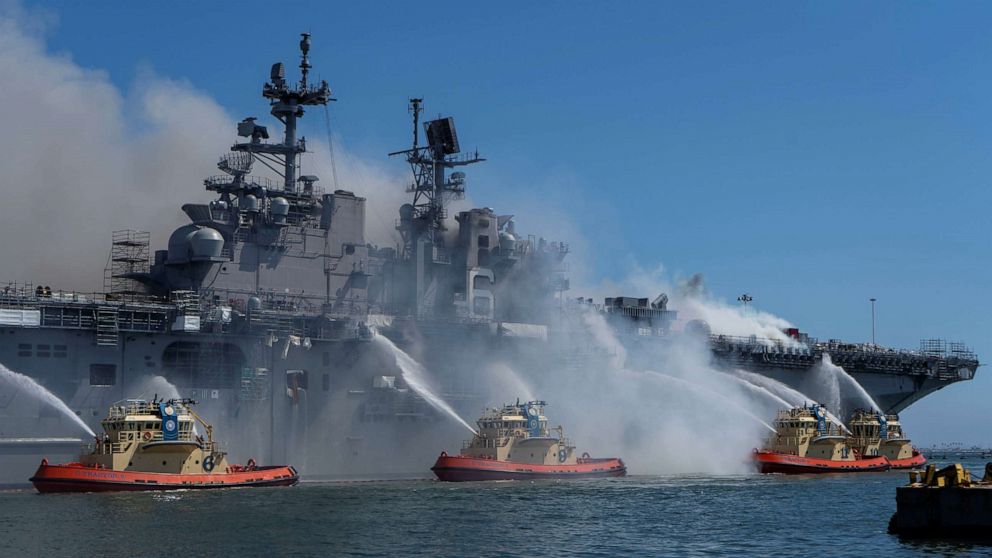 The fire knocked down the front mast of the USS Bonhomme Richard.

More than 400 sailors are working to put out the massive fire that continues to rage aboard the USS Bonhomme Richard in San Diego, and Navy officials are unclear how long the fire could continue to burn.

The fire knocked down the front mast of the amphibious assault ship and caused further damage to the ship’s superstructure rising above its flight deck.

“There is a tremendous amount of heat underneath and that’s where it is, it’s blinking, also forward, closer to the bow there is again a heat source and we’re trying to get there as well,” Rear Admiral Philip Sobeck said commander from Expeditionary Strike Group 3 at a press conference Monday in San Diego.

Sobeck said temperatures in the fire’s heat sources reach 1,000 degrees. At such high temperatures, sailors are rotating in 15-minute shifts to fight fires.

When asked if he believed the ship could be saved, Sobeck said: “I feel absolutely hopeful because we have sailors who give it all.”

He also expressed confidence that the fire will not come close to the ship’s supply of one million gallons of fuel, which is located two decks below the fire.

The fire continues to cause damage to the ship’s superstructure, which towers above its flight deck and has knocked down one of the two masts that rise above it.

Sobeck acknowledged that the ship’s Halon fire suppression system, which could have put out the initial fire, was not activated because it was also undergoing maintenance.

“Again we augment that with fire fighting elements from the dock and the shipyard,” Sobeck said.

Teams of sailors were pouring water onto the boat from the dock and from the tugs beside it. Navy helicopters have also dumped 415 buckets of water onto the ship to contain the fire, just as they have in the past to help put out wildfires.

There were 57 sailors injured after the fire started aboard the ship on Sunday, most have been treated for exhaustion and smoke inhalation. A US official told ABC News that the last five individuals who remained hospitalized were released from the hospital.

Sobeck had no information on how the fire started, but said it originated in the “bottom V” part of the ship’s aft section, which normally contains equipment used by Marines when they are aboard the ship. Since the ship has been under maintenance, it has been used to store maintenance supplies, including many cardboard boxes.

“Because the ship was in the yard, there is a lot of scaffolding and a lot of debris on the way,” Sobeck said, explaining that it has hampered firefighting efforts.

He said the initial fire was too much for sailors on board the ship at the time, so they called San Diego civilian fire units to help. But the fire continued to expand, triggering an explosion aboard the ship.

Addressing concerns in the San Diego community that smoke from the fire may contain environmentally hazardous materials, Sobeck said he was aware that plastics, cables and rags had been burned.

“Right now, we are testing and verifying everything we know and we are within EPA standards,” Sobeck said. “There is nothing else on board the ship that is toxic in nature” other than the fuel on board.

“As we continue to fight the fire, we remain aware of air and water quality concerns, and we recommend that you follow the county’s safety warnings with great caution,” he added.

The US Coast Guard has also hired a protective deployment around the ship to protect itself from potential environmental problems. A one-mile temporary and nautical flight restriction zone has also been established around the ship to ensure the safety of firefighters and the public.

Similar to a smaller version of an aircraft carrier, the USS Bonhomme Richard is one of nine amphibious assault ships in the Navy. When deployed, the ship carries a variety of marine aircraft, including tilt-rotor ospreys, Super Cobra attack helicopters, and vertical take-off versions of the F-35 Lightning fighter jet.

The extensive damage caused by the fire will leave the Navy with the difficult choice of trying to return the ship to service, a process that could take years, or decide to take the ship out of service.