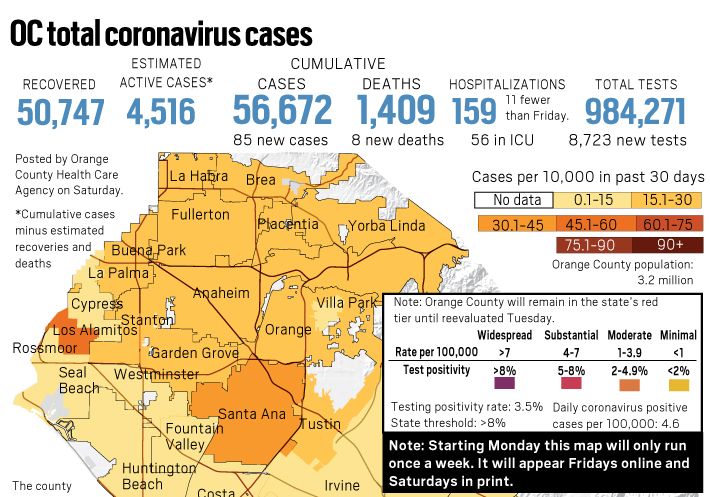 The county has received an estimated 5,273 cases in the last 30 days.

There were eight new deaths from coronaviruses reported on Saturday, with a total of 68 deaths between the last four updates – but county health officials said that doesn’t mean all eight deaths have occurred in the past few days.

Officials say data on deaths in the county are either compiled from the Death Certificate or collected during the investigation of the case and may take several weeks. County Health Officer Drs. Clayton Chow said at a news conference that the most recent deaths occurred on October 12, but some reported a June date.

There have been 1,409 virus-related deaths in the county so far.

Of the deaths in Orange County, 524 were residents of a skilled nursing facility, 111 were in assisted living facilities, and four were listed as homeless.

The sequence of deaths by age in the county is as follows:

It is estimated that about 90% of the cumulative reported cases, or 50,747 people, have been recovered by Saturday. The count of those recovered is based on a prior 28-day cumulative case count.

The county also reported 159 patients at hospitals with coronaviruses on Saturday. The peak of hospitalized patients in Orange County was 722 on July 14. Saturday’s report listed 56 patients in the ICU.

The county update also reported that 984,271 trials for coronovirus have been conducted since the testing began locally, and at least 8,723 trials were conducted in the last 24 hours.

This map shows the county’s breakdown of deaths by zip code until October 5.