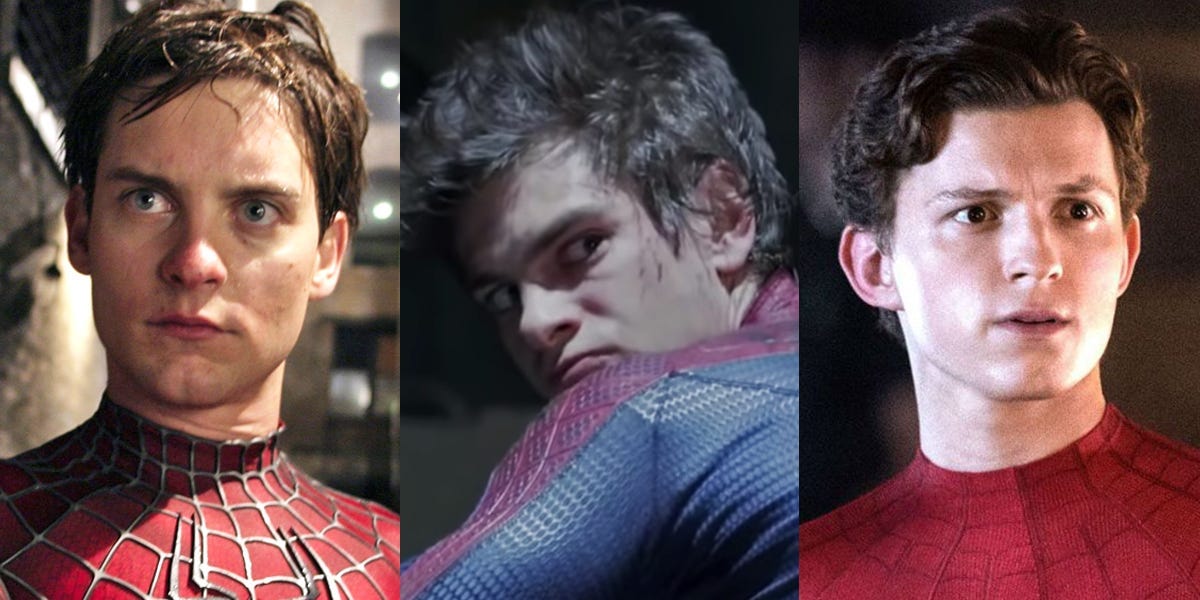 The third installment in Jon Watts’ “Spider-Man” franchise, starring Tom Holland, will be released in December, and fans can’t help but think that the film will include Tobey Maguire and Andrew Garfield.

Eagle-eyed fans have been following numerous reports about the aforementioned actors, who played the iconic webslinger in separate franchises. Rumors spiked significantly after the title of Holland’s third “Spider-Man” film, “Spider-Man: No Way Home,” was revealed on Wednesday.

Here’s what you need to know about the various reports that have gained traction, and how plausible fan theories are based on where the Marvel Cinematic Universe is headed.

On October 12, 2020, FandomWire published an article claiming that, according to an anonymous source from Sony (the studio that co-produces the films with Marvel), Maguire and Garfield have signed on to reprise their roles in the upcoming film.

Maguire was the first actor to play Peter Parker / Spider-Man in a major movie, beginning with “Spider-Man” in 2002. He returned as the title character in the sequels released in 2004 and 2007 as part of the Sam Raimi trilogy. .

Garfield played the role in the “The Amazing Spider-Man” films that hit theaters in 2012 and 2014.

Since then, he has spoken of feeling “heartbroken” by the direction his franchise took, telling Amy Adams, “The story and the character really weren’t at the top of the priority list, ultimately, and That seemed very, very complicated to me. “

Days after the FandomWire report, a Sony Pictures representative told Entertainment Tonight Canada: “Those casting rumors are not confirmed.”

By the end of october Holland headed to Atlanta to begin film production.

in a video Shared on social media, Holland said he received the script and vowed to keep his spoiler habits in check “because I learned my lesson,” hinting at his tendency to dole out spoilers.

Then, on December 9, Collider reported on the involvement of several previous “Spider-Man” actors. According to the post, Garfield will reprise his role and Maguire was still in talks with Sony / Marvel.

The next day, Maguire, whose most recent acting credit was voice work for the 2017 animated film “The Boss Baby,” was photographed in the Wardrobe Workroom parking lot in North Hollywood, California. It’s unclear why the actor was in a costume fit. On his next project titled “Babylon”, he is said to serve as a producer.

An interview Holland did with Jake Hamilton to promote “Spider: Man Far From Home” in 2019 as well resurfaced when fans noticed that the actor seemed nervous when asked about the possibility of a multiverse involving the Spider-Man versions of Maguire, Garfield and Holland.

Holland was seen toying with his thumbs and turning to co-stars Jacob Batalon and Zendaya to handle the question.

Then he said, “It would be amazing. It would be really cool. And it’s something the fans really want. So whether Marvel and Sony decide to do that is up to them. It’s not up to me.”

Holland has continued to deny the reports, but that doesn’t necessarily mean that Maguire and Garfield don’t appear in the film.

In an Esquire cover story published in February 2021, Holland said, “No, no, they won’t appear in this movie.”

“Unless the most massive information has been kept from me, which I think is too big a secret to be kept from me.” “But so far, no. It will be a continuation of the ‘Spider-Man’ movies we’ve been making.”

He made a similar comment during a virtual appearance on “Tonight Show Starring Jimmy Fallon” the same month, saying:

“It would be amazing if they were because they haven’t told me yet, and I’m Spider-Man and I’ve read the script from start to finish,” Holland said, referring to Marvel. “So it would be a miracle if they could have kept that from me, but at the moment there is no cameo from the two boys.”

Given Holland’s history of spoiling details about past Marvel movies to fans and even his co-stars, it’s possible that after starring in five MCU movies, he’s better at keeping secrets.

Still, he could be lying because Marvel projects are generally shrouded in mystery prior to release, so they probably wouldn’t allow anyone to confirm such an important aspect. You might also be unaware of these castings and story lines.

Even stars like Paul Rudd and Benedict Cumberbatch, who play Scott Lang / Ant-Man and Steven Strange / Doctor Strange in the MCU, previously denied their involvement before making their superhero debut.

Although the titles were meant to be jokes, fans over-analyzed the phrases and colors used for each logo.

People theorized that the fake titles could be referring to the three big screen versions of Spider-Man.

Fans said “Home Slice” could be a nod to Maguire’s character as a pizza delivery boy, while “Home-Wrecker” could refer to Garfield’s Spider-Man driving a wedge in Gwen Stacy’s family. Meanwhile, Holland’s “Phone Home” could be referring to his version of the young webslinger who often turns to others for help.

in a viral tweet, another fan said that when the logos are arranged in a specific order, the color schemes align with an image of the popular Spider-Man villain Green Goblin from the comics standing on his silver glider and holding his bombs. pumpkin.

The actual title, “No Way Home,” also implies that perhaps Spider-Man gets trapped in the multiverse.

The concept of the multiverse – the existence of more than one universes – has emerged in “Doctor Strange”, “Spider-Man: Far From Home” and the animated film “Spider-Man: Into the Spider-Verse.”

It will continue to be explored in phase four of the MCU, especially since the shows and movies are interconnected.

Cumberbatch will reportedly appear in “Spider-Man: No Way Home,” which makes sense because the two superheroes are based in New York. Additionally, new footage from “No Way Home” suggests that Peter and his friends might visit Doctor Strange’s Sanctum Sanctorum.

The multiverse could also explain why Molina and Jamie Foxx (Electro in “The Amazing Spider-Man 2”), who played Spider-Man enemies who were apparently killed, will reportedly appear in “No Way Home.”

More evidence of the multiverse can be seen in Marvel’s “WandaVision,” which is currently airing on Disney Plus. The mysterious mention of Nexus in the series could point to the multiverse at stake.

“WandaVision”, in turn, prepares the sequel to Doctor Strange, which is titled “Doctor Strange in the Multiverse of Madness” and presents Elizabeth Olsen reprises her role as Wanda Maximoff / Scarlet Witch.

If ‘No Way Home’ turns out to not include Maguire, Garfield, or previous co-stars, it’s likely still got some impressive moments.

Holland described “No Way Home” to Variety as “the most ambitious independent superhero film ever made.” Also he said Yahoo! that he was filming an “awesome” fight scene for about a month, which is a significant amount of time to spend on a sequence.

Additionally, he promoted the film with a post shared on Instagram in late January 2021, which shows him and his younger brother Harry Holland (who has a minor role in the film) together on set.

Fans will have to wait until “Spider-Man: No Way Home” hits theaters this Christmas to see how many (if any) of the theories and speculations turn out to be true.