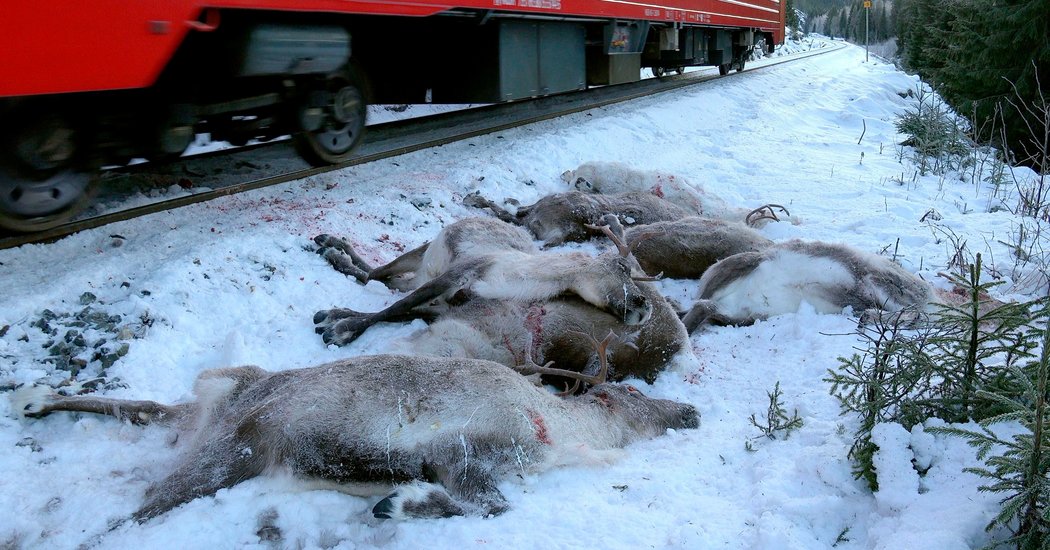 Mr. Appfjell said he had fired about 15 reindeer that had no chance of surviving, to get them out of their pain. Then, he said, he had to drink whiskey to calm his nerves.

"It hurts, because we know each and every one of our animals," he said. "When you work, you see things like this often and you let go of your feelings, but this particular scene will burn in the back of my eyes forever, sixty-five animals in a collision: it's a catastrophe."

Bane NOR, the railway company, confirmed that 110 reindeer had died in eight accidents from Wednesday to Saturday. Thor Braekkan, manager of the northern branch of the railroad, said there were three major collisions: one on Wednesday that killed 26 reindeer, one on Friday that killed 15 and one that killed 65 on Saturday.

"We are now carefully investigating the circumstances of the warning chain, from the pastor to Bane NOR and then to the driver," he said.

Such collisions are not uncommon. Since 2010, 200 to 600 reindeer have been in accidents related to the train every year, estimates the railway. Last year, 2,016 animals – moose, deer, reindeer, sheep and others – were killed.

But the concentration of deaths in a short space of time has been news in Norway and elsewhere in Scandinavia.

"The accident on Saturday is the biggest I can remember," said Mr. Braekkan. "It does not surprise me that it has attracted attention, it is a tragic event."

Train crews are instructed to slow down in areas where migratory flocks are present, and the railroad was trying to find out if the train driver knew Saturday about the pack in the area. 19659009] Continue reading the main story

After an avalanche of similar deadly collisions in 2010, Bane NOR erected fences in several areas of northern Norway, but Mr. Appfjell said that additional enclosure was needed.

Silje Karine Muotka, a member of the Sami Parliament of Norway, representing the interests of an indigenous people sometimes referred to as Lapps or Lapps, said the community had repeatedly called on the government to build more fences.

"The situation is unacceptable," he told the VG newspaper. [19659013] Live Kleveland, a lawyer and spokesperson for the Norwegian Alliance for Animal Protection, a defense group, said it was "very critical" for the government to take new measures to prevent accidents.

"Trains that kill deer, elk and other animals have been a horrible problem in Norway for years," he said in a telephone interview. "It is appalling, because many animals are not killed instantly, but they bruise and suffer long before they kill or die alone.

" The government needs to address the situation with more barriers in some places and mandatory reductions in speed in another. We want digital surveillance to be implemented. Modern technology should make it easy to warn train drivers. "