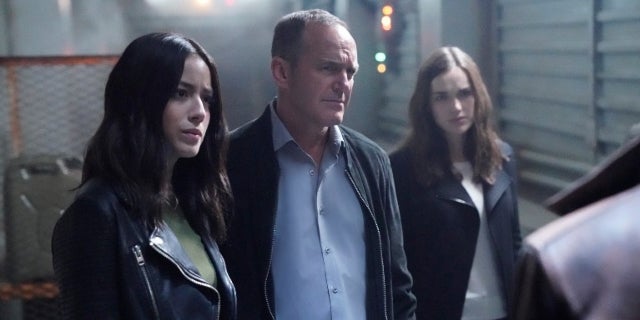 The episode opens with shots of a child's drawings. The man who took the SHIELD team from Coulson enjoys a little time in the pool. Take out a softly labeled container from your fridge. He removes human skin to shower, put on a suit and drives to an air hangar. He meets a man who has a white van. Man digitally exchanges paint on the side of the van. The agent loads the truck with a tactical attack team and they leave.

The truck arrives at Rae's restaurant. The attack team turns off the electricity in the restaurant block, then turns on the searchlights and torments the diner. Some guards outside make a small talk while the agent's team loads the SHIELD team minus Fitz, who "was not on the list". The van leaves and the lights are restored.

The SHIELD team is unloaded, and as soon as possible. When they recover the agency, a monolith washes them. Coulson is looking over an asteroid field through a broken window in some kind of spacecraft or space station. Everyone around you is frozen in time.

Coulson grabs a bar bolted to the wall just as time resumes, and a man is sucked out the window.

Two other men argue for having gone out the window and letting the man die Coulson reveals himself, and one of the men seems to have been waiting for him. Before the man can explain, they hear a noise similar to an animal from outside the room. One of the "badroaches" grabs one of the men and pulls him out.

Coulson insists that the other man, Virgil, explain what is happening. Virgil says he is a true believer in Coulson, just before Mack appears and unconscious Virgil.

Yo-Yo appears elsewhere on the ship. She starts hitting someone with a gas mask until someone removes the mask and reveals that she is Simmons. Simmons examines some corpses on the ground and discovers that they have been dead for a while, but all the fluids were drained. Mack and Coulson arrive, dragging Virgil's unconscious body.

A man with a helmet enters the structure through the same broken window that Coulson was looking at.