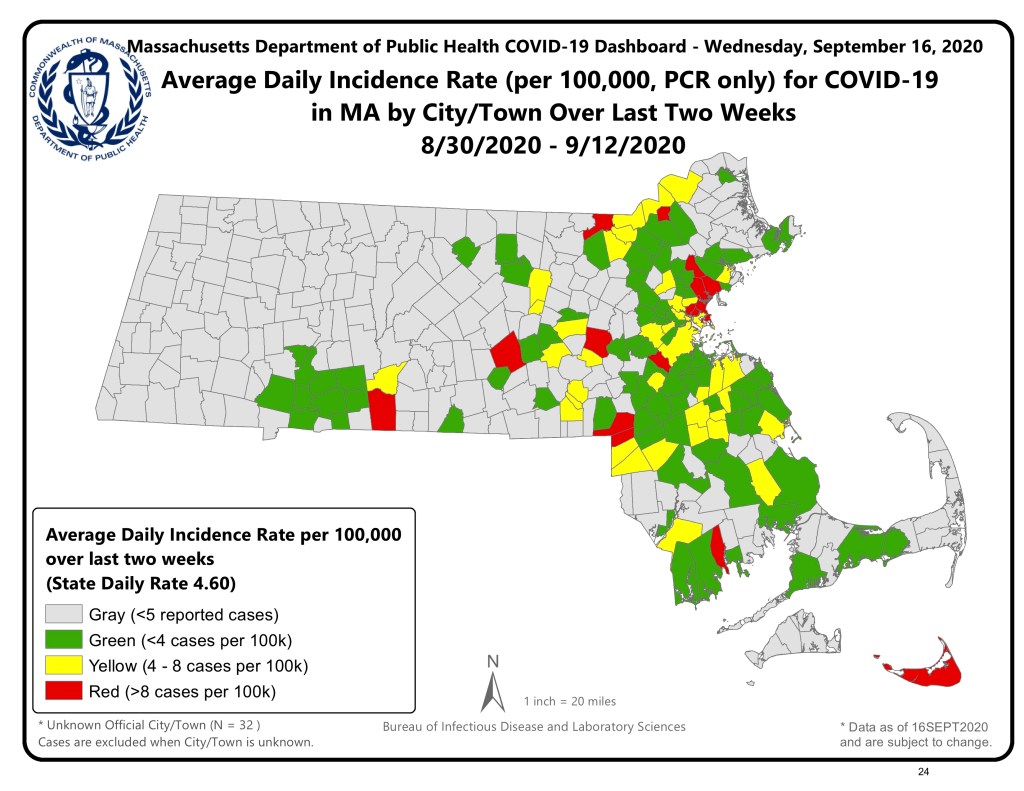 According to state data, the number of high-risk cities and towns for coronovirus has more than doubled in the past two weeks, from 13 last week to 13 this week.

The state’s Department of Public Health began reporting weekly data in August using a color-coded risk assessment system, since which 17 communities represent the largest number of cities and towns in Hot Town, a high-risk The communities are red in color.

Chelsea, Dedham, Everett, Framingham, Lawrence, Lynn, Lynnfield, Monson, New Bedford, Revere and Winthrop were on the high-risk list for the second consecutive week, according to data released on Wednesday.

Saugus returned to the list, adding Nankut, Plainville, Tynesboro, Worcester and Rentham, while Chatham and Methuen closed. Communities in the Red Zone report a daily average of eight or more COVID-19 cases per 100,000 residents over a two-week period ending on Saturday.

Nantucket officials wrote in a statement on Friday that there was a “September surge”, including community transmission of the virus.

“We have regained our mission,” board chairman Don Hill Holdgate wrote, advising residents on best practices to stay safe on the island, preventing the spread of COVID. “The current boom is evidence that even some ‘exemption’ is dangerous.”

Dedham continues with state-sponsored coronovirus testing on Thursday after an increase in cases involving groups at two mass gatherings of young people recently.

“We are urging more and more people to test,” Deadham Town Manager Leon Goodwin said in a statement.

The number of medium-risk communities – with four to eight cases per 100,000 residents – was 36 this week. Roughly 80 cities and towns were listed as low risk, with fewer than four cases.

The 295 new cases bring the total estimated coronavirus cases to 123,720. A further 11 possible cases were reported on Wednesday, with a confirmed total and a potential case of 125,699. More than 109,000 people have now recovered.

The state also reported cumulative testing between colleges and universities for the first time this week, stating that 499 cumulative cases have been confirmed in 59 schools testing on campus. Of those, 168 were reported from the previous week.

In total, colleges and universities have tested 518,904 for novel viruses and 532 have come out positive. Some 153,675 of those tests were conducted in the last week alone.

Home prices rose 4.8% in July, according to the Case-Schiller index

New danger in sight? Indian media warning of another virus outbreak in China